Darwin - The City and Beyond

Darwin is a city on the edge, writes Megan Czisz.

It's on the edge of a continent and feels like it's at the end of the world. From the air it’s an incongruity, appearing suddenly from nowhere, just as you think you're leaving the wide brown land behind. It's a cluster of buildings at the remotest tip, a final outpost jutting out into the Arafura Sea. And it's at the edge of cool without even trying - Lonely Planet named it as a hot tip for travel in 2012, and someone is in the know because in the same year the number of Australian travellers visiting the Northern Territory increased by more than 10%. But why not fly right over, all the way to Bali? It's no secret that Australians are flocking overseas in record numbers and the tourism industry is struggling to entice people into their own backyards. “I guess I should try and see more of my own country” is a common refrain when you meet Australian backpackers overseas. They lament that they've visited countries with names they can't even pronounce but have never made it further north than the Gold Coast casinos.

Above all else, Darwin feels different. A tour guide tells me that the population is transient, fluctuating with the wet and dry seasons. “It's the only place in the country”, he says, “where corporates wear stubbies and thongs”. A thousand kilometres from anywhere, the faces are diverse - it could almost be Asia. In fact, it's closer to Asia than Sydney or Melbourne could ever hope to be. It’s this diversity and its geographical and spiritual remove from the rest of Australia that means travellers visit, intending to stay a few days and end up staying longer than their visas could possibly allow.

For the food
Darwin has its fair share of backpacker pubs with $5 chicken parmis and a burgeoning bar and restaurant scene but it’s at the city’s markets where the proximity to Asia is at its most palpable. At the Mindil Beach Sunset markets the crowd heaves with visitors and locals alike. There are buskers – fire twirlers, bongo players, a trio of Peruvians playing flutes and the air smells of spice and barbeque smoke.

That’s the food. Pad thai, bahn mi, laksa - not words that are missing from the foodie lexicon of the southern cities. Nor are they in Darwin, where the food is authentic and the market stalls are manned by people from all over – Sri Lanka, Malaysia, China, Vietnam, Indonesia, Thailand, East Timor, Vietnam and more are represented. Business is only quiet when the sun begins to set and the crowds rush down to the sand to watch. Darwin and its surrounds are a photographer’s dream. An early morning cruise on Yellow Water Billabong in Kakadu National Park, where the landscape is so serene it’s difficult to imagine killer crocs lurking below the water until one surfaces beside your boat and glides along the waterway after you, is unforgettable.

At Gunlom Falls, the reward for a hot and sweaty climb to the top of the waterfall is a swim in a natural infinity pool – it might not have cocktail waitresses like the one at Marina Bay Sands in Singapore, but with views that stretch further than a cityscape ever could, who cares?

For the history
In Europe, you never forget that you’re walking on cobblestones that might have been there 500 years. History in the top end goes deeper than that – you just need to look a little closer – and know what you’re looking at. Nourlangie Rock Art site in Kakadu National Park, 200 kilometres from Darwin, is home to the Anbangbang rock shelter, a refuge for Indigenous people for 20,000 years. The only visible sign of habitation is an overhanging rock and smoothed stone. Some of the ochre drawings that cover the walls in what is now known as the main gallery have been there just as long.

Darwin YHA – Melaleuca on Mitchell is located in the heart of Darwin's nightlife hub, Mitchell St, with not one but two pools, a licensed bar, and a massive sundeck. 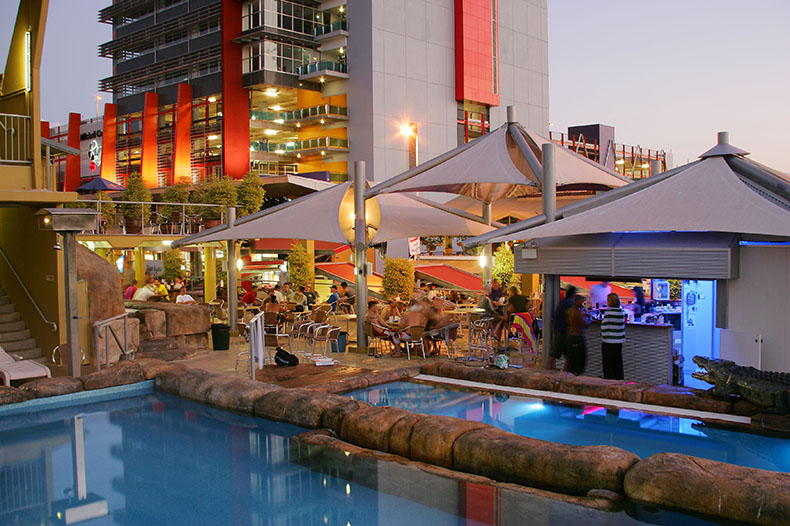