Why the Fleurieu Peninsula is a water baby’s paradise

Swim, splash, surf, stroll and skydive your way along the South Coast of South Australia with these seven spectacular seaside activities. 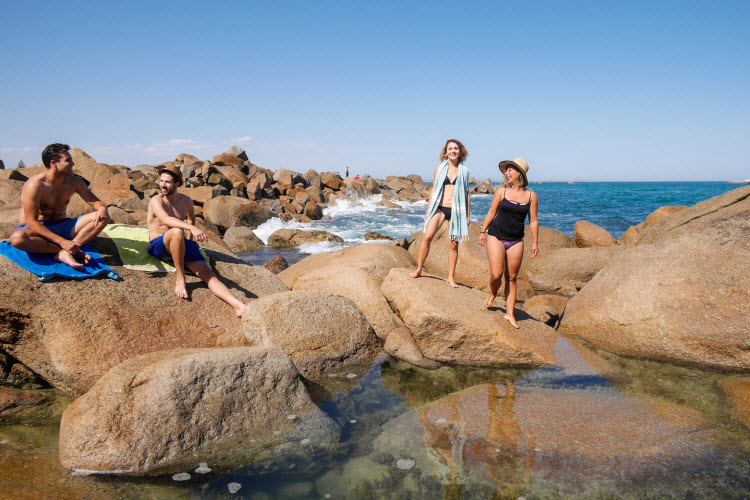 Wonder why they call tuna the “Ferraris of the ocean”? You’ll understand when one of them goes whizzing past your head to pluck a sardine out of your fingers at a hundred miles an hour. Experience the sensation at an in-sea aquarium near Granite Island just off the Fleurieu Peninsula, where you can go for a dip with schools of speedy Southern Bluefin Tuna.

Middleton Beach is one of the best learner waves in Australia, so if you want to dip your toe into surfing, the Southern Fleurieu is your spot. Book yourself in for a surf lesson or two and you'll be riding the waves in no time. Gnarly.

Check out the beaches

It’s not just surfing you can do at the long list of golden beaches lining the Fleurieu Peninsula. There’s the family friendly Horseshoe Bay in the shadow of Port Elliot YHA, snorkelling in the pristine waters of Aldinga and Sellicks Beach, reefs at Normanville and Second Valley, the photogenic shipwreck at Port Willunga, and of course surfing at Middleton and Goolwa Beach.

Coorong National Park protects a string of stunning saltwater lagoons sheltered from the Southern Ocean by the rolling sand dunes of the Young Husband Peninsula… and the best way to explore these waterways is by kayak. The area also carries immense cultural significance to Indigenous people, and was the setting for the classic Australian film Storm Boy, as well as the soon-to-be-released remake.

Stroll along the coast

There are so many gorgeous coastal walks near Port Elliot your Fitbit won’t be able to keep up! Lace up your walking shoes and step past dramatic clifftops, sweeping surf beaches, quaint country towns and even the odd whale or two during winter.

If you want to see the incredible diversity of wildlife this part of the world has to offer, book your spot on a Big Duck boat tour. Zip around the picturesque coastline to spot seals, sea lions and dolphins at Seal Island and Wright Island as well as whales in season (June to October).

The best way to take in spectacular views of the entire peninsula? Jump out of a plane thousands of metres in the air! Get some adrenaline pumping through your veins as you skydive from 9000, 12,000 or 15,000 feet, hurtling towards the sand on the beach at 220km/h.