They're the happiest animal in the world and there's only one place in the world you can see them - Australia! Before you book your tickets to Rottnest Island (and your accommodation at Fremantle Prison YHA, of course), educate yourself on everything you need to know about these cheeky critters...and enjoy some heart-warming photos while you're at it.

They’re bigger than you think

Quokkas look teeny tiny in photos, but they’re actually roughly the size of a small cat – especially when they get on their hind legs and have a biiiig streeeetch!

The island is named after them

Quokkas are such show-stealers, their entire home is named after them! Dutch captain Willem de Vlanmigh named the island ‘t Eylandt Rottenest (Rat’s Nest Island) in 1696, mistaking the quokkas for giant rats!

Like their kangaroo relatives, quokkas move around by hopping and bounding, or moving forward using their hands.

But, they can also climb trees

You mainly see quokkas on the ground, but unlike their bigger 'roo cousins, quokkas can climb trees if they need to – with heights of up to 2 metres! Mainly, they do it to get food. Feels.

"Hey, get down from there!"

They can survive a long time without food and water

Quokkas store fat in their chubby lil’ tails as a means of surviving when food supplies are low, and they can also go months without water.

They swallow food whole, then they regurgitate it and eat it again!

It sounds pretty gross, but this allows them to absorb the nutrients of their food better. And honestly? They’re still adorable.

They are peaceful with each other

Unlike their boxing kangaroo relatives, quokkas are not territorial and are very happy to share space, food and shelter!

quokka mums have no more than two offspring a year

Quokka mothers will have no more than two babies a year – though one is more common. They reach maturity at about one and a half to two years of age, and the average lifespan is 10 years. They survive longer in captivity.

We know, it’s impossible to imagine these little angels annoying anyone – but there’s so many on Rottnest Island, they’ve been known to wander into restaurants and shops and have to be shooed away! Cheeky buggers!

And nope, you should definitely not give into those puppy dog eyes and give beer to a quokka!

they are most active at night

Quokkas are nocturnal and spend most of the day sleeping and resting, but are also active during the day – as you can tell from the amount of quokka selfies you see on your social media feeds!

We know how tempting it is to reach out and pet the cute, friendly critters, but touching the quokkas is strictly prohibited as it could make you both sick. You can be fined $150 on the spot for doing so – so look, love, but don’t touch!

Though quokkas are generally gentle and sweet, remember they’re still a wild animal – they have sharp claws and teeth they will use against you if they feel threatened! Keep a safe distance and remember…no touching!

They're happy to see you…but mainly for food

These guys are clever – they’ve worked out how much people love them so now hang around hotels, campsites and more in the hope of charming humans into giving them food! But remember, you’re not to feed a quokka under any circumstances – fines of $150 and further penalties apply.

Humans make great entertainment for these guys – they have been known to follow you around if they take a liking to you!

They may not actually be smiling, but...

Though they’re known as the happiest animal on earth, their “smiles” are mainly due to the shape of their mouths, and they open them and stick their tongues out to keep cool! But, given their friendly nature, it’s more than fair to convince ourselves they are in fact smiling at us.

Their scientific name is setonix brachyurus

And the name “quokka” comes from the name given to them by the Aboriginal people living in south-west Western Australia. Whip it out at your next trivia night!

We're not sure who we're most jealous of!

Want a quokka selfie? Get a selfie stick

We know it’s a faux pas of travelling, but if you want the perfect quokka selfie, it’s best to invest in a selfie stick to maintain a respectful distance from the quokkas – and it will make your photo better!

Not exactly a "fun" fact, but it’s important to know when visiting the quokkas that they are a vulnerable species. This is why you must not touch, feed them or interfere with them in any way – we want to ensure these adorable guys prosper for decades to come!

You can find out more about quokkas and how to protect them on the Rottnest Island website.

You can help quokkas...by eating them

Not real quokkas, of course! But the Margaret River Chocolate Co sells Chokka the Quokka - a very tasty-looking chocolate quokka. Profits help raise funds for conservation and research projects, so you can eat chocolate and save the real quokkas. Win, win!

READY TO MEET THE QUOKKAS?

Of course you are!

Book your stay at Fremantle Prison YHA and reception will help you organise your ferry to Rottnest Island. You can explore by bike or on foot - whatever you choose, you're guaranteed an unforgettable day of secret beaches, breathtaking walks and of course, quokkas galore!

Once you've got the perfect #quokkaselfie, don't forget to hashtag #YHAOZ so we can repost your photo, and be extremely jealous of you. 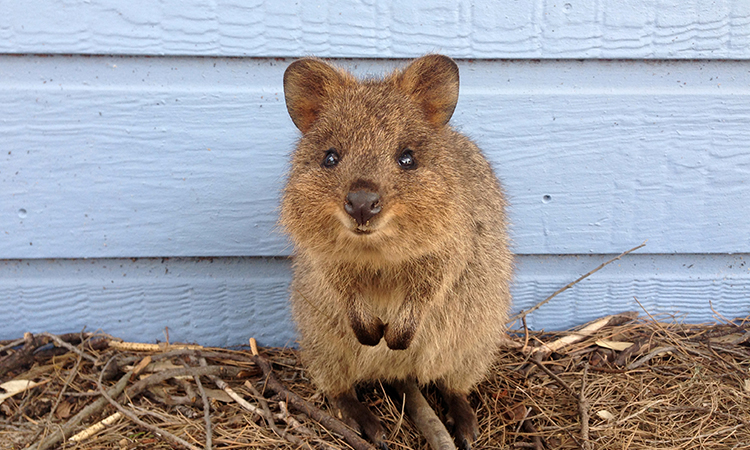 Join our YHA NRL and AFL footy tipping comp. Put your football expertise to the test and tip the most correct games each round and win free stays at YHA

Sign up to participate in our market research progamme. We will match the right people with the right research activities and provide rewards accordingly. You will only be contacted via the contact preferences you supply and interview times will be pre-arranged to suit when you are available. If you are selected you could receive up to 3 nights accommodation FREE.