Michael Clarkin finds there’s plenty to do for free in New York City.

New York may often be hailed as “the greatest city in the world” but having fun during the Big Apple’s summertime doesn’t have to cost a cent, as Michael Clarkin discovered.

As my taxi from JFK airport crossed the Queensboro Bridge on 59th Street, the vehicle was consumed by the iconic Manhattan skyline. My jaw literally hit the floor of the cab while I spotted the structures embedded in my consciousness from countless films and TV shows: there's the Chrysler Building; the Empire State and the Brooklyn Bridge.

This view was worth every penny of the $US45 it costs to get a taxi from JFK to Manhattan, but on a later trip I took advantage of the subway network to get into Manhattan for a fraction of the cost. You can also get the Long Island Railroad to Manhattan from JFK.

The cab dropped me off at the New York HI hostel which is in Manhattan’s Upper West Side - a pleasant stroll to Central Park and one block away from a subway line.

I was to soon discover that fun can come cheap in New York City, and as I was working in New York over the summer, I was able to take advantage of many of the free events the city hosts.

First tip - the subway is the cheapest and quickest way to travel around New York City and the cheapest way to utilise the subway network is with an unlimited “Metro Card”. If you’re having an extended stay in New York, the 30-day Card is definitely the way to go, and better still, if you pay with a credit card the pass is covered by insurance if lost or stolen.

You can plan your subway trip with the New York MTA’s site tripplanner.mta.info which will soon have you working the subways like a local.

While staying at the HI New York City you can take full advantage of all of the free summer events held in Central Park. The park is a hive of activity throughout summer with highlights including two freebies: the SummerStage concerts and the New York Public Theatre’s annual summer productions.

The City Parks Foundation presents the SummerStage concerts, with 30 free performances in Central Park ranging from music, dance, film, word and comedy. This year’s events started at the end of June and run through to mid August.

I was fortunate enough to see Angelique Kidjo, Zap Mamma and Australia’s own The Cat Empire rock the stage for what was a truly memorable afternoon in the sun. These free gigs are immensely popular and you should arrive at the gates ahead of the opening time to avoid the ‘lockout’. 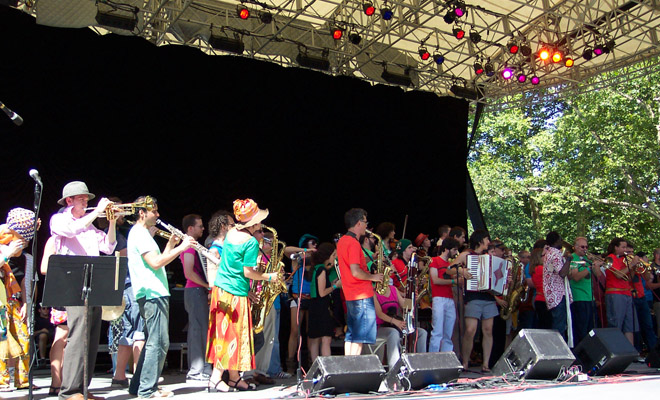 Presented by the Public Theatre of New York, “Shakespeare in the Park” productions are a uniquely New York twilight experience, sure to appeal to theatre lovers and the tight-arsed alike. Where else would you be able to see actors the calibre of Oscar winners Morgan Freeman, Meryl Streep, Denzel Washington, Christopher Walken, Kevin Kline and Philip Seymour Hoffman and stars like Natalie Portman gracing the stage of the Delacorte Theatre and performing the bard’s plays for free?

You must arrive early in the morning (around 7am) to line up for tickets to ensure you’ll get seats for that night’s performance. But rumour has it if you arrive at the theatre just before the performance starts you might be able to squeeze in.

Productions are held from Tuesdays to Sunday. But you can head to Central Park anytime of the week to enjoy the summer’s sun. Many locals can be seen tearing up the Jackie Onasis running track or lying on a beach-towel in their bikinis and board-shorts, working on that summer tan. It is New York after all.

You can also spot the occasional celebrity in the Park. While walking through the Park with a friend we crossed paths with a power-walking Natalie Portman.

Finally, when you head to Central Park you can see the Central Park West building that was the primary setting for “Ghostbusters”. Again, this won’t cost you a cent.

“Pool Parties” is somewhat of a misnomer as these concerts take place in the dried-out McCarren Park Pool in fashionable Greenpoint, Brooklyn. But what you will find is a great range of diverse acts. McCarren Park is a stone’s throw from Manhattan. You can get there by taking the L Subway two stops into Brooklyn.

The venue also doubles for paying gigs, and I saw Sonic Youth playing the entire “Daydream Nation” album and Built to Spill supported by Cat Power. The Beastie Boys and the Chemical Brothers also had gigs at McCarren Park last year.

Even if you’re not typically a lover of art galleries, the Museum of Modern Art, (affectionately known as MOMA) is definitely worth a visit, especially on Fridays when admission is free after 4pm.

The Museum’s collection boasts some of the world’s most indelible works, including Van Gogh’s “Starry Night” as well as a broad collection of works by the likes of Picasso, Claude Monet and Jackson Pollock. 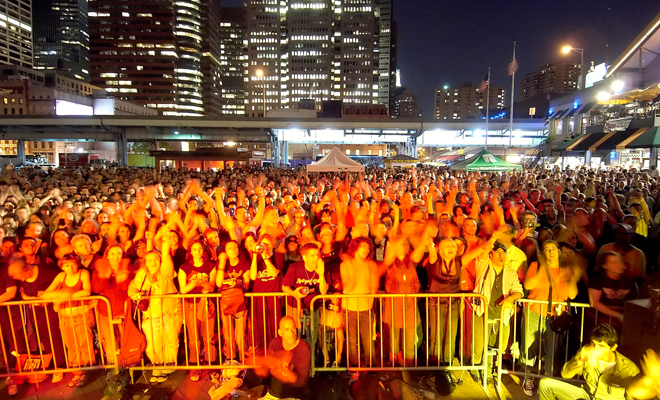 The RiverToRiver Festival will be held at various locations in downtown Manhattan from June through to September. It will include a 4th July extravaganza in Battery Park.

The New York 4th of July celebrations culminate in a fireworks display on the East River. I was able to schmooze my way into a rooftop party in Brooklyn and enjoyed a great vantage point for this impressive display.

The Staten Island Ferry offers some of the best views of the Manhattan Skyline as well as providing a great vantage point for the Statue of Liberty.

The ferry departs Manhattan Terminal every half-hour and I boarded at dusk and enjoyed seeing the Green Lady backed by a sunset. 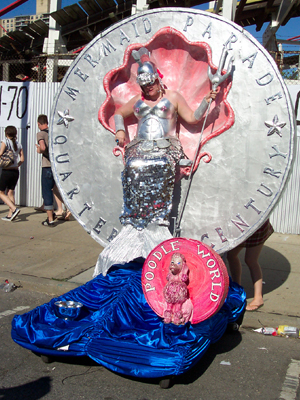 New Yorkers celebrate the start of summer vacation with the annual “Mermaid Parade”, a marine-themed procession through the streets of Coney Island. Think of the Carnivale in Rio with less rhythm but with generous portions of colourful tackiness, enthusiasm and Burlesque raunchiness.

The paraders dress as Vikings, Pirates, lifeguards, crustaceans, fish and of course, Mermaids who ham it up in front of a crowd of thousands who gather on the third Saturday of June each year.

The Parade lasts a couple of hours and concludes when the Parade King and Queen make their way to the beach and “bless the waters”. Past kings and queens have included David Byrne, Moby and Queen Latifah.

The Mermaid Parade costs nothing and you can get a subway to Coney Island from Manhattan that will take you to within a stone’s throw of the action. However, while the Parade is free, a rave follows in the evening with admission costing a few greenbacks.

You can also take advantage of the location and pack your bathers and take a dip or maybe cough up a few bucks and take a ride on the 80 year-old Cyclone rollercoaster - this ‘wooden rattler’ is a Coney Island landmark.

So if you’re heading to New York in the summertime, you won’t be short of things to do. I haven’t even talked about a visit to Times Square (also a short distance from the New York HI). And if you’re on a budget then you might be doing what I did and eating a lot of the famous New York pizza slices which will cost you between $2-3 per generous wedge.

Also, as it’s usually extremely hot and humid you should pack some wet weather clothes as New York typically has a summer thunderstorm just about every week.

If you have half as much fun as I had you’ll agree that New York truly is one of the greatest cities in the world, if not the greatest. 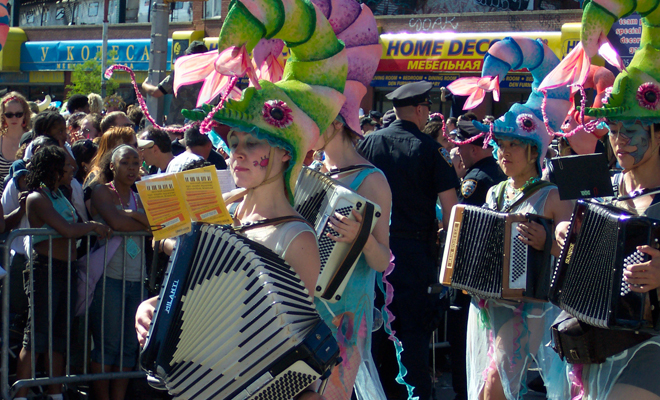