Call Of The Mild

No-thrills Queenstown didn’t get David Whitely’s heart racing – and he was okay with that.

From the centre of Queenstown, the Tiki Trail is an hour-long uphill slog through the woodland. It would, of course, be a lot easier to take the gondola up. But that feels a bit like cheating.

Coming down the other way are mountain bikers, nimbly leaping the jumps on tracks that range from toe-in-the-water to frankly terrifying. They don’t stop to admire the wheezing hikers coming up the other way.

At the top of the hill, there is the luge. To the uninitiated, it’s essentially a very basic go-kart which can be steered down a hill along one of two twisting, turning tracks. The simpler, less speedy track is for first timers – but once you’ve shown you can handle that it’s all about taking racing lines, hurtling over steep dips and accelerating through corners.

In a city best known for hair-raising skydives and bungy jumps, the luge is a slice of hugely entertaining fun that doesn’t ramp the fear factor up too high. 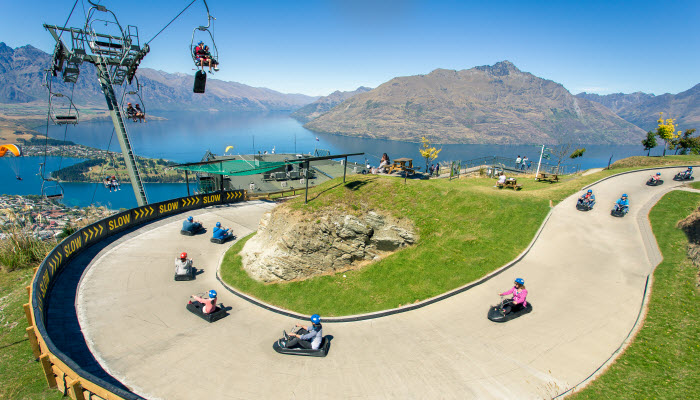 Queenstown built its reputation on the ski fields and high octane thrills, but these can overshadow an extraordinary setting and a wealth of activity options that are far less petrifying.

It’s easy to overlook Lake Wakatipu, the cartoon thunderbolt-shaped glacial lake that Queenstown sits on the edge of. The mountains rise up from it on all sides, and a walk or cycle along its shore in any direction is generally time well spent.

But heading out onto the lake in a boat allows a different perspective, with the town dwarfed by the Remarkables range. 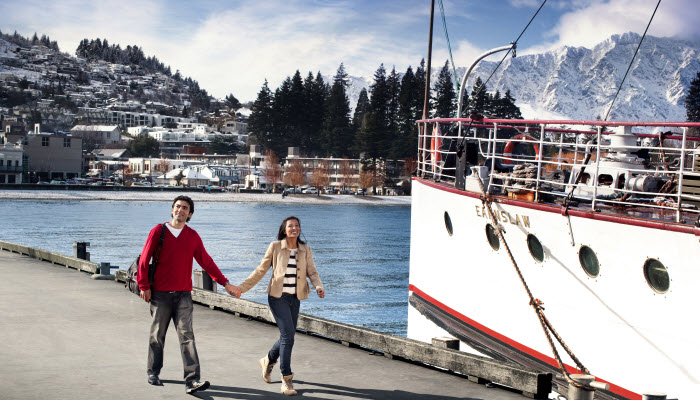 Boats don’t get too much more storied than the TSS Earnslaw, which has been connecting settlements on the fringes of the lake since 1912. It is now used purely for tourism purposes, but is still powered the old way. Down below, unlucky crew members still put their backs into it, shovelling coal to power the steamship.

The cruise across the lake docks in the shadow of Walter Peak, a 1,800m imposing rock wall named after the son of Queenstown’s first European settler, William Rees. In its heyday, the Walter Peak Station had 170,000 acres, 40,000 sheep and 50 full time staff. Since then it has been subdivided, and the farming comes a distant second to entertaining tourists. That means sheep shearing shows, hand-feeding animals and masterful performances from the sheepdogs – as well as a few tall stories.

The stories these parts are most associated with, however, come courtesy of JRR Tolkien and Peter Jackson. Nomad Safaris runs a “Safari of the Scenes” trip to some of the key filming locations from Lord of the Rings and The Hobbit, heading north along the lake to Glenorchy and the Dart River Valley.

This may sound utterly tedious to any orc-phobic fantasy fiction haters, but you don’t need to have seen the films to appreciate the scenery. While the guide is pointing out Dimrill Dale, where the Fellowship escapes Moria, there are still fabulous mountains to look at. Similarly, when talking about the spot where Boromir dies, you’re surrounded by glorious, lush forest.

The little tidbits of insider filming info help bring places to life, too. For example, while in the Dart River Valley, Mt Earnslaw is pointed out. Sean Bean (who played Boromir) has a fear of helicopters, so refused to get in one to film his scenes on the side of the mountain. So every day he had to hike up for hours in full costume.

That makes tackling the Tiki Trail in shorts and a T-shirt feel somewhat tame. But taking the time to explore Queenstown and its surrounds rather than plummeting through at breakneck speed shows a different side. And it’s that natural beauty that drew the thrill-seekers in the first place.

If you don’t want to haul up the hill on your own steam, Skyline Queenstown’s gondola and luge package costs NZ$47 for two rides up to NZ$59 for seven.

YHA members get a 10% discount on the TSS Earnslaw Cruises with Real Journeys, which otherwise costs NZ$57.

At a latitude of 45 degrees south, you may be forgiven for thinking that all Queenstown is fit for growing is icicles. But the Central Otago region that surrounds the South Island’s resort town is not-so-quietly gaining a reputation as one of the world’s best niche wine regions. The odd individual winery in obscure parts of Chile or Argentina may like to argue the toss, but by all realistic measures, Central Otago is the world’s most southerly wine region. The climate means that if you’re looking for a big, beefy shiraz, you can go to a bottle shop and buy one from somewhere else. That sort of grape just isn’t going to survive in these conditions.

But some grapes can – and combined with expert winemakers and up-to-date technology – they are being turned into some world class wines. The key player here is pinot noir, which accounts for nearly 80% of production. The climate and soils suit it perfectly and world wine experts acknowledge the Central Otago pinots as being amongst the best on the planet.

For travellers who prefer the mellow glow to adrenalin shots, taking a few hours out sampling the wares of Central Otago’s wineries is rather idyllic. Queenstown Wine Trail offers YHA members a NZ$5 discount on its NZ$160 or NZ$182 half-day tasting tours. Rafting down the Shotover River is something of a high stakes dance. The slows of the slow-slow-quick-quick-slow are beautifully relaxing. The chance to take in the high canyon walls, remarkable rock layers and miner’s huts dating back to the 19th century gold rush is blissful.

But it’s also the calm before the storm. While the two-hour journey starts off with gentle practice rapids, the intensity increases as you blunder downstream. The Mother section soon approaches. The origin of the name – is it because it gives birth to the rest of the river? What you call for as you’re going over? A polite abbreviation of a crude-but-accurate description? – is left unexplained.

It’s a ride and a half battling through. There’s the vague pretense of steering through the hairy bits, but it’s really a case of hanging on and hoping for the best as the river attacks the raft like a rogue pitbull in a playground.

The big beast is yet to come. A waterfall at the end of a flooded miner’s tunnel makes the raft lurch all over the place as it floats down, bouncing off rocks and tipping precariously. But the passengers make it intact – and the drift back to base is completed with huge grins and clanging paddles of congratulation.

WHERE TO STAY BOX