There Are 8351 Kilometres Of Canadian Adventures On The Train Tracks From Vancouver To Halifax. By Mike Laanela

Four days, 18 hours and 35 minutes – that’s the time it takes to cross Canada by train. From Vancouver to Halifax, Mike Laanela rode the rails 8,351 kilometres to discover for himself what lies in between.

It is a typical wet Vancouver day when I arrive at the train station. The rain makes it easier to be leaving. I check my bike and spare bag into cargo, and hurry past the ticket wicket toward the train waiting at the platform. I am heading across Canada for a job in Halifax, a coast-to-coast journey that will take almost five days on the rails.

As the conductor checks my ticket and directs me to car 218, I realize that this is not just a trip. It is one of the great rail journeys left in this age of airplanes and freeways. For me it will be an exploration. Over the years, I have seen dozens of other peoples’ countries pass by outside bus and train windows, all in the name of exploration. When I moved back to Vancouver from Sydney after several years overseas, I was acutely aware that I did not know the country I grew up in. So, when a job offer came up in Halifax on the opposite side of the country, I decided to see the whole country in one big gulp by train.

For the next 8,351 kilometres Canada will roll by outside my window. My roomette is a tidy cube – a sink, toilet, and lounge seat all disappears when the Murphy bed folds down. For now it is the familiar suburbs of Vancouver, which roll by our long silver railcars. The conductor’s call announces the first seating for dinner. When I step into the dining car Moun, the French maitre d’ beckons me to a table underneath the art deco lamps and seats me by the window. Across the table two elderly Americans and a young Australian introduce themselves to me. As the train rolls out of Vancouver, in the way travellers thrown together for a journey do, we string together something of a conversation.

The waiters serve the three-course dinner as we rattle up along the banks of the mighty Fraser River leaving the Pacific Ocean behind. After dinner I decided to explore the train. A couple of cars ahead I discover the ‘activity’ car. Silver heads are hunched intently over bingo cards. I check the schedule on the wall - next up is ‘name-that-tune’. I can hardly see the point of starring at bingo cards or videos while so much of this country is passing by outside the window.

A further twenty cars ahead I finally reach coach class where people are bedding down in their seats for the night. Meals are not included here and grocery bags lie amongst the packs and suitcases scattered in the spare spaces. Under the dome car’s lookout, a small kitchen serves sandwiches, burgers and fries. Although the seats in economy looked big, I am pretty thankful to have a sleeper. I once rode North America north to south on a bus seat. I have no intention of sleeping in a seat on another transcontinental journey.

Night comes early in between the snow-capped peaks of the Coastal Mountains range. In my tiny roomette I pull down the Murphy bed and stretch out beside the window. I feel like a gold fish in a bowl as we roll through small towns. The bells clang in the night as pickup trucks idle behind crossing guards, the driver’s blank faces suddenly lit up by the carriage lights. I try to stay away watching, almost drinking in the darkening landscape, but eventually the clickitty-clack of the wheels rocks me off to sleep. 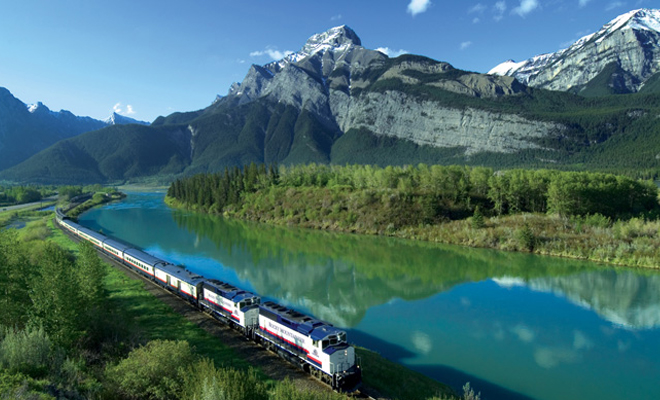 The next morning I awake early, and lie for an hour watching the Rocky Mountains rolling past my window. I know it is one of those moments in the journey that I will remember long after it has ended.

At the rear of the train in the lounge car is a row of clocks – one for each of Canada’s five and half time zones. Overnight we dropped an hour and I adjust my watch then spend the morning up in the dome lookout. Mt. Robson, Canada’s highest peak is shrouded in clouds as we pass. Then just before lunch we crest the Continental Divide, the geographical line that splits North America, east from west. From here on every drop of rain, just like the train on these rails, will eventually flow eastward to the Atlantic Ocean.

In Jasper National Park, everyone gets off to take photos. The mountain village is the sort of postcard perfect Rocky Mountain town everyone expects to find in Canada. I am a tourist in my own country, a feeling I have not felt in years. Over lunch in the dining car, the sky clears and the mountain peaks finally emerge, thrust up by unfathomable forces that leave us speechless. We spend the rest of the day descending onto the flat Prairies. Just as dinner is served we roll into Edmonton’s bland station - an anti-climactic end to such a geographically dramatic morning.

Once again overnight we cross into another time zone, and I am nearly late for breakfast. Perhaps these zones are a plot to keep me from my eggs, I muse, as I hurry to my seat. Moun seats me with three older French-Canadian sisters heading back to Montreal. They hate to fly and are veterans of this journey. They tell me I have slept entirely though Saskatchewan, a province roughly the size of Western Australia. Despite their reassurances that I missed nothing but a few hundred kilometres of farms and fences in the darkness, I feel cheated by the revelation.

The equally flat province of Manitoba rolls by instead, all lakes and farms and scattered homesteads. As a tribute to my francophone companions, I order French toast with Quebec maple syrup. This makes them all laugh. At the Winnipeg stopover, police with dogs come aboard and cart off a tattooed man and his very young girlfriend. Whispers speculate that he was drug smuggling.

In the afternoon the farms give way to forests and yet more lakes. In the northern Ontario town of Sioux Lookout we stop to refuel. It is a lumber town with one honky-tonk bar, a liquor store, a few greasy spoons, and a large native population. The train station is dilapidated and boarded up. A sign on the door says “Come back and see us when the renovations are done” quite hopefully. In many ways it reminds me of outback Australia, (with a lot of extra trees and water). The same problems of isolation, and cultural disruption trouble the remote communities here, despite Canada’s overseas reputation as a leader of aboriginal rights.

Since I missed Saskatchewan, I have taken to sleeping with the blind open. The rising moon through the treetops awakens me and I lie watching the flashes of moonlight on passing lakes and beaver ponds. When morning comes, another hour has mysteriously disappeared and I rush to get to breakfast. Then I spend the rest of the day rugged up in my doona on my bed. By late afternoon the forest and lakes gives way to cottage country, then farmland. By late evening we are rolling through the outskirts of Canada’s largest city. 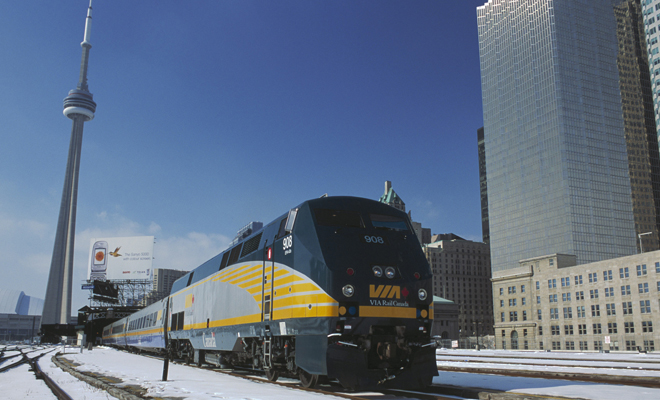 It’s black and dumping rain when I get off at Toronto’s impressive Union Station. It’s a sprawling city of red brick houses and glass towers, a bit like Melbourne but not as pretty. I stay three days and then re-board a commuter train to Montreal to resume my journey.

We roll up the quiet shoreline of Lake Ontario, one of the five Great Lakes that make North America’s inland sea. It is part of the world’s longest unguarded border. Across the water lies the United States. But Canadians have been openly critical of their southern neighbours since 9/11. Rightly or not, we believe we have more social conscience. These calm waters hide the real tension between the two nations.

The station in Montreal is the first that is truly busy. Unlike the West, in the East the train is still used by locals. I struggle in French to order dinner in the station before I board another sleeper for the final leg to Halifax. We quickly roll out of the city and cross the massive St. Lawrence River that empties the five Great Lakes into the Atlantic Ocean.

That night we pass into New Brunswick, marking our arrival in the Maritimes, Canada’s east coast provinces. The land is still forested and dotted with farms. Always in the distance is the wide St Lawrence, now a seaway. English and French ring out in greetings at the stations. We are in Acadia, Canada’s other French speaking community. The Acadians were Canada’s first settlers and still live in small towns all over the Maritime provinces.
Onboard the four-star service has been replaced with a more down to earth bonhomie – a French term that describes the casual camaraderie between the crew and passenger on this milk-run. Throughout the day the train stops at little country towns with sharp spires of Catholic churches. Families in pickup trucks wait at the stations. Glowing white statues of Christ stand watching over graveyards where tens of generations rest.

In the afternoon we cross into Nova Scotia and I can nearly smell the salt in the air. The trees on the edges of the lakes are windswept, a sign that we are nearing the ocean. Late in the afternoon we circle the harbour coming into Halifax, Canada’s largest city on the Atlantic Ocean. Now with the sea in sight I know my journey is at its end.

As I step down onto the platform, I feel lucky to have had this window onto an entire nation for five days. There were a lot more beaver ponds and lakes than I could have imagined. But the journey by train gave me a chance to contemplate, not only the vast size, but also the subtle changes in the people and landscape that together make a nation. I had been a traveller in my own country. It was not just a trip, it was journey and an exploration. 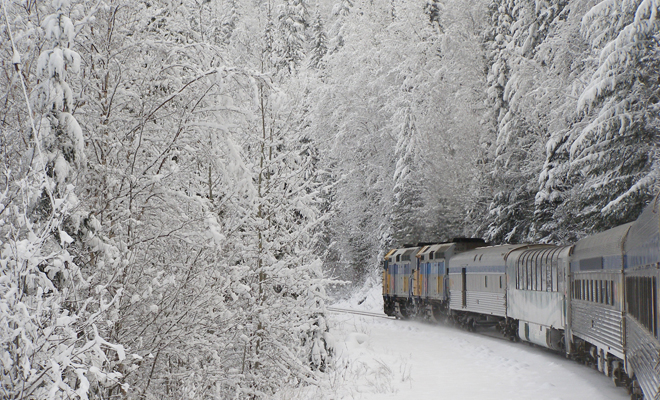