New Zealand’s South Island moves at a different pace from the north. Divided by the formidable Southern Alps, the sheer extremes of the land inspire adventure, as Mike Laanela recently discovered.

It’s a clear early morning when I find myself waving goodbye the North Island from the back deck of a southward bound InterIslander ferry. As we cut out into the open water of the notoriously rough Cook Strait, the wind turns cold and soon jumpers and long pants start appearing from bags and backpacks on the crowded deck. Already the change from north to south has begun.

As New Zealanders will quickly let you know, the larger South Island is more than just geographically apart from the north. With its smaller scattered population, snowy winters, and mountainous landscape, the South Island seems to ooze an independent and adventurous spirit. Only a long day’s drive in length, (a patch of land that wouldn’t much exceed a couple outback stations), it has an entire continent’s worth of geography, all clenched together like a tightened fist.

All morning on the sundeck I watched the clouds over the South Island cliffs growing steadily closer, but when we finally enter the narrow mouth of the Tory Channel, I’m caught in the coffee shop below deck with the locals who find it all too familiar. By the time I scramble up on deck we’re already negotiating the narrow channel. The massive ferry seems out of place next to the farmhouses and cribs (summer houses) that speckle the sides of the hills. Already the South Island feels more open than the North.

At the ferry terminal in Picton, I board the train for my first stop on this mighty little island, Kaikoura, a former fishing and whaling town on the dry east coast. In the past ten years it has reshaped itself into one of the nicest little tourist traps on the circuit, but not without good reason. As I stroll the extremely stroll-able main street, it’s easy to see that a globally recognisable tourist kitsch has already taken over – large murals of sea creatures and bright ‘olde shoppe’ type signs, have replaced the dull attire of a true fishing village. But it is also obvious that there is an inspirational energy lurking behind the tarted up weatherboard shop-fronts.

From the backdrop of corrugated mountains, onto the pale blue ocean out front, it’s just five minutes to the edge of the Continental Shelf where the sea bottom drops a thousand meters into the depths of the Hikurangi Trench. In this underwater canyon the world’s largest toothed predators, sperm whales, hunt giant squid in the blackness by sonar clicks. Years ago whaling was common on this coast, but like the sealing and the gold rush it died out and was almost forgotten. However for the last ten years, humans have again chased sperm whales from Kaikoura. 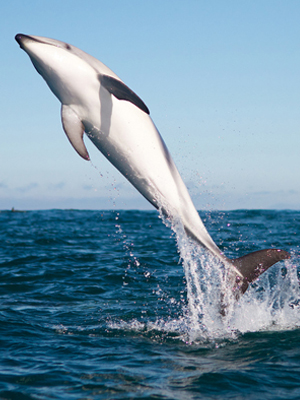 t’s 7 am on a clear morning when I finally get my turn. With the water glassy calm and the brown slopes of the mountains emerging from the lifting clouds, it’s just beautiful to be out on the water. The captain turns off the engine of the twin-hulled boat just five minutes out of the harbour. He then lowers a microphone into the water to listen for sonar activity. Since sperm whales dive for up to an hour tracking them is a detective style search.
Several times the Captain motors off in one direction only to take another listen and then turn us back around. Finally we catch sight of the mammoth creature resting almost motionless on the surface, over 14 m in length. For ten minutes it sits barely moving and then with a grand flick of its tail, it heaves up and disappears into the depths.

Sperm whales are not the only creatures that thrive in the nutrient rich waters around Kaikoura. Over three days I manage to kayak with Fur Seals, cage dive with Blue and Mako sharks, and then snorkel with five hundred Dusky Dolphins (yes, five hundred) who just can’t seem to stop playing. The whole town seems mad for marine life and tales of heart stopping encounters are eagerly swapped over late dinners in front of the panoramic windows of the hostel dining room.

From Kaikoura, by car with some others from the hostel, I continue on to Christchurch, one of New Zealand’s older cities, still pickled in English character. Unfortunately I don’t have much time for punting on the Avon in the garden city, and after a quick night in town, I catch the Trans Alpine train that will take me through spectacular scenery, across the mountains the following morning. The long dry summer has cleared all the snow from the peaks. There’s a quick stop in Arthur's Pass and as the sun crosses over the mountains so do we, and by mid afternoon we are rolling down to the West Coast. 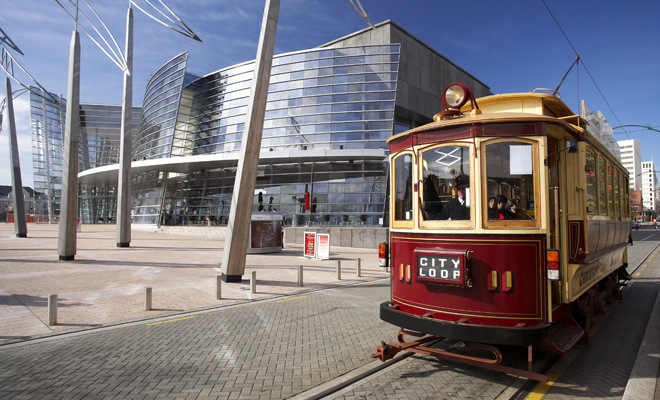 I overnight at a grand old timber mansion in Greymouth, the local YHA and join the Magic Bus, a backpacker’s bus, to sample yet another mode of travel down the west coast. I’ve always been a bit dubious about packaged travel, but this alternative bus service seems a worthy compromise. It’s a friendly way to see more than a straight shot through on an Intercity bus could allow. Stopping en route at a greenstone (jade) cutting factory in Hokitika, to pan gold in the old mining town of Ross and finally at a dusky country pub, with baseball caps and g-strings hanging from the rafters, we fill up on scones with jam and cream, straight from the kitchen.

By afternoon we are winding our way up the highway 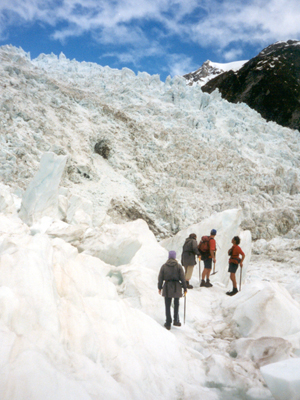 to the small tourist town of Franz Josef, to join a guided walk on the famous glacier. One of the outstanding qualities of the south island is the accessibility of the country’s wilder areas and Franz Josef is a perfect example of this. Because of the proximity of the highest of the Alps to the nearby ocean, the huge snowfalls on the peaks create the Fox and Franz Josef Glaciers, literally two huge rivers of ice. Moving at a metre a day, they tumble down, over twelve kilometres from the mountaintops into the forested valleys below.

So up we climb, with crampons on our boots like a big steel spiked caterpillar, up ice steps, past tiny blue rivulets of glacial water, and down aluminium ladders into a tunnel crevasse. It’s a strange landscape of grey rock dust and ice, almost like a dragon sleeping beneath our feet. I don’t regret taking the full-day walk to the deeply crevassed upper slopes.

The next morning another early bus carries me back over the Alps into Queenstown, New Zealand’s undisputed mountain capital of all things extreme. From it’s postcard perfect location, on the edge of a large lake surrounded by jagged mountains, over the years Queenstown has earned itself a massive reputation amongst travellers as a ‘must do’ destination on the check list of the well and truly experienced. With a relaxing young vibe and slew of busy cafes scattered along the waterfront and pedestrian malls, it’s the sort of place where you naturally want to linger.

Billboards advertising every type of adventure excursion assault your senses as you stroll down the street.  In the shops, wealthy overseas package tourists hunt for Greenstone pennants while bushwalkers on their way to or from the island’s many famous mountain tracks, such as the Milford, Greenstone or Kepler, reprovision in the grocery stores. For half a day I try to rest from the breakneck pace of my trip but in the end I can’t sit still. One trip to the booking desk and I’m soon signed up for the normal routine of any adrenaline junkie in paradise. 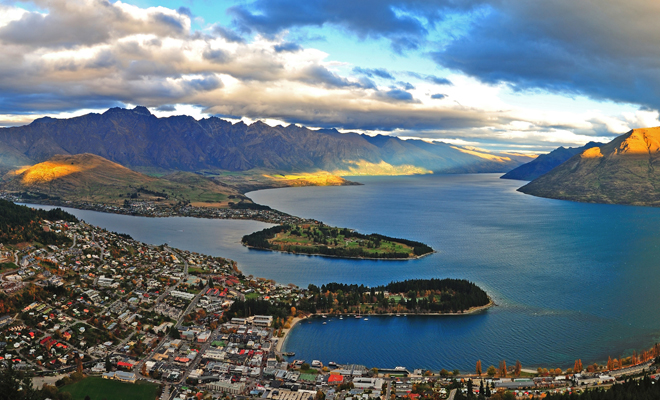 My introduction to Queenstown’s own home grown brand of extremism begins with a yank, on the town’s true classic – the bungy jump. Instead of jumping from a little bridge though, this jump is from a cable car hanging 137 m far above the Nevis Canyon. Against my basic instincts I shuffle to the edge, and throw myself headlong into the open air. Was it worth it?  I can only say those seven second of unrestricted freefall acceleration will be hard to forget.

Following that, I try river rafting, but it’s a bit tame due to low rainfall. For jet boating on the Shotover River though, water levels don’t seem to matter. Our driver, Buzz, I think his name was, looks like he was raised in a wind tunnel. With the practiced non-chalance of a Formula One driver he skids us along within kissing distance of the granite canyon walls. A thirty minute rush though the narrow canyons in the ultra manoeuvrable custom jet boats quickly raises the hair on the back of my neck.

For my last day in town I pick a wild card, an unknown and try river surfing, a mad sort of sport that only the most masochistic of thrill-seekers would consider. While everything else I had done in Queenstown, (which included a Maori Haka the night before) had been relatively passive, now I find myself kicking down river in a wetsuit with a boogie board. The same river on which I floated in a raft yesterday! We learn rolls and squirts and finally have a hard session catching river waves. Then at a viewpoint just before the last rapid our guide pulls us out, points to the clearly extreme-grade fury below and says with smile, “This could kill you. Who wants to come?” You gotta love that South Island sense of adventure I think to myself before plunging in for a spin cycle ride that would put Fisher & Paykel to shame.

From Queenstown I cross the spectacular Alps one last time to the Fiords of Milford Sound, a mossy land where rain falls two out of three days throughout the year. I board the Wanderer for an overnight cruise, a hulking steel motor-sailer, full of other backpackers, attracted by the relatively cheap overnight price. With a chummy crew of six slogging hard in the galley to put on dinner, the big boat is a cosy place to be while a storm sets in for the duration of the journey outside. During breaks in the weather we duck outside to watch the curtain of waterfalls that seems to stretch for miles along the steep side of the Fiord. 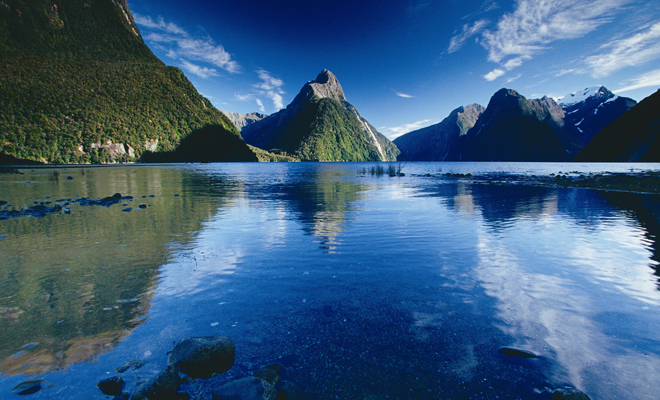 As I lie in my bunk that night after a hearty dinner onboard, washed down with some beer and stories from other travellers, I think back to the start of my trip on the InterIslander ferry, crossing the Cook Strait. What this compact island has shown me in those ten days in between is almost too wide ranging to believe. The choices available to travellers here are enough to fill months or even years.  I guess it’s part of South Island spirit that how much fun you have is just a question of how long you have and how hard you’re willing to try.