You won’t see much mulled wine but you’ll find plenty of cold beer, turkey and mince pies make way for prawns and mangoes, and Santa Claus gets awful sweaty under that thick red suit – welcome to Christmas, Aussie-style. 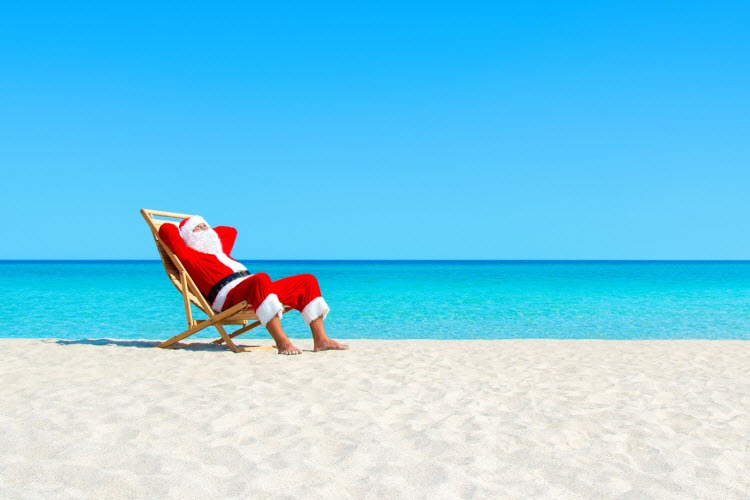 Go to the beach

The best thing about Christmas in Australia? Swapping the snow for the sand. Christmas in the Southern Hemisphere falls right in the middle of summer, which is why so many backpackers make a beeline to the beach on December 25. If your family’s shivering through a white Christmas back home, make sure you remember to Skype them from sunny Bondi!

All this sunshine also means it’s cricket season, and you’ll notice games in every park and on every beach over Christmastime. The Boxing Day Test match – which fills the Melbourne Cricket Ground every year on December 26 – is another Australian tradition that local sports fans probably enjoy even more than the festivities the day before.

Put another shrimp on the barbie

Well, we call shrimp ‘prawns’ in Australia, but you get the message. It’s too hot for a glazed ham or roast turkey out of the oven, so Aussies prefer seafood for their Chrissy dinner – especially fresh prawns. In fact, of the 15,000 tonnes of prawns Australians eat every year, 6000 (40%) are consumed during the Christmas season. Unfortunately, a supply shortage means prices will hit a 30-year high this December… not great for a backpacker’s budget!

Australians and New Zealanders love to argue about which country invented this famous dessert, but deep down the Kiwis know that the ‘Pav’ is as fair dinkum Aussie as meat pies and kangaroos. Named after a Russian ballerina and made of meringue, whipped cream and fruit, the Pavlova is an Australian Christmas favourite that’s gobbled up at Chrissy lunches across the country.

Ho-ho-ho into cherries and mangoes

It wouldn’t be Christmas in Australia without a bowl of cold cherries to nibble on and a tray of mouth-watering mangoes added to cocktails, seafood, salads and desserts. Sweet tooths should also pick up a couple of packets of Jaffas and Spearmint Leaves lollies to mix together for a confectionary version of Christmas holly.

A post shared by Sunnybank Hills Shoppingtown (@sbhshoppingtown) on Nov 23, 2016 at 8:01pm PST

Let’s be honest, both Australians and backpackers don’t need too much encouragement to have a sip – but Christmas is a good excuse anyway. And in the sweltering Australian summer, eggnog and mulled wine is replaced by icy cold beers and chilled bubbly, or maybe even a mango daiquiri if you’re feeling really fancy.

Australians sing the same sort of Christmas songs you hear in other English-speaking parts of the world, but the warm weather means we do our carolling outdoors. Every town and city across the country holds their own alfresco carols events, and the two biggest televised extravaganzas are found in Sydney – Carols in the Domain, this year on Sunday 17 December – and Melbourne – Carols by Candlelight, which is a Christmas Eve tradition.

A post shared by Carols by Candlelight (@carolsbycandlelight_aus) on Oct 4, 2017 at 2:08am PDT

Check out the Christmas windows

If you’re travelling through Sydney, Melbourne or Brisbane during December, you’ll notice big crowds of kids pressing their noses against shop windows in the inner-city. They’re not just drooling over the presents they’ve asked Santa for – they’re admiring the elaborate window displays at David Jones in Sydney and Myer in Melbourne and Brisbane that crowds flock to every Christmas.