Centered on the North Island, the Thermal Explorer Highway is a 457 kilometre route anchored in Auckland and stretches throughout the land to Napier, giving visitors a taste of life on the edge of the Pacific Ring of Fire. Just be sure not to get burned.

You don’t have to stray far from the city to get a feel for New Zealand’s geothermal activities: the ground beneath Auckland’s feet is home to over 40 volcanic cones and explosion craters. The hills and craters were important places for pa-fortified Māori villages, with many of the craters used as large earthen forts.

The biggest volcanic force in the area is Rangitoto, a young and restless volcano at 600 years old. Despite jutting defiantly from the harbour, today it’s more of a picturesque hiking and picnic spot.

The upside of Auckland’s volcanic pedigree is that you can experience an active volcanic field in a budget-friendly way. One of those ways? Take a walk up Auckland’s highest volcano, the evergreen Mt Eden, for some of the best panoramic views over Auckland and Waitemata Harbour. 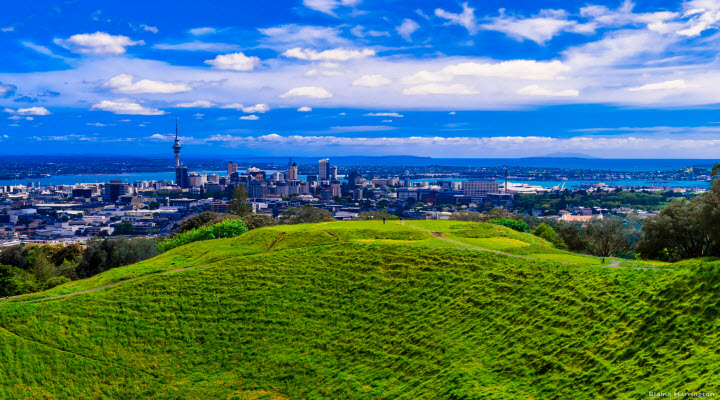 Take a side trip from the Thermal Explorer Highway for the worthwhile and mysterious White Island lurking in the Bay of Plenty about 50 kilometres offshore. The smoking volcanic crater and ethereal lunar landscape makes White Island the ultimate villain’s lair – although visit when the weather is favourable and you’ll find daytrippers taking a walk on the wild side.

Considered one of the world’s most accessible marine volcanoes, the bulk of the volcanic mountain rests below the surface with easy access for visitors. However, it’s also uneasy ground. There was a volcanic temper tantrum a century ago – and if that’s not intimidating enough, the intoxicating white smoke that bellows from the crater fumes at around 800 degrees.

Daytrippers come by both boat and helicopter from Whakatāne and you can plan your trip online. 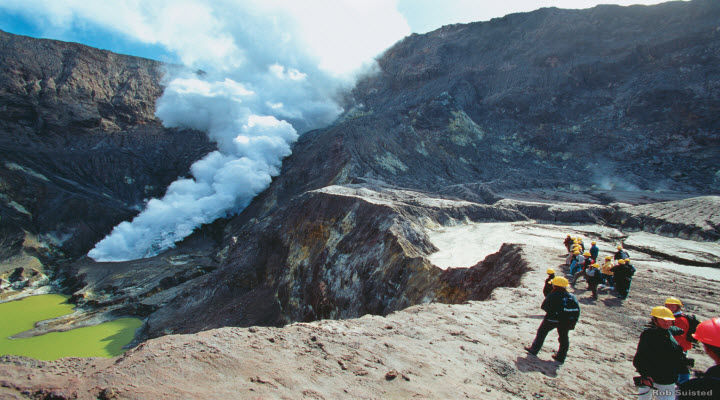 In many ways, Rotorua is the Kiwi version of Las Vegas: big, bubbling and built for tourists. However, its steamy tourist appeal has firm roots in geothermal wonder and stunning beauty.

Pack the camera to capture the sinter terraces and spouting geysers throughout the area, including Pohutu, the southern hemisphere’s largest active geyser which blasts up to 30 metres high around twenty times per day (proving patience is a virtue). Take a stroll along the bubbling mud pools on the Craters of the Moon geothermal walk, or visit the largest hot-water waterfall in the Southern Hemisphere at Tikitere, also known as Hell’s Gate, a sacred Māori site with over 20 hectares of hot pools, steaming lakes, cooking pools, bush walks and a mud volcano.

And if you’re keen to test the medicinal properties of a mud bath, this is the place to indulge your inner spa prince or princess, with high-end mud spas and a sulphur spa.

On the surface, Lake Taupō looks at peace with its surroundings. But beneath the surface of New Zealand’s largest lake lies the caldera of a dormant super volcano that caused epic destruction.

Today, Lake Taupō is the centre of an incredible network of geothermal parks and caves popular with families and locals. One of the highlights is Orakei Korako Geothermal Park and Cave, accessible by ferry and home to 23 active natural geysers, boiling hot springs, sinter terraces as well as the Ruatapu Cave.

Also known as the Sacred Hole, the cave descends 35 metres into a hot pool known as the Pool of Mirrors, the only geothermal cave known to exist in New Zealand, and one of two caves known in the world. You can’t get too close! Stop by the cave entrance and take a peek from the viewing platform.

Consisting of three huge volcanoes: Ruapehu, Ngauruhoe and Tongariro, the park has been a favourite with hikers and landscape lovers for a century.

However, Ruapehu’s starring role as Mount Doom in the Lord of the Rings film trilogy saw the park’s popularity boom. Ruapehu clocks in the biggest and most restless volcano, although Tongariro was the last to erupt in August 2012.

The constant volcanic activity in the park draws visitors in their thousands with the Tongariro crossing considered one of the best day-walks in New Zealand, the most popular trek with its fuming vents, thermal lakes and crater hikes (not to mention convenient pick-up/drop-off shuttle service from nearby National Park, Ohakune and Taupo).

While the Thermal Explorer highway ends on the coast in Syrah-inclined Napier, New Zealand’s hottest spots continue on the South Island. The South’s hottest? The alpine village of Hanmer Springs is known for its thermal pools warmed by the earth’s toasty core. The rainwater-to-hot-springs process takes 173 years, much to the delight of hot water relishers who flock to the alkaline waters rich in minerals in search for the ultimate in unwinding. 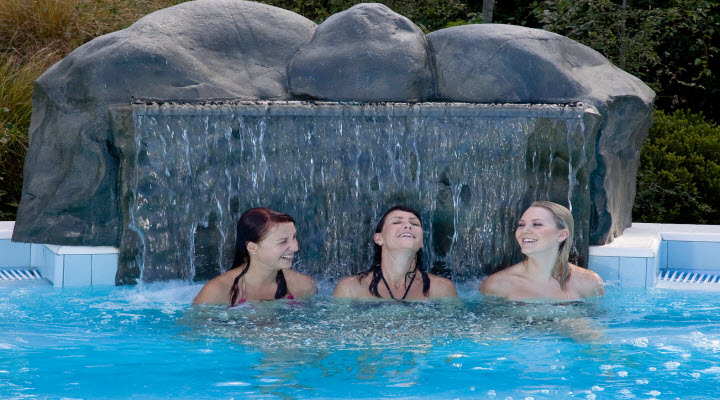 Tourists first flocked to Rotorua in the 1800s to visit New Zealand’s “eighth natural wonder of the world”, the Pink and White Terraces. A natural wonder, the geothermal creation was captured first by landscape painters and later, the first photographers.

Located just a few hundred metres apart, the Pink Terraces were known as Otukapuarangi, the fountain of the clouded sky, while the white terrace were called Te Tarata, the tattooed rock. Their popularity even extended to a visit by Prince Alfred, the Duke of Edinburgh who visited the area in 1870.

However, in 1886 Mount Tarawera erupted in the early morning and consumed the Pink and White Terraces in volcanic ash and sediment. The eighth wonder of the natural world was lost - until 2011 when researchers announced they had found sections of the terraces lying at the bottom of Lake Tarawera.

Sceptics have challenged the discovery but romantics can imagine what might have been on a visit to the buried village of Te Wairoa near Rotorua.

Similar to Pompeii, the 19th-century Māori villages were engulfed by ash during the same eruption and today have been excavated and opened to the public near the site of the original terraces.

While some of New Zealand’s geothermal spas burn your wallet as much as your bottom, there are a handful of natural hot springs that are completely free.

Head to Hot Water Beach on the Coromandel Peninsula at low tide, where two underground fissures – and a handy shop renting spades – allow you to dig your own warm spa in the sand (check the tides first).

Fancy a little waterfall with your hot spring? Half an hour south of Rotorua is Kerosene Creek, where hot water pulsing up underground mixes with the cold water from the creek.

There’s a similar experience just outside of Taupo at Otumuheke Stream in SpaPark, where geothermal activity warms the Waikato River.

For those who don’t feel like scrambling over rocks, at Mangatutu Hot Springs in Kaweka Forest Park the thermal waters are channeled into two neatly constructed pools for picnickers. If the trails aren’t in flood, then a cold water plunge in the Mohaka River is also a must.

And just to make sure the South Island isn’t feeling left out, visitors can soak their bones at the Welcome Flat Hot Springs on the overnight Copland Track, the perfect reward for a decent day’s tramp into the wilderness. Or at the edge of a river in the Lewis Pass at Sylvia Flats.