Tapas, tango, art and architecture are all part of Spain's undeniable appeal. By Shaney Hudson

Whether it’s throwing tomatoes at La Tomatina, running with the bulls in Pamplona, partying hard in San Sebastian or touring the tapas bars of Seville, chances are if you’re going somewhere in Spain, you’re going to travel there by train. It’s common knowledge that train travel in Europe remains one of the most convenient, affordable and comfortable ways to see the continent, and not to mention one of the most enjoyable. But in the last few years, Spain has pulled ahead of its EU counterparts, investing heavily in its rail infrastructure and becoming one of the best-connected countries on the continent.

Fed up with carry-on baggage restrictions and shuffling through security checkpoints in socks, I decided to check out the new fast train network in Spain, testing the connections between Barcelona, Valencia, Madrid and Seville; four distinctive cities each with their own personality. 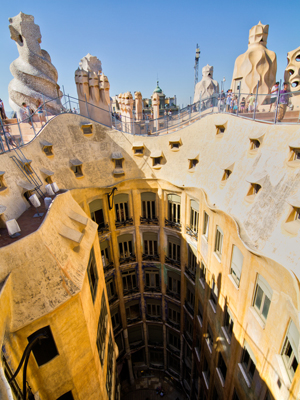 I started my journey in the Catalan city of Barcelona, a sprawling city that lies between the mountains and the sea and shaped by the architectural and creative genius Antonio Gaudi. Barcelona remains the creative hub of Spain; a favourite with artists and lovers for its vibrant energy and inspiring surrounds. While the works of Gaudi shine best during the day, another kind of city springs up in the night time when the stores cease trade.

The old Gothic quarter transforms into an urban art museum, with the metal security roller doors becoming a steel frame for the talented graffiti and graphic artists who call the city home. Crowded and almost unpleasant during the day, around the Barrio Gothic’s famous Cathedral you might hear a Spanish guitarist use the natural acoustics of the centuries old laneways as their amplifier.

Leaving Barcelona, I learn the hard way it’s important to reserve all your train tickets in advance. While I’d booked all my accommodation, I’d failed to lock in my train tickets to Valencia during the peak period of Las Fallas, a vibrant festival held just before Lent.  The trains were booked solid. The one train with seats only had tickets available in first class- severely denting my travel funds, and I had to wait another five hours for it. Lesson learned: book in advance if you plan to use the more popular trains.

However, Valencia and Las Fallas turned out to be worth it. Drummers walk the streets at dawn to wake the neighbourhood, crackers that sound like canons are let off each afternoon, large satirical effigies appear on each street corner and parties spill across the street.

A procession of thousands of men and women in ornate traditional courtesan clothes walk to the town square, a mass of bodices and fans and frills and hooped skirts. The women carry offerings of carnations, which are used to create a giant floral effigy of the Madonna and Child.  But it’s most fun to gather around after the processions, when the pious maidens suddenly whip mobile phones and cigarettes from their corseted busts, resecure tongue rings and stand about gossiping in groups while snacking on paper cones of churros. 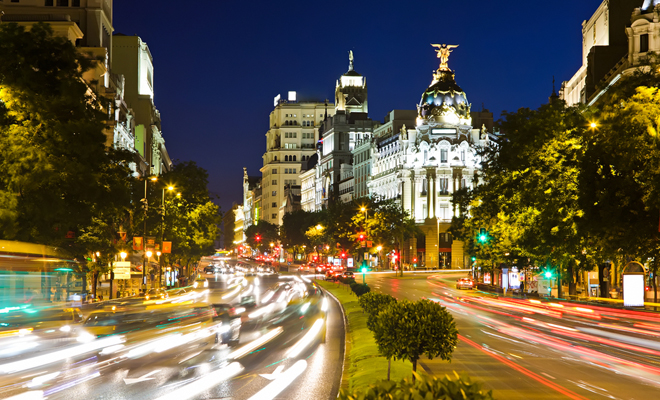 From Valencia to Madrid I get my first taste of the AVE fast train network. Renfe, who run the rail network, have put a substantial amount of money into fast rail infrastructure, connecting Madrid, the heart of the rail network, with Seville, Barcelona and Valencia. The train hits speeds of up to 310 kilometres an hour, resulting in an impressive, lightening quick 90-minute journey to Madrid.

Madrid is one of the most backpacker friendly cities in Europe: easy to navigate on foot, full of bars offering cheap food and drink, and a wicked reputation as a party town like no other. Most of the action gets started just before midnight and continues on until long after the sun has come up. Most people bar hop across the across the barrios, having a cana (a small beer) and pintxos (a small bite), before lying in the sun at one of the large, landscaped city parks to nurse their hangover.

Partying aside, Madrid also has an incredible wealth of fine art to rival the galleries of Italy and France. The best part is that if you plan your visit carefully, you can see most of the galleries for free. Some, like the Caixa Forum and Caja Madrid are open gratis to the public year round, while the big museums, including the Reina Sofia (filled with contemporary works by Dali and Miro) and the Prado (think Goya and Rubens) offer free entry in the evenings after 6pm or 7pm.

Surprisingly, the city even has an entire Egyptian temple; a gift to Spain from the Egyptian government after Spain helped save Abu Simbel during the construction of the Aswan Dam in the 1960s.  It’s situated on a stunning sunset lookout point just up from the Plaza de Espana and Royal Palace, and makes for a slightly eerie twilight excursion. 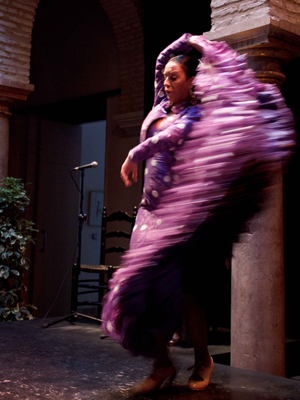 window not just to picturesque countryside, but also the industry and decay that hovers on the outskirts of most European cities. But that quickly gives way to the countryside as we speed south through the plains.

My final train journey brings me to my favourite Spanish city, Seville. Lying at the tip of Europe, it was here that Spanish explorers set out for Africa and Americas in search of new worlds. Because of its exposure to the outside world the city is a beautiful mixture of Renaissance, Baroque and Moorish and Mudejar architectural styles, filled with churches and cathedrals and converted palaces and old Roman ruins. The centre of the city is the Giralda, a medieval tower that was once considered one of the most awe-inspiring man- made structures in the world.

The city streets are lined with orange trees full of bright coloured fruit ripe for the picking - unfortunately, however, even on tippy toes the branches are too high up - while the public plazas are filled with bars and cafes and bikes during the day, giving way to revellers and pedestrians at night.

Along with a good pair of shoes to combat the cobblestones, this is a city where you need to bring an appetite. Seville is home to thousands of tapeo bars, my favourite being the traditional, family run bars that serve large plates of stewed pigs cheeks and spinach and chickpeas and Iberico ham from the bargain price of EUR€2.50.

Waddling to the train station after a long lunch, I glance a little wistfully at the departures board, filled with dozens of destinations throughout Spain I had the inclination, but not the time to visit.

The gentle rhythm of Spanish guitar music flood my ears as I settle into my seat, making good use of the monogrammed earphones Renfe seem to give away like pillow mints. I give myself over to the gentle rocking of the train and the wonder of the shifting landscape: the rocky mountains patched with dense bushland, the small white towns clustered around a church tower and the olive and orange groves that fill the plains. In Spain, I’m convinced that this is the only way to travel.