Louise Goldsbury takes to the weird side in Portland.

The most popular, satirical song on cult comedy show ‘Portlandia’ perfectly describes this underrated city: “It’s where young people go to retire”. They flee from Los Angeles and New York for relief from the craziness, only to run into a brick wall plastered with the local motto: Keep Portland Weird. And weird it is, in a completely fantastic way. 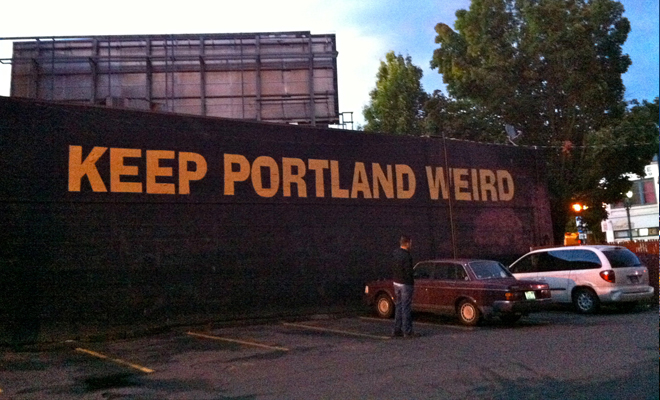 I moved here from Sydney a few months ago, knowing very little about the place, but what I knew I liked: free public transport; good, cheap food; a big music scene; surrounded by mountains and wineries; and more breweries than any city in the world.

The pleasant surprises kept coming as I discovered unfailingly friendly people, brilliant bars and restaurants, hiking and cycling trails, and perfect summer weather. Just be sure not to visit during the very rainy winter – and much of autumn and spring. 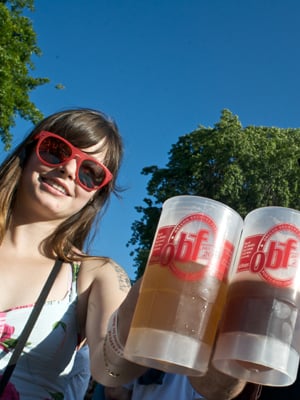 The joke around town is that the sun finally comes out on the day after 4th of July. Then the fun really begins with weekly festivals and fairs, street parties, parades, outdoor art shows, sports and free concerts.

A popular past-time is to go rafting or tubing down the rivers. My boyfriend and I tied together our ‘donuts’ (US$9 from Walmart) and gently drifted down the Mollala for five hours. On the last Sunday of July, more than 1,500 people participate in The Big Float on the Willamette River, which dissects the city, followed by an after-party in the park.

Portland’s city centre is one of the most elegant, clean and compact in the country. Best of all, the main attractions are accessible by the MAX light rail, which has a large ‘free zone’ so you can jump on and off without buying tickets. Highlights include the Portland Art Museum, Lan Su Chinese Garden’s teahouse and the world’s largest bookstore, Powell’s. The busiest spots are the Saturday markets at Waterfront Park and, on any day, Voodoo Doughnut, whose cheeky concoctions include the cream-filled Cock-N-Balls and a chocolate voodoo doll with a pretzel stake through its heart.

The hottest area for drinking and dining is the Pearl District. But for the best value, grab a bite from the food carts that line most streets: as gourmet as fast food gets. For the best view, head up 30 storeys to Portland City Grill during happy hour (snacks and drinks from $4).

My favourite cocktail is Some Like It Hot, mixing Portland’s own Hot Monkey chilli vodka with mango and cinnamon, served at the very dark and mysterious Driftwood Bar. It inspired a trip to the manufacturers, New Deal, which is one of many distilleries that have opened up in South East Portland. A day can be spent walking between four or five venues, tasting the whole range of spirits for $5. A bus to the east side ($2.10) takes around 10 minutes.

Nearby are a couple of ‘urban wineries’, such as Hip Chicks Do Wine, where the product is made onsite, from crushing grapes to bottling, and available for tasting at its cellar door.

But the proudest piece of Portland is its craft beer. With more than 50 breweries, hundreds of pubs and regular beer-fests, the selection and standard are sensational. Sidebar, on North Willams, has a tasting room serving barrel-aged beers; Hopworks is all organic; and McMenamins’ Kennedy School has been converted into a brewery with several bars, live music, a cinema and a cigar lounge in the former detention room.

HI USA offers two great hostels in Portland – one in the hipster hub of the Hawthorne district, and one in the city’s leafy north-west.