There’s a moment in every trip when you realize that what you dreamt, saved, agonized over and planned for is every bit as good as what you hoped it would be. A moment when time ceases to race by and you can freeze the image in front of you as one you will always remember. A place which stands out as over and above the daily sightseeing. A landscape that simply takes your breath away.

It’s a cliché to say that the Canadian Rockies is just such a place. In fact, this is a landscape that transcends superlatives: one outstanding view just keeps replacing another around each bend in the road until you are nearly weary of the never-ending vistas. But, still, there are moments when even this is surpassed. 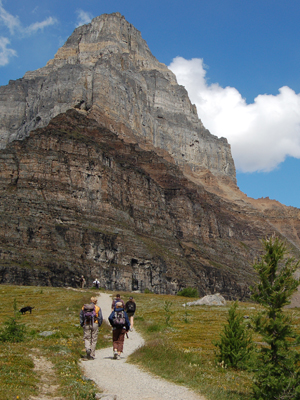 For me, this was a day hike up to Sentinel Pass near Lake Louise. After a two hour steady uphill walk through larch forest, then across an alpine meadow and finally up a switchback gravel scree path, we crested the pass. A 360 degree mountain view literally took my breath away. Ahead, I could see across the divide towards Paradise Valley and surrounding mountain peaks; behind me were the aquamarine waters of Morraine Lake and the breathtaking surrounds of the Ten Peaks. Yes, there are actually ten perfect craggy peaks lined up in order, dotted with ice and glaciers. There are no words to describe this view and no photo will ever do it justice, it was enough to just be there, enough to know I was seeing the very best of the Rocky Mountains.

It doesn’t really matter if you travel the Canadian Rockies from south to north or vice versa, except if you are doing it the hard way on a bike, as cycling from the south is the general wisdom. You’ll get to the end and just wish you could turn around and retrace your steps. This is a towering landscape of craggy ice-topped peaks, aqua blue lakes and dark green fir trees. It is the great outdoors and you want to get out amongst it to really appreciate the environment.

I choose to have two bases - Lake Louise and Banff - but it would be easy to add a third - Jasper. Starting in the north, this is a tourist mountain town that allows you easy access the less visited Jasper National Park. It is the gateway to the Icefields Parkway – Canada’s North/South Rocky Mountain Highway. 230 kms long, this runs straight through the heart of two National Parks, parallel with the Continental Divide.

The Icefields Parkway is billed as the world’s most beautiful drive, and whilst you want to tell them to get real, the truth is that it is an outstanding trip. In summer, this is the highway of travellers – no trucks are allowed, just tour coaches, cars, large touring motor bikes, cyclists and the great North American RV – thousands of them, ranging from small to enormous.

To overnight along the Parkway, you need to camp or stay at one of YHA/HI’s wilderness hostels –  bush hostels in stunning locations that offer you the chance to chill out with other travelers and perhaps see a bear or two wander by at dusk. My pick would be Rampart Creek HI. On the banks of a glacial stream, tucked in under a towering mountain peak, this hostel is cosy and cute, with a little sauna hut on the hill behind, and a large outdoor fireplace in front of the hostel. It’s a place to relax and get to meet some fellow travellers. 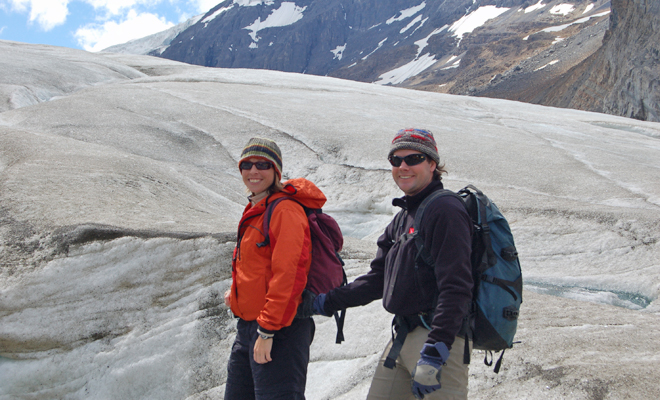 Halfway down the Parkway is the Columbia Icefield – a huge mass of glacial ice that tumbles down into the surrounding valleys like icy fingers forming seven massive glaciers. The largest, the Athabasca Glacier, has been in retreat for over a hundred years. You can join the hordes hopping on the tours up onto it. Yes, they drive onto the glacier. I was a little gobsmacked at this, having been to New Zealand where glaciers are treated with a little more reverence. That said, most winters the ploughed ice track is extinguished and you realize, in this at least, nature is probably bigger than man.

I opted for something more in touch with the environment – an ice walk up onto the glacier; an afternoon’s stroll that skirted crevasses and mill holes and put everything in perspective. Our little group formed the perfect human train, each following in the other’s footsteps across the ice. Our guide was quite determined that we would not fall into any crevasse or ice hole on his watch. We walked for a couple of hours, always looking upwards at the mass of ice ahead of us. When we stopped, he pulled out a photo and showed us just how far we had climbed – a little blip in the bigger picture of the glacier. Suitably deflated, we realized that the vast environment is larger than any of our idle dream. We were here to just experience it for a second and then leave.

All along the Icefields Parkway signs beckon – a walking trail here, a viewing point there. In late afternoon I pass the most stunning glacial lakes, in particular Bow Lake. I know that the weird turquoise colour is the result of glacial debris suspended in the water, but there is still the temptation to think that someone is standing upstream pouring in a lot of dye. With the lake shore carpeted by summer flowers – big fireweed and red paint brush – I linger just soaking it all in. This is the Canada we see on the travel posters, and it is just like the photographs. 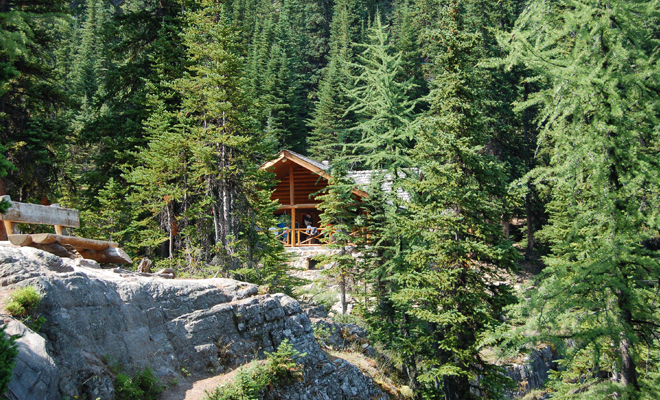 HI-Lake Louise is all that you could want in a hostel. It has a great location in the heart of Lake Louise, a cosy alpine lodge atmosphere and a lovely café to linger in. It’s no wonder that this is a popular hostel with an interesting mix of walkers and climbers, cyclists and families, backpackers and locals.

With my adversity to crowds, I dragged myself out of bed early the next morning and headed out to Morraine Lake. Another perfect lake in a narrow valley, this has more impact than Lake Louise. The lake is set to a backdrop of 10 craggy peaks – the Ten Peaks – that have appeared on the Canadian $20 note for years.

From Lake Louise, it is an easy 50kms into Banff. This much larger town is set in a wider valley and appears less picturesque at first glance. But that is a bit misleading as it has towering peaks, a winding bow river and many lakes surrounding it. The town is tourism central – if you haven’t done any souvenir shopping up to here, then this is the place to spend your money. There’s a standing joke amongst locals that many tourists never get off Banff Street.

On nearby Tunnel Mountain, overlooking the town, HI Banff is another great mountain hostel, the perfect mix of cosy lounges, café and the Cellar Bar for partying. It’s also an easy place to hook up with fellow travellers who want to get out of town and explore some walking trails. And this is where you will run into the bear problem.

Bears are a Canadian fact of life. They may look cute and cuddly, and they were very high on my ‘want to see’ list, but there is more than enough signs and posters around to make you realise that they can also be dangerous. Summer time, and black bears and grizzlies are out berry hunting. They want to eat, eat, eat and protect their cubs. Tourists are not usually on the menu but you really don’t want to get into a face to face discussion with them about it.

The result is that some walks are restricted by Parks Canada to groups of more than six people – the collective group noise and presence has been shown to keep the bears away. We collected up a mix of Aussies and Pommies, with a couple of locals for good measure, and headed up to walk to Sentinel Pass. This was the perfect day; clear, blue skies, a challenging walking track uphill which stretched us but didn’t kill us, and a stunning vista from the top that made it all worthwhile.

The next evening, as I drifted down river on a gentle Bow River Float trip - a large white water raft gliding over gentle river gradient at sunset - I couldn’t stop looking around at the mountain peaks. I was leaving the next day, driving out to Calgary and so-called civilization. This was the time to reflect on all I had seen and done, and to promise myself that I would return. 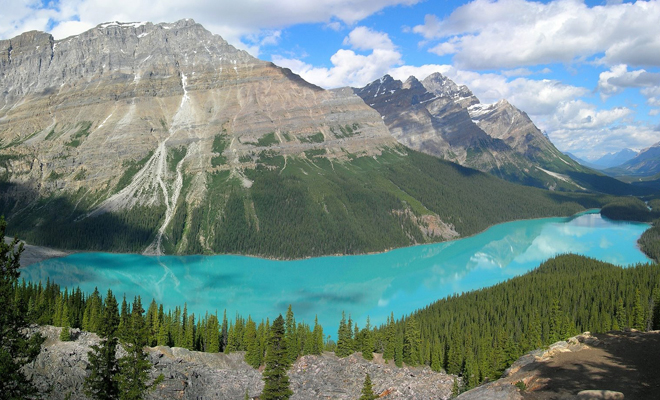