If You Still Think The Capital's Boring, You're In A Shrinking Minority, Writes Sue White.

It’s no surprise that human beings delight in their fifteen minutes of fame, but if the same were true of cities Canberra would surely be blushing by now. Something has shifted in the nation’s capital: the city once widely derided for being boring and daggy is now being heralded as almost, well, hip.

Hip? Canberra? We’re not the only ones who think so. Over the past couple of years, hard-to-impress travel experts from across the globe have also noticed.

The kudos started in 2014, when a New York Times writer noted Canberra’s “big-sky beauty” and “decidedly hipster underbelly”. Fairfax followed, with its travel editor admitting the unlikely phrase “Canberra is cool” was finally worth typing.  Last year, by the time The Guardian acknowledged Canberra as a compelling urban destination with a “world class café culture”, it was reiterating what many already knew: Canberra has changed for the better.

Visiting Canberra in spring has always been popular – the acacias and cherry blossoms are in flower, the weather is perfect for walking or cycling (pesky magpies aside), and the busy cafe scene moves outdoors again.

Given spring is an ideal time to get outdoors, take the short, steep drive up to the National Arboretum (pictured above). Coffee and sweeping views attract almost every demographic, even before considering the audacity of the project: the arboretum is a collection 94 forests from across the globe. While the trees themselves are in various stages of infancy, the site and the concept capture the imagination.

If your visit falls on a weekend, a short drive to EPIC (Exhibition Park in Canberra) will land you at the Capital Region Farmers Market. Packed with produce stalls from across the region, it provides the perfect picnic or BBQ fodder. Given the early start (the whole thing wraps by about 11.30am) you’ll want a beverage in hand. Coffee aficionados flock to Wagonga Coffee’s stall, while hipsters prefer Real Chai’s stand, another local beverage success story. It’s the area’s biggest farmer’s market, but it’s far from the only one.  On Friday nights, the Farmers and Foodies market runs from 3-7pm at the Old Bus Depot in Kingston (pictured below), while every quarter The Forage draws together restaurants, wineries and foodies from across the region for an evening of food and music: the location changes, so check Facebook.

Of course, there are some indoor-focused stops worth making time for, even when Canberra’s weather is at its inarguable best. The Australian National Gallery will rarely disappoint (its next blockbuster exhibition, Versailles: Treasures from the Palace, opens 9 December), while spring is a good time to watch Aussie politics at its rawest by sitting in on Question Time at Parliament House (plenty of options across October and November).

Once you’ve ticked all the above off your list, you’ll need to make sure you don’t miss two of Canberra’s best urban hubs, each a short stroll from the city centre. Slightly to the north is Lonsdale Street Braddon, where food and beer lovers gather, often at outdoor tables. For vegan treats, try Sweet Bones Bakery on nearby Elouera Street – the chai is some of the best in town and the dining options go well beyond baked goods. Nearby, coffee diehards head to Lonsdale Street Roasters, while beer drinkers cross the road to the home of makers, artists and well-patronised food vans at The Hamlet (below). Here, they try a local brew from Canberra’s smallest pub: The Hutch is so small that it only has two bar stools. 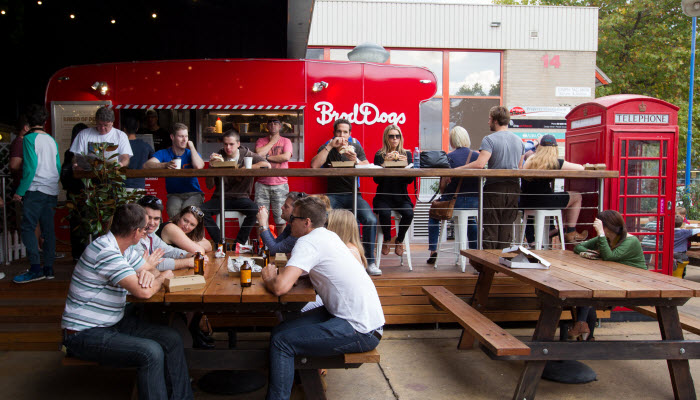 Given the food focus of Lonsdale Street, you’ll want to pause, or perhaps cycle off a few calories with a bike ride around the lake, before tackling the New Acton arts precinct. When people wax lyrical about Canberra’s new vibe, they’ve often been here, either for a drink at New Acton’s visually compelling, slightly upmarket Monster Kitchen and Bar; a movie at Palace Electric (check out the stairwell round the corner – photo worthy); or to enjoy one of the neighbourhood’s community-focused events.

Tired yet? Hopefully not, because in the ‘new’ Canberra, even the national institutions conspire to make evenings event-worthy. The National Botanic Gardens hosts a season of outdoor cinema that is both intimate and inspiring (starts 11 November); the National Portrait Gallery runs ‘adults only’ evening events to time with major exhibitions (series starts in January); while those in town in November should head to the National Museum of Australia. On 11 November this stunning space opens for an evening of music, pop up talks, games, art and bars at its ‘Night at the Museum’ event. Finally, for music fans, if autumn’s Groovin’ the Moo festival feels too far away, there’s always Spilt Milk on 3 December, when cutting edge music, experimental art and culture and artisan food and drink take over Commonwealth Park.

KANGAROOS IN THE CAPITAL

There’s a good reason Canberra is known as the bush capital. Whether you’re visiting from overseas, aged in single digits, or just like the thrill of seeing Australia’s cultural emblem roaming free on a city’s fringe, Canberra is ideal for kangaroo spotting.

Around Lake Burley Griffin, plenty of grey kangaroos hang out at Weston Park (on the cycle route and a nice spot for BBQs). A little further away from the city on the same cycle path, you might see them grazing on the lawns of the Governor General’s house. The house itself is only open a couple of times a year, but the roos are a year-round feature. Next door, the Royal Canberra Golf Club is also home to plenty of kangaroos (you should be able to see some from the bike path).

Black Mountain, Mount Ainslie and the National Botanic Gardens are other good options.

Canberra’s many nature reserves mean you don’t have to leave the city to take a satisfying bushwalk. Mount Ainslie is a favourite of locals: the steep track starts behind the Australian War Memorial. On the hour-ish walk to the top hikers are treated to Aussie birdlife, kangaroos and eventually, a postcard-perfect view across the lake to Parliament House.

With trails through rainforest gullies and across Eucalyptus lawns, the Australian National Botanic Gardens is also excellent for walks, particularly if you have junior travellers in tow.  The location on the side of Black Mountain makes it possible to get quite a good workout if you’re so inclined. In fact, the hills on site are a surprise to many attending the excellent outdoor Sunset Cinema (see main story): getting to the screening site requires a steep 10-minute hike.

Want to go harder? Walk up Black Mountain itself: either start from Clunies Ross Street or take the numerous summit tracks found at the top.