Walking Shoes? On. Camera? Charged. List Of 10 Secret Spots Around Melbourne Waiting To Be Snapped? We’ve Got You Covered.

Can you take a picture of …

Tag #yhaoz on your Instagram pics as you're snapping these secret Melbourne spots and your photo could appear in YHA's next email newsletter! 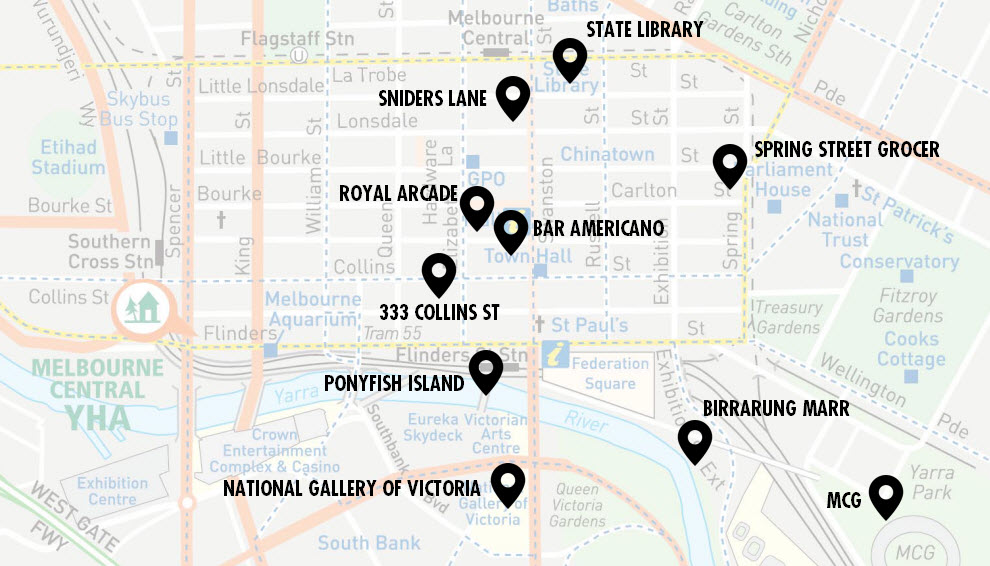 TREATS AT THE SPRING STREET GROCER

The ice cream of the Gelateria Primavera grabs your eye from the street and the grocer’s gourmet fare is a foodie’s wildest fantasy, but the real treats are hidden away in the basement – just follow the spiral staircase down to the cheese cellar, where the seasonal fromage is aged on site.

THE DOMED READING ROOM AT THE STATE LIBRARY

One hundred years old, six storeys high, and home to 32,000 books, it’s a miracle anyone can do any work in the State Library's La Trobe reading room without being distracted by the architectural marvel they’re sitting in.

A COFFEE OR COCKTAIL AT BAR AMERICANO

Bar Americano is so Melbourne it hurts. Serving espressos by day and martinis by night down the dingy Presgrave Place, the shoebox-sized venue is standing room only (seriously, it’s so tiny there’s no chairs).

GOG AND MAGOG AT THE ROYAL ARCADE

Meet the two scariest blokes in Melbourne since Chopper Read and Carl Williams: Gog and Magog, a seven-foot pair of mythical behemoths guarding the clock in the elegant Italianate Royal Arcade in Bourke St Mall.

From the street, 333 Collins doesn’t look like anything special. But sneak inside and you’ll see why it’s called Melbourne’s most exclusive address, boasting an opulent domed Victorian-era banking chamber packed with more marble than a Greek temple.

A POT ON PONYFISH ISLAND

Descend the single staircase snaking down from the footbridge linking Southbank and Flinders St Station to discover a floating island of beer, bubbles, and bar food surrounded by the Yarra.

THE STAINED GLASS CEILING AT THE NGV

There are around 65,000 items in the National Gallery of Victoria’s collection, but few are as awe-inspiring as the work of art on the roof – the largest stained glass ceiling in the world that took Australian artist Leonard French five years to complete in the ‘60s.

This nebulous three-legged, two-headed sculpture covered with a mosaic of ceramic tiles began life in the NGV before being moved to Birrarung Marr, a leafy art-filled inner-city park on the banks of the Yarra.

SHANE WARNE AT THE MCG

Melbourne personalities don’t come much bigger than Warnie, the larger-than-life cricket legend immortalised in 300 kilos of bronze outside Melbourne’s cathedral of sport alongside 16 other champions of Australian cricket, football, and athletics.

AND DON'T FORGET TO TAG #YHAOZ ON YOUR INSTAGRAM PICS!