It doesn’t take long to go from civilisation to wilderness. The water taxi takes just a few minutes to cross Lake Te Anau, the graceful, glacier-carved giant that acts as a border between modern New Zealand and ancient Gondwana.

It docks at Brod Bay where beech forest comes to the water’s edge and mountains rise up behind. The odd walking track passes through, but this is the Fiordland National Park. Roads have been left behind on the other side of the lake.

If ever there’s an argument for never building a tunnel (or gondola, or monorail) to slash the journey time from Queenstown to Milford Sound, this is it. The current, roundabout route makes Te Anau, halfway between, a much better starting point for exploring Milford.

A blissful stroll around the southern reaches of the lake indicates why using Te Anau as a mere hopping-off point is a mistake. It’s approximately 12km from Brod Bay to the town centre on foot, with the track weaving between dense, bird-filled native woodland and cute little covelets. Beech trees slowly give way to crown ferns, then starker sections where creek courses have shifted over time.

Once out of the National Park and skirting the lake’s southern fringe, the photogenic mountain backdrop takes precedence until the track passes the Te Anau Wildlife Centre. Run by the Department of Conservation, it’s home to a few native birds. The kea and morepork raise a smile, but it’s seeing the big, secateur-like orange beak of a species thought to be extinct for 50 years that brings on the double-take.

Even with habitat protection and offshore breeding programmes, there are thought to be fewer than 300 takahe left. And that’s far better than once feared. At the end of the 19th century, they were thought to have died out – but they were rediscovered again in 1948, tucked away in the remote Murchison Mountains.

Those mountains are inside the Fiordland National Park. Beneath them, by the shore, is the home of a somewhat less cute creature. New Zealand glowworms sound delightful but they’re really gnat larvae and they use the light they generate to attract unwitting flies and bugs to their death.

Since 1948, when the glowworm caves were rediscovered independently of the takahe, these larvae have also attracted human beings. The Real Journeys trip to the caves (See end of story for an exclusive YHA deal) begins with a catamaran cruise across Lake Te Anau and then gets considerably weirder. The subterranean adventure only pokes a tiny way into a much larger cave system, but taller explorers have to duck down beneath low arches and sensitive lighting shows the layers of limestone and sandstone that make up the base of the enormous mountains above.

Cleverly erected boardwalks and scaffolding lead through the caves, often as water gushes beneath in an uncompromising underground torrent. It all leads to a waterfall which thunders down – and that waterfall has to be stepped around on the way to a very basic, tiny tin boat.

That tin vessel is how we’ll journey inside. But the lights are turned off, and we’re sworn to silence. The dark doesn’t last long, as the glowworms begin to compensate. Clustered in constellation-like pockets, it’s like drifting along a calm ocean under the night sky. The quiet adds an extra dimension; a sprinkling of magic and transportation to somewhere far, far away.

What we can’t see are the dangling thread-like lines that the glowworms use to catch their prey. That’s probably for the best – some things are best kept as a mystery. Te Anau, however, is not one of them. 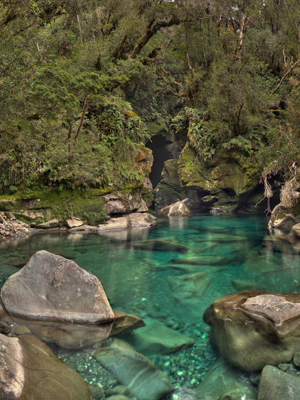 A key advantage of going to Milford Sound from Te Anau rather than Queenstown is that the shorter journey – a two hour drive rather than four – buys more time to explore the Milford Road.

There are plenty of spots worth pulling over for, and for different reasons. Te Anau Downs is surprisingly strong on history. Signs tell of Quintin McKinnon, the man whose explorations forged the Milford Track and Richard Henry, the wildlife conservationist who pioneered the concept of offshore island sanctuaries at Resolution Island in Dusky Sound.

Further along, the Eglinton Valley lookout offers superlative views of the broad valley flanked by mountains, and the Mirror Lakes are a good place for spotting long-finned eels.

Leg-stretchers can pull over at The Divide, and take on the three hour return hike to Key Summit – part of the Routeburn Track and a spectacularly privileged position for taking in the mountain scenery.

After that, the descent towards Milford Sound passes through the granite-hewn Homer Tunnel and passes by The Chasm – one of the country’s most photogenic waterfalls. It’s especially worth getting out for the 20 minute walk if it has been raining – you’ll get wet, but the falls will be pounding.

A lakeside stroll is perfectly agreeable exercise, but for those wanting to give their walking boots a proper workout, Te Anau has the privilege of being the logical jumping-off point for three of New Zealand’s nine Great Walks. The 53.5km Milford Track starts at the end of the lake – usually accessed by boat transfer from Te Anau Downs – while The Divide on the Milford Road is the western trailhead for the 32km Routeburn Track. The Great Walks website offers the most comprehensive guide to the Great Walks.

Of the three, the Kepler Track has two key things in its favour. The first is that it is a circular walk, meaning the logistics are much simpler. The second is that it starts within easy walking distance of a major settlement. The usual starting point is the DOC control gates, where Lake Te Anau flows into the Waiau River. And that’s about 3km away from the centre of Te Anau – meaning it’s just an hour’s walk added on to either end of the circuit for those not wanting the faff or expense of organising transport.

Generally tackled over three to four days (although run in around five hours by the truly fit/ masochistic), the 60km Kepler Track ascends from lakeside beech forest to exposed Alpine ridges. It’s generally regarded as being on the moderate end of the scale, with especially well maintained tracks.

Jump on board and be sworn to silence as you cruise across Lake Te Anau and into the underground world of glowworms. Discover a twisting network of limestone passages filled with sculpted rock, whirlpools and a roaring underground waterfall before drifting beneath the luminous shimmer of thousands of glowworms.