The spookiest celebrations on earth

Everyone knows what an American-style Halloween is all about – jack-o'-lanterns, trick or treat, and eating so much candy that you want to throw up – but the USA isn’t the only country that revels in frightening festivities.

You can’t talk ghoulish get-togethers without starting in the United States of America, a nation that loves Halloween so much their pumpkin-hued President even looks like a jack-o'-lantern (and is twice as scary as one). And the USA’s biggest city naturally hosts its biggest party on October 31: the Village Halloween Parade, a colourful carnival of 50,000 beasts and monsters that are almost as creepy as the ones currently occupying the White House.

This festival is like the hipster version of Halloween – the Celtic nations have been celebrating it since before it was cool. Samhuinn (or Samhain in Irish Gaelic) marks the beginning of winter – one of the four seasonal Gaelic festivals throughout the year – and merged with the Christian All Saints’ Day over time to form the modern Halloween. But the Samhuinn Fire Festival keeps things old school, transforming the cobbled streets of Edinburgh’s Royal Mile into an extravaganza of drumming, costumes, acrobatics and fire-dancing to usher in the Celtic New Year. 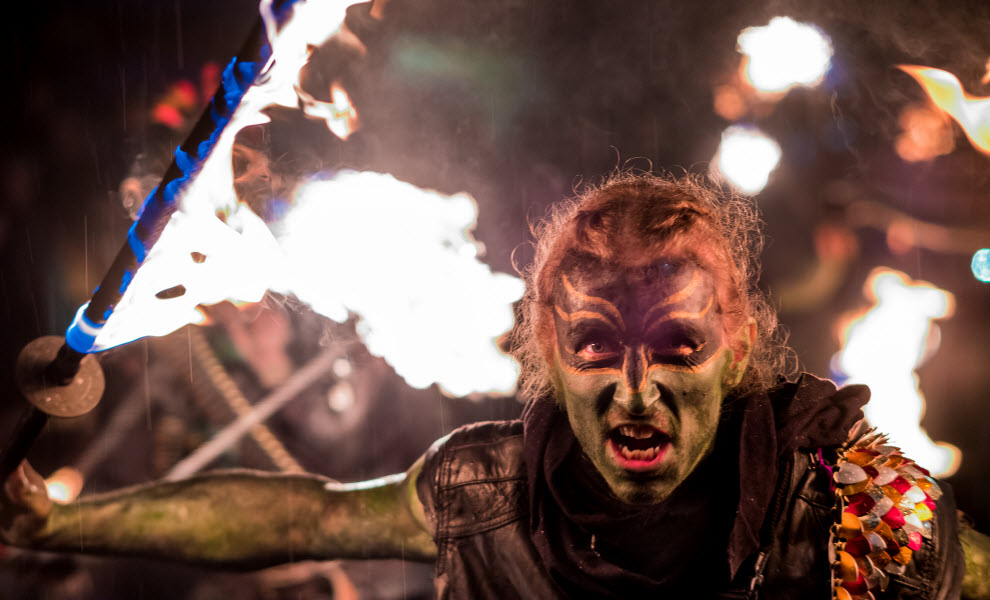 Yu Lan is celebrated on the 15th day of the seventh lunar month – that’s September 5 in 2017 – when restless spirits visit the living… and apparently work up quite an appetite. For the entire month around Hong Kong visitors will see plates of food left out as offerings to the deceased, Chinese operas and dramas performed on temporary bamboo stages for ghosts who need a little entertainment, the burning of incense and joss paper (a.k.a. ‘ghost money’), and lanterns guiding the spirits back to the afterlife. You better watch out, you better not cry, you better not pout, I’m telling you why: a half-goat, half-demon is coming to town to beat naughty children then toss them in his wicker basket to be dragged through the snow. Seriously, this horrifying ordeal is an actual thing in Austria, particularly in the alpine villages around Salzburg and Tyrol, where Krampus is the ‘bad cop’ sidekick of Saint Nicholas, punishing kids who end up on Santa’s naughty list. Like a real-life nightmare before Christmas, hundreds of stick-brandishing horned beasts parade the streets of Austrian towns on the evening of December 5 to terrorise misbehaving children. Think we’ll just stick to a lump of coal in our stocking, thanks. 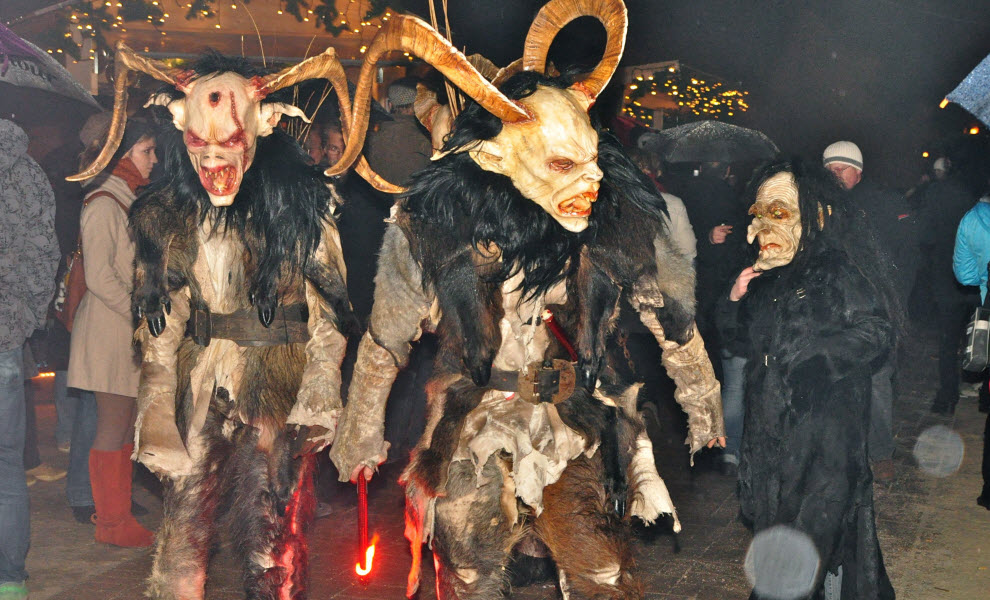 Like the Scots, the Irish have been celebrating Samhain for millennia, but this four-day Halloween weekend in the West of Ireland is a thoroughly modern affair. This year, a local street theatre group is throwing a Port Na bPucaí (‘The Song of the Spirits’) Halloween dress-up parade through the streets of Galway, plus there’s a Running of the Bulls style zombie chase along the seaside Salthill Promenade, an adults-only walkthrough scare attraction called Carnevil at a pub in the city, and the kid-friendly Spooky Fest at the Loughwell Farm Park outside town.

This 500-year-old Japanese Buddhist tradition honours the spirits of ancestors, when the deceased and the living both return to the family home. Obon (or simply Bon) is marked with the Bon-Odori dance to welcome the spirits, which varies from region to region. Customs vary greatly around the country, but Kyoto – arguably Japan’s cultural capital, dotted with more than a thousand Buddhist temples – is home to some of the biggest Obon festivities each August, particularly the Daimonji Gozan Okuribi, which lights giant bonfires on the five mountains surrounding the city. 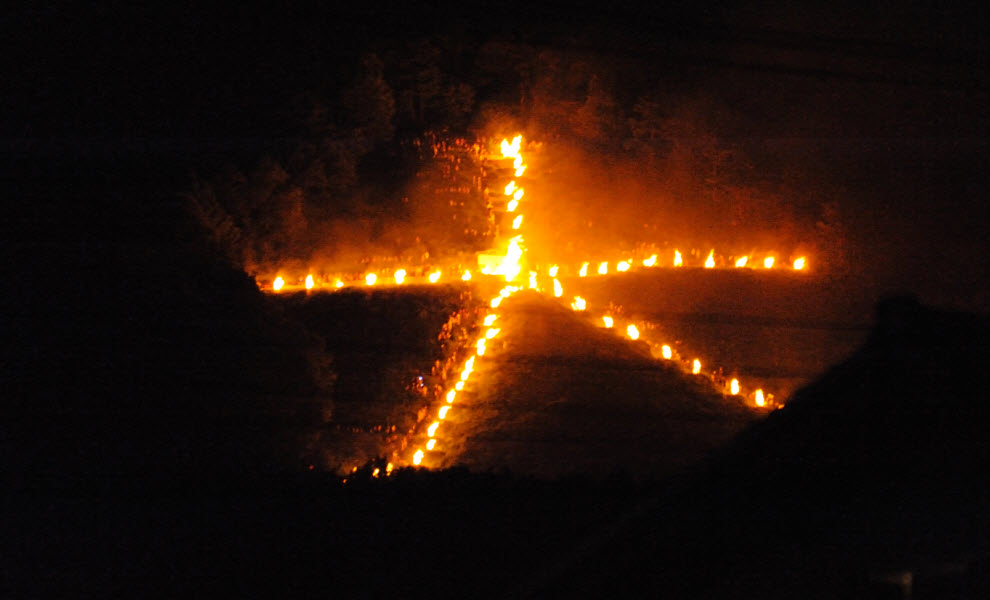 Midsummer bonfires aren’t exclusive to Japan – they’re big in Germany, too. Massive, in fact. Every year on the eve of May, thousands of revellers in the city of Heidelberg follow the leafy Philosophenweg (‘Philosopher’s Walk’) to the Thingstätte amphitheatre overlooking the baroque old town to ignite anything that catches alight, with fire-breathers, bonfires and barbecues filling the wee hours of May 1. Hexennacht (‘Witches’ Night’), also known as Walpurgisnacht after the feast day of Saint Walpurga, stems from the German folkloric belief that witches spent the first night of spring scheming in the woods, and that lighting bonfires would keep them at bay. 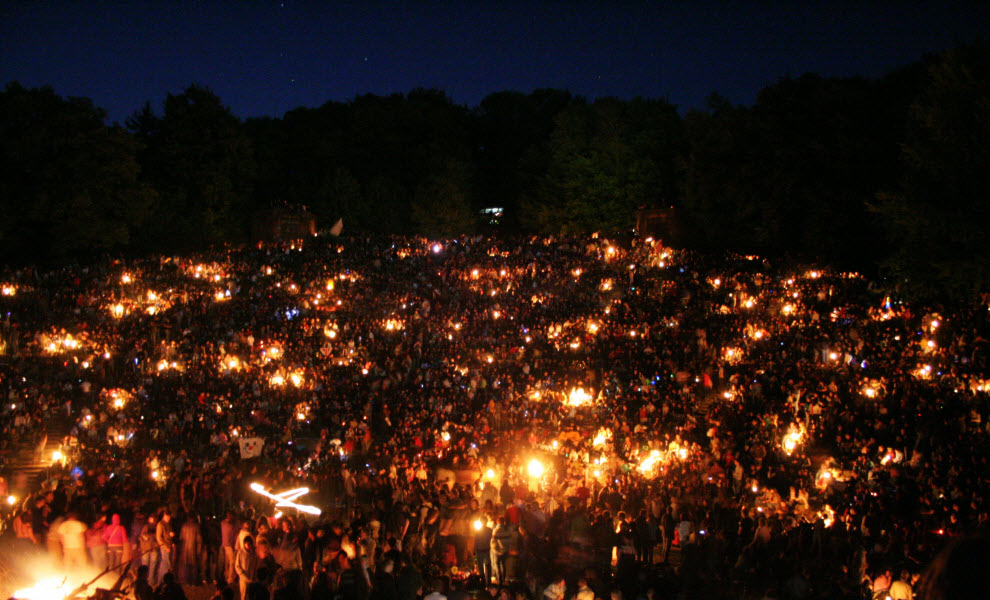 Halloween at the Point Montara Lighthouse

This lighthouse-turned-hostel in Northern California is throwing its 15th annual Haunted Hostel Halloween Festival in 2017, a family-friendly October 31 extravaganza with all the trimmings: trick or treat, a festive feast, face painting, live music, a Day of the Dead Altar, a pumpkin pie eating competition, tours of the enchanted bosk (woods), and a calibre of costume that proves just how much this haunted holiday means to Americans. But beneath the sunny exterior, the Point Montara Lighthouse has a dark past – it was built in the 19th Century because vessels kept running ashore on approach to the San Francisco Bay, so spend the night to see if any of those fallen sailors are still haunting the place… 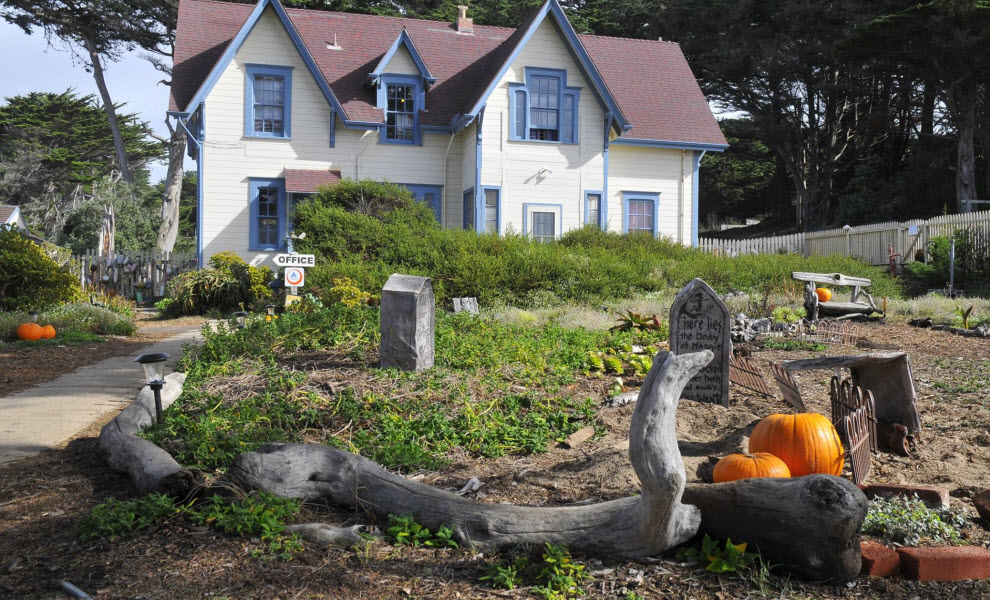 Well, if you think the dress-ups in the States are something, book a ticket to Bulgaria in January, when thousands of elaborately costumed ‘kukeri’ brave the winter chill in the industrial city of Pernik, 20km from the capital Sofia. Also known as the Surva Festival and the International Festival of Masquerade Games, more than 5000 people don beastly wooden masks and fur suits decorated with ribbons and bells to scare off evil spirits over the two-day street parade, a tradition that extends back to ancient pagan rituals.

Stay with HI in Sofia