To Tour or Not to Tour

Shaney Hudson debates whether group travel is survival of the fittest or the smartest way to travel.

From messy room mates to lazy latecomers, bossy bullies and bickering couples, broken buses and guides who believe their word is gospel even when they’re wrong, group tours can sometimes feel like your own personal version of hell. Time is limited in each destination. Schedules and itineraries are set. Cardboard cut out rooms, bland set menus and long drive days dominate. Independence is sacrificed, and anyone who has ever been thrust together with a group of strangers knows that travelling in a group can be a social experiment gone wrong.

It’s enough to make you swear off group travel for good: the one hour heated argument over what colour the group tour shirt should be; the time cut short at places because other people couldn’t set their alarm clocks; the stuff stolen because someone forgot to lock the tour bus behind them, the guides who take a cut of the cash from the overpriced tourist shops they insist on taking the group to.

But not everyone feels this way. For some, group tours offer an unparalleled level of convenience, community, safety, security, affordability and accessibility that simply couldn’t be replicated if they took on a destination on their own.

In the past, people generally fell into two categories: those who swear by group travel, and those who would rather drop into the black abyss than sign up for a tour with others.

But this has changed. While previously most group tours aimed at travellers have stuck to the large group, big bus, strict itinerary model, companies have now realised that they have to cater for people who crave something beyond the traditional archetype.

New styles of tours have emerged, from three-week adventure journeys trucking in West Africa to niche tours that bring like-minded individuals together. As group tours become more flexible, dynamic and sophisticated, their appeal to independent travellers has grown.

Take for example Contiki, long known for their whirlwind booze bus tours around Europe. While these traditional products are still offered and, to be fair, exceptionally popular, the company  also offer more targeted and innovative package tours to special events like the exclusive Coachella music festival in Palm Springs, California, offering daily transfers, accommodations and tickets. Similar tours are offered for events like La Tomatina in Spain, Octoberfest in Germany and Anzac Day in Turkey. 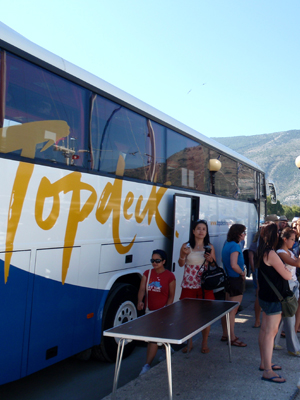 As tours have become more varied and appealing, it has led to a change in attitude from those who used to be strongly anti-group. In fact, it’s now the norm for independently-minded travellers to take part in some sort of tour as part of a larger, more independent trip, be it a few hours to a few days, largely because a group tour is sometimes the best option to experience a destination.

For those setting out to a new destination for the first time, it’s common to book at least a short tour in order to find your feet and learn the ropes of travelling in a different country.

Additionally, there are some destinations that are only accessible through group tours. From countries that have poor transport and tourist infrastructure to destinations that have strict restrictions on tourist visas, taking a tour is the best way to get to a place you couldn’t tackle on your own.  Point to point group safari tours in Eastern Africa, like Cape Town to Nairobi, have flourished because of the limited travel infrastructure available to tourists wanting to get into hard to reach safari parks.

Sometimes group travel isn’t just the best option for seeing a place, but also for experiencing it in a different way. Take for example group sailing trips in Croatia. One of the most popular activities for young people is to cruise between islands in the Adriatic by yacht. While you’d lack the expertise, ability and finances to take a yacht out into the ocean by yourself, by joining a group tour, you’re able to get away from the crowds, experience sailing and discover uninhabited spots independent travellers can only glimpse from the shore.

The key is to be discerning in which style of trip you choose - the level of comfort, the length of time, the size of the group and the reputation of the operator. Researching the destination and the tour company is critical to having a good time on a trip. Group travel isn’t necessarily more cost-effective (in fact, it’s often far more expensive), but sometimes it’s worth paying a little bit more for a tour to ensure you get to see what you want, especially in more remote places like Africa.

However, the key thing about doing a group tour is to give your self over to the experience. You’d paid a lot of money for the guide to be your resource, so let them take the reins and steer the experience. They’ve been paid to take the hassle out of the experience, so take advantage of that.

Once you’re in a group, allow yourself to go with the herd and be part of the community. Being sociable is key to enjoying the experience. Surprisingly seeing how other people perceive a destination, and how it inspires and challenges them, can have a big impact on your own experience. And at the end of the day, group tour or independent travels, a trip is often what you make it - so make the most of it. 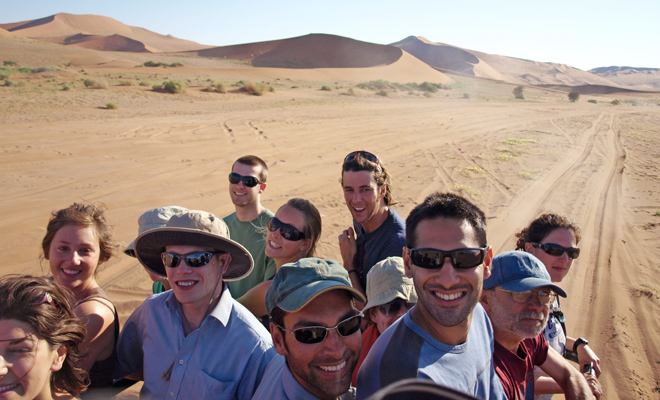