Angkor Wat is the big name in Siem Reap, but there's more than just temples to tempt travellers to stay and play in this part of Cambodia, writes Ewen Bell.

Hidden amongst 1,000 square kilometres of jungle the ancient ruins of Khmer kingdoms are still being uncovered. The last of the great temples were being built long before the Chinese were getting serious about their Great Wall. For five centuries each new kingdom would erect a new temple in respect of Buddhist or Hindu beliefs of the day. The most famous of these is Angkor Wat, which simply means ‘City Temple’.

Hundreds of travellers gather at Angkor Wat each dawn to watch the sun rise behind the inner sanctuaries, and with good reason. The first light is cool, colourful and calm. As the day gets hotter the temples get busier, and by noon the best place to be is back in town with a frozen fruit shake or an Angkor Beer.

Many of the best examples of carvings from around the ancient complexes are now stored in the new Angkor National Museum. Entry is US$12 but the ancient relics and sweaty travellers alike can escape the heat inside.

The ancient wonders of the Khmer are spectacular, but the modern Khmer people are equally special. If the only locals you chat with are Tuk Tuk drivers you might get the wrong idea about Cambodia. For a bunch of smiles bigger than Jayavarman VII head to Siem Reap’s main market, Psar Leu, a few blocks away from the bus terminal.

Most of the shopping here is fresh produce and protein, but you can get a feed from the street vendors too. Fresh coconuts are better than Gatorade for refreshing your thirst, enjoy seasonal fruits like rambutans for a sweet treat, or ‘fish amok’ grilled inside banana leaves is bursting with local flavour.

Aside from taking a tuk tuk across town, you can visit Psar Leu on a cycling tour. Cycle fans can then head out into the country side to get amongst the rice fields. Pedal power makes it easy to stop and chat with kids along the way, pick lotus flowers from a pond or dodge water buffaloes pulling carts of straw. 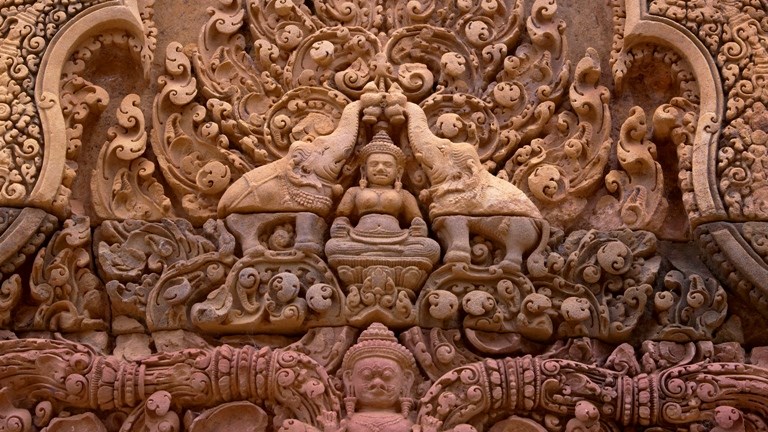 Downtown Siem Reap is the Old Market area. Souvenirs and silk goods dominate the streets but this is also where to start looking for food and fun. Pub Street Alley is suitably named but the bars and beers are easily found anywhere inside the triangle of Hospital Street, Sivartha Road and the river, a short walk from the YHA.

The pick of the pack for genuine Cambodian cuisine is still ‘Khmer Kitchen’, opposite the Old Market itself. $1 shakes, $2 mains. For the best selection of cheap eats off the street keep heading north up Sivartha, past the glamour cocktails at Hotel De La Paix. If you're looking for a break from Khmer cooking then Soup Dragon in the Old Market area is cheap, cheerful and tasty.

For special occasions head for a special night out at FCC Angkor, a short walk from the YHA and the Old Market area. Ladies drink for free before 7pm and for $10 you can indulge in fine cuisine from the Khmer or French menu. $5 Sangria jugs are cool and classy.

A short ride from downtown are the ‘floating villages’ where a cartel organises tourist boats to make voyeuristic voyages past poverty stricken families. It's not recommended. An hour’s drive to the east, however, are the communities of Kamphong Phulk where the experience for foreigners is thankfully more dignified.

The hostel can book a package of bus and boats to get you out there and meet the locals. In the wet season they use wooden boats to paddle between the tree tops of the 'flooded forest', and in the dry season you walk between the stilts of houses.

The flooded waters of the Tonle Sap are a special sight in Cambodia, a reminder of what Angkor once looked like many centuries ago when the ancient cities were islands in the forest, feed by massive rivers.