I first fell in love with The Whitsundays when I was 13. The photos in the calendar promised an aquatic arcadia of drowned mountain ranges fringed with castaway beaches and coral reefs harbouring animals that seemed exotic beyond words.

Of course, no photos compare to the real thing, especially when seen from the air. I told myself this as, 20 years later, I swallowed my fear of heights and boarded a fixed wing aircraft for a 60 minute islands and reef flight, ticking off a bucket list experience.

Everyone gets a window seat in the eight-seater aircraft and we were soon glued to them watching nature’s television below, oohing and aahing as we drew closer to the swirling white sands of Whitsunday Island’s iconic Hill Inlet and Whitehaven Beach.

Of the 74 islands in the Whitsundays group only seven are developed, Whitsunday Island is happily not one of them and its white sands and emerald water are all the more dramatic against the backdrop of untouched forest. But this was just a teaser.

One of the seven natural wonders of the world and the largest living structure on earth, The Great Barrier Reef covers more than 2000km from the tip of Cape York south to Bundaberg. The stretch of Reef near the Whitsundays lies near its heart, and as I peered out my window the distant stains of colour on the sea transformed themselves into creamy reefs and azure lagoons marooned at the edge of the continental shelf.

We circled Reefworld pontoon, which perched at the edge of Hardy Reef, accessed via the ribbon of deep blue channel that separated Hardy and Hook Reefs.

Below, the expansive lagoon of Hardy Reef was littered with a rash of reef formations, its waters glinting teal to cyan to the lightest mint green in the shallows. Keep your eyes peeled for fleeting views of the reef’s romantic icon – Heart Reef – naturally formed into the shape of (you guessed it) a heart. As tropical paradises go, it’s a stunner. I couldn’t wait to get into it. 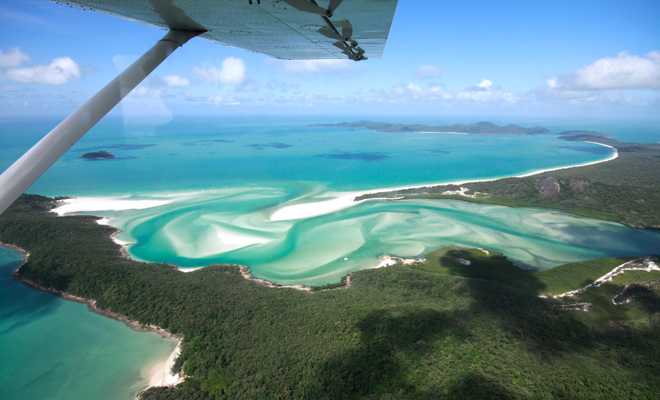 In a country with more than 10,000 beaches, Whitehaven Beach is regularly voted Australia’s (and one of the world’s) best. It comes as no surprise that its impossibly white sands are top of any Whitsundays wish list.

Getting there is half the fun with Ocean Rafting, who operate daily tours out to Whitehaven Beach on their semi rigid inflatable rafts. Abandoning shoes, 26 of us climbed aboard the appropriately-named Wild Thing, the braver few opting to hang on to the sides. Skipper Sarah gunned the 500hp engine while our Eco Host for the day, Cam, hinted at what was to come. We set off noisily and Sarah deftly showed off some jet boat-like fishtails, dips and power brakes before heading into the Whitsunday Passage and towards the first stop.

This is no leisurely cruise but travelling at speed means you get there sooner and have more time to enjoy the beach or snorkelling. As we drifted into secluded Mantaray Bay at the northern tip of Hook Island I felt a shiver of excitement. Only yesterday I had been flying over this bay imagining the underwater world below. Slipping into a lightweight stinger suit (to protect against sunburn as much as to avoid any late season jellyfish), I stepped off the raft and into a school of yellowtails. The humped forehead of an inquisitive wrasse glided by, followed by a brilliant blue surgeonfish, like fashion models on a runway. Trailing the wrasse towards an outcrop of staghorn coral, I became aware of the so-called “soundtrack of the reef” - the incessant snap, crackle and pop of fish feeding on the coral and unseen snapping shrimp.

If you’re buoyancy challenged, noodles and life jackets are available to help you bob on the surface and enjoy the show below. Flippers are also free for more intrepid Cousteau types who want to glide through the water and cover larger areas.

Time goes fast when you’re underwater, and all too soon we were back on the raft on our way to Whitsunday Island while rhapsodising about the countless species we had seen: beaked parrotfish; anemones; yellow butterfly fish; orange and white clown fish; a giant clam.

It’s an easy 10 minute stroll through the forest of Whitsunday Island, the largest of the archipelago, to Tongue Point Lookout.  As you reach it the forest dissolves and you’re greeted with a glorious palette of blues, aquas, greens and the startling white sands of Hill Inlet, with Whitehaven Beach beckoning in the distance.

Ocean Rafting is the only tour operator with direct access to Hill Inlet, allowing you time to enjoy the views, rainforest and Inlet without feeling rushed. If you’re lucky, you might even spot rare estuarine sting rays amongst the tidal shifts. But it was Whitehaven that had brought us here, so while Sarah and Cam set out a buffet lunch (optional), we giddily disembarked at the southern end of the beach to revel in the famous white sands and see-through water. The secret to Whitehaven’s dazzling white sand is its 98% silica content, though how it got here is still something of a mystery. And while the reflective glare makes sunglasses a must, unlike regular sand it doesn’t retain heat. It felt luxurious to let the fine sand sift through my toes without having to hot foot it down to the glassy water. With a good hour or so on the beach, there was plenty of time to enjoy a post lunch swim, stroll some of the 7km long stretch of beach, or wander the Whitsunday National Park trails (there are facilities at Hill Inlet and Whitehaven). For me, it was enough to lie back and be tranquilised by the sun and scenery of this enigmatic beach. 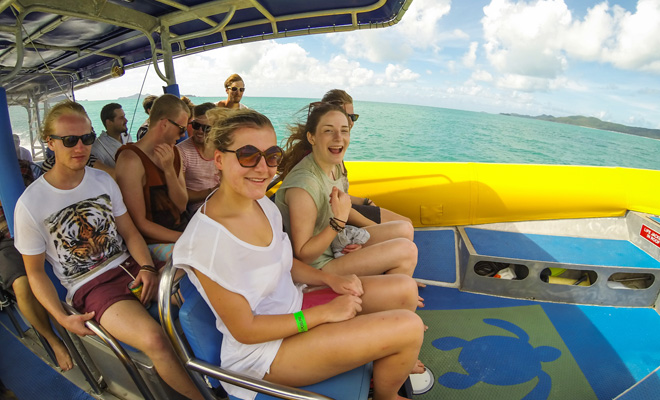 Divinely-situated Airlie Beach is the gateway to The Whitsundays and a great base for exploring the region. Despite a multi-million dollar cosmopolitan revamp of the town centre Airlie retains its village vibe, though now you’ll find as many gourmet eats as backpacker bars. The waterfront is (not yet) overdeveloped, and a wander along the foreshore brings you to Airlie’s man-made lagoon. A focal point of the town, the lagoon is an oasis of palm trees, sandy beaches, water as clear as a caipirinha, and grassy embankments overlooking the Coral Sea.

It’s possible (and highly recommended) to walk, cycle or even segway along the 3.7 km  Bicentennial Boardwalk that winds from the lagoon to the beachside suburb of Cannonvale, passing Abel Point Marina and Shingley Beach. Here, if you have ever wanted to try the SUP craze there are few better places. Sheltered from ocean waves and undertows by the Great Barrier Reef, the waters of The Whitsundays make for a gentle initiation to pretty much any water sport you can think of. Jet ski, kayak, sailing, snorkelling, diving – it’s all here in The Whitsundays. Take a boat across to Daydream Island, the closest inhabited island to Airlie Beach, to visit the world’s largest open-air aquarium. This microcosm of the Great Barrier Reef allows you to hand feed and walk among resident stingrays, sharks and barramundi.

The Whitsunday Sailing Club offers twilight yacht racing every Wednesday from 3-7pm. Yachts are often short of crew and volunteers are welcome. Turn up at the Sailing Club at 3pm and you’re likely to join a crew, even if you’re a novice sailor. Afterwards, gather at the club for results over a tasty dinner on the balcony as the sun sets on the Coral Sea.

Reefworld
Reefworld pontoons at Hardy Reef and Knuckle Reef offer a range of activities on and in The Great Barrier Reef Marine Park. Snorkelling gear is provided, and if you want to see the best of the reef you can take a guided reef safari, introductory or certified dive. If you prefer to keep your feet dry, the pontoons have underwater viewing chambers as well as semi-submersible submarines.

Jet Pack or Flyboard
Strap a jet pack on your back and soar through the air James Bond-style, or if Back to the Future is more your style, ride the waves on a skateboard-like flyboard. Airlie Beach is one of the few places in Australia (and arguably the most beautiful) where you can experience these adrenaline activities. It’s not cheap but neither are the thrills.