You don’t need to ride a camel from Sydney to Perth to have truly unique adventure; there are bite-sized breaks that offer a taste of the distinctively Australian travel experiences on our doorstep. David Whitley set out to conquer the Stuart Highway.

Another locust hits the front of the car. The windscreen is becoming an insect graveyard. You don’t expect to have to use your wipers in the South Australian outback – the horizon-grabbing hills of the Flinders Ranges are parched piles of scorched rubble. But it’s insect guts you need to clear, not raindrops.

The Flinders Ranges is the first of three major diversions off the Stuart Highway as we head across the dry, lonely heart of the Australian continent. Uluru and Kakadu are still to come; the big, highlights that make the long days of driving across the desert worth the travel. 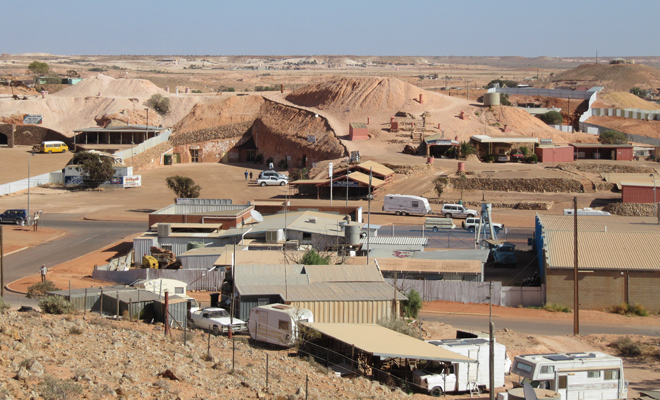 As we follow a road with sharp twists and turns through Port Augusta and into the Outback, it quickly becomes apparent that crossing Australia from south to north isn’t about the major stops; it’s about the journey. Travelling up the 3000 km of road that divides Australia is the least boring “boring” drive imaginable.

The landscape sprawls under a blazing sky. It’s harsh; it’s thrillingly desolate and intensely vast. At the top of every bump, the car feels perched above the whole, unending universe.

The Stuart Highway was named in honour of the first European to complete this enormous journey, John McDouall Stuart.2012 was the 150th anniversary of Stuart’s incredible conquest. It took him six attempts to before he led the first successful expedition across the Australian mainland from south to north and return. The masses haven’t been able to follow him for all that long. The highway – which doesn’t quite follow Stuart’s route, but isn’t far off – was only sealed in the 1980s.

After 150 years a lot has changed. First stop is Woomera, the formerly secretive military town that is known as a giant weapons-testing range. Curiously, the visitor centre there prefers to concentrate on Woomera’s contribution to space exploration rather than its efforts on behalf of the world’s arms industry. It’s the surreal factor that makes the town worth a stroll round. Outside the primary school is a park full of rockets, missiles and anti-aircraft guns.

The highway thunders on, past salt lakes and lonely roadhouses until rusty salmon-coloured mounds appear on the horizon. This is Coober Pedy, the opal mining capital of the world. It has a wonderful, rough-and-ready feel, yet it’s surprisingly cosmopolitan. Chinese restaurants, Serbian orthodox churches and Italian clubs pop up on the scarred landscape, in between scrap metal art instillations and some of the world’s oddest show homes.

Summer temperatures in this remote part of the desert get seriously hot. And given that most of the population spends its working hours exploding holes in mines, it makes sense to build homes in the same way. Ceilings may be low, natural light may be largely conspicuous by its absence, there may be the odd bit of dust around – but these cave dwellings are surprisingly luxurious.

Driving north, the scenery subtly begins to change. The saltbush and spinifex get bigger then start to give way to shrubs and trees. Wedge-tailed eagles soar high above the car and the air gets stickier.

We also get into a groove; the stints behind the wheel begin to feel normal. It becomes less about the wonders that await at the next stop, more about cranking up the stereo playing games to pass the time. We start taking bets on whether the next vehicle coming the other way will be a car, a caravan or a road train.

Roadhouses become sources of entertainment – each one seems to have an absurd gimmick, such as plastic aliens or camel rides or a tethered-up emu.

The sprawling landscape of the iconic Stuart Hwy 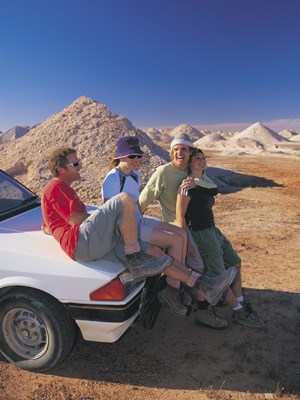 Driving up the middle of Australia with mates to share the ride with is tremendous bonding experience. It’s an endurance test, but for the most part, the brain can be switched off and a smile switched on. It’s telling that when we arrived in Alice Springs, the sighting of a roundabout was the trickiest obstacle we’d encountered for days.

After Alice we flew through another 1500 km, passing through the town of Katherine, known for the Katherine divine Gorge, passing the opportunity to visit Kakadu as we blazed a trail to Darwin. Three weeks of wide open space, centuries-old rock formations and absurd Outback pubs, reaching the end of the Stuart Highway in Darwin is literally the end of the road.

We look back at the car, covered in red dirt and dead insects. The back seat is full of impulse-buy cowboy hats, a stuffed crocodile and tacky souvenir stubby-holder depicting three kangaroos ‘getting jiggy’ that we bought on the way. That’s ‘it’; the memories stacked up on the way are far more important than the journey itself.

Alice Springs YHA
Alice Springs YHA traveller hostel is built within the grounds of an historic outdoor cinema. Make sure you book your accommodation with us, for nightly movies under the stars!
View Details