The Rocks used to have a reputation as a slum, frequented by sailors and crooks. By Lee Atkinson

Sydney Harbour might be a millionaires playground, but you don’t have to be rich to see the best of it, says Lee Atkinson, who takes a trip back in time in The Rocks. And better still, there is now a new YHA hostel right in the heart of this historic area - Sydney Harbour YHA.

There are almost a dozen historic old pubs in The Rocks, and they all offer good beer, fine food and lots of atmosphere and it doesn’t really matter where you go, you’ll be in for a good time. 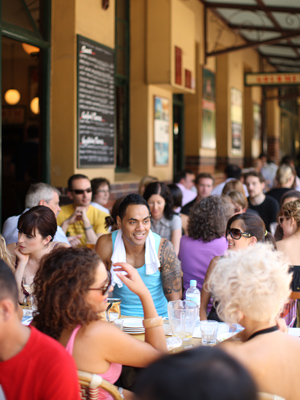 But it wasn’t always like that. Times past, you had to be very careful where you drank in The Rocks. Certainly not the Heroof Waterloo, where rumour has it that there are secret tunnels that connect the pub to the harbour and unfortunate drinkers would be shanghai’d onto ships.  Or the Whalers Arms Hotel where, according to urban legend at least, beer was brewed on site using water drawn from a well in the back yard. When the patrons complained that the beer tasted a bit off the publican drained the well to find the body of a decomposing prostitute at the bottom.

It’s stories like these that transform one of the most colourful suburbs of Sydney into one huge free outdoor museum. You can’t help but get a real sense of living history as you wander around the back alleys and laneways and down concave steps worn by the passing of countless feet. Modern day shiny Sydney may be just down the hill, but here is another world, where the past seems not that far away at all, and you can still see the old pulleys on the former bond stores, foundations of old workers cottages and the remains of public latrines built into the rock face that gave the suburb its name.

Until the late 20th century, when it became a gentrified tourist destination full of galleries and touristy shops, it was seen as a hotbed of vice, renowned for its debauchery, brothels, drunken sailors and other unsavoury characters. By 1900 the authorities viewed The Rocks as an overcrowded slum and they used an outbreak of bubonic plague (that actually only killed 3 people) to start to clear the area. However, the pendulum is now swinging the other way, with historians using evidence of social and economic life (including excavation on the site of the new hostel) as proof that the locals enjoyed a better standard of living that originally thought.

These are just some to the stories you’ll learn at the Rocks Discovery Centre, a fantastic free museum in a restored 1850s sandstone warehouse that focuses just on The Rocks, and at the nearby Justice and Police Museum, housed in the old police and court building near Circular Quay. The old cells, courtroom, prisoner docks and spiked gates are still there, and there’s usually an interesting, if not downright quirky exhibition showing, but what makes this place so wonderfully chilling is the array of confiscated weapons and forensic photographs of past crimes and bad guys, most of which was put together in 1910 as part of a collection used to instruct new constables in the wicked ways of the local criminals.

Life here was certainly mean and tough, and not just back in the 19th century. On Gloucester Street there is a row of four tiny terrace houses and a corner shop that were built in 1844. They were home to more than 100 families over 150 years, right up until 1990, quite astounding given the primitive and cramped conditions. It’s now a museum called Susannah Place, and the one-hour guided tour, coupled with the oral histories, bring the life and times of the tenants alive.

It’s one of the things that sets The Rocks apart from most tourist precincts in other cities around the world.  Real people still live here.  And not just rich people either. Take a walk down to Millers Point and you’ll see many of the terrace houses that were saved from demolition by the Green Bans in the 1970s, and despite being on some of the most expensive real estate in Sydney they are still public housing.

But the thing I really love about The Rocks are the many free (or really cheap) attractions.  It means you can spend two or three days here and not get bored – or run out of cash.

Start at Sydney Observatory on the hill behind Cumberland Street. Built in 1858, Australia’s oldest observatory was a working one until the 1970s when increasing light pollution made observations too difficult, and it is now a museum. Highlights include the Cadi Eora birrung, which looks at Sydney’s stars from an Aboriginal perspective and the Transit of Venus, which back in 1769 was one of the main reasons why Cook set sail to the other side of the world, discovering Australia after observing the transit in Tahiti.

Just next door is the SH Ervin Gallery. Run by the National Trust this gallery is all about Australian art. For more head down to along the western shore of the point to the old finger wharves of Walsh Bay, where you can follow the history of the area and the people who worked and lived there on story boards and artefacts on display. Juxtaposed against all this gritty industrial heritage is a modern sculpture trail with supersized bright art installations from some of Australia’s best known artists, including Brett Whiteley.  My favourite, though is Jimmie Durham’s Still Life with Stone & Car, a crumpled red Ford Festiva convertible that has a huge boulder inside it, left seemingly abandoned in the middle of a roundabout. Head back towards Circular Quay through The Argyle Cut, a tunnel through the sandstone ridge built by convicts in chain gangs.  Poke your nose into Cadmans Cottage, built in 1816 this two-story simple cottage is one of the oldest buildings in city. The Museum of Contemporary Art (MCA) is just next door, and it’s also free. And don’t forget  Government House over in the Botanic Gardens, they have free guided tours every half hour. When the house was built it was the most sophisticated example of Gothic Revival architecture in the colony, and as you would expect, inside there is a grand collection of Australian furniture and art. What you don’t expect to find is the stunning collection of contemporary glass art and modern furniture mixed in with the old.

But the best bargain of all has to be a walk across the Harbour Bridge. It will cost you almost $200 to climb it but crossing it on foot via the pedestrian walkway is free. Look out for the sign on Cumberland Street that says ‘Bridge Stairs’ and then climb the 200 steps to the top of the south-east Pylon Lookout for views almost as good as what you get from the top of the arch, but $190 cheaper. The pylon lookout also features exhibitions on the history and construction of the bridge, which was officially opened in 1932 (although the ribbon was cut by a dashing mounted guardsmen who appeared out of nowhere brandishing a sword, much to the consternation of the Premier and other officials). Who says you have to be rich to see the best of Sydney Harbour?