Carla Carouso feels the call of adventure in the Red Centre.

Sooner or later, the call of the wild is going to happen – even for this city slicker, accustomed to corner cafés and late-night shopping. The desire to escape the concrete jungle, don loose-fitting clothing and thongs and be sprinkled in red dust will eventually kick in with vigour.

And, for such a getaway, the Northern Territory’s Red Centre is the place to do it, brimming with cavernous gorges, boundless deserts and remote Aboriginal communities.

Here, there are also two things you absolutely can’t miss – Uluru and Alice Springs by night.

A trip to the Outback is not complete without seeing Uluru.

Uluru, or Ayers Rock as it’s also known, is a large sandstone rock formation in Northern Territory’s south, part of the Uluru-Kata Tjuta National Park. The World Heritage-listed site is sacred to the area’s Aboriginal people, the Anangu.

Mention you’re visiting the big rock and the inevitable question from family and friends will be: “Are you going to climb it?”

The Australian government has deferred a long-term decision to ban people from climbing the Aussie icon, but visitors can still climb it for several years to come. However, the Aboriginal community and environmentalists would prefer you didn’t. Hence, why when we pulled into the national park, we received an entry ticket reading: “Please don’t climb Uluru.”

Before arriving, relatives had egged us on to climb it, saying it would be the experience of a lifetime. But a friend also said she’d chosen not to when she’d visited, because it hadn’t felt right. For myself and my travelling companion, we were indifferent – it would be a case of wait-and-see.

Still, seeing the 346 metre-high rock up-close for the first time was definitely inspiring. Postcards really don’t do Uluru justice. I was quite unprepared for its majestic presence as the sunlight set it ablaze. The red-orange hue, the age-worn texture, the sheer size. It felt mystical; moving.

After getting snap-happy, we discovered the climb was actually closed due to strong winds at the summit, making up our minds momentarily about whether to climb it. So instead we decided to go for a walk around the base. And it was fascinating to see the rock’s unique features so close, including its caves, water holes and ancient paintings.

Along the way, we noticed a park sign, which further warned about the climb: “We have a responsibility to teach and safeguard visitors to our land. The climb is dangerous and too many people have died while attempting to climb Uluru. Many others have been injured while climbing. We feel great sadness when a person dies or is hurt on our land.”

We also witnessed the memorial plaques at the base − a chilling reminder of the 36 deaths that have been recorded on the steep climb (including a man in April, 2010, who collapsed on the way down − the first climbing fatality since 2000).

When we returned from our meandering, we discovered the climb had been opened up again. And, for some reason, despite the earlier warnings – the climber deaths and the sacred significance − we still felt compelled to attempt heading uphill and christening our hiking boots.

Besides, there were plenty of other brightly-clad climbers, laden with backpacks, merrily making their way up the rock – and one young girl, who barely looked 10, making her way down on her bottom. It suddenly felt significant. Like we could be part of history.

So, we did it – we took a few tentative steps up the monolith. And then, soon found ourselves clinging to a few smaller rocks at the side, just looking up at the vast cliff-side stretching upwards before we’d even reached a handrail. The thought of having to get to the top and then come back down again frightened us no end. So, two minutes in, we gave up, forgoing the experience altogether. Also, admittedly, relieved – like it was the right thing to do.

The Uluru-Kata Tjuta Board of Management have devised a plan which outlines that the Uluru climb will eventually one day be replaced with new visitor experiences.

In the end, we weren’t among the 100,000+ people who climb the rock every year against the wishes of the traditional owners.  But, as we found, visiting Uluru was still a moving experience – climb not included. If you’ve travelled the distance to Uluru, stopping in at Alice Springs makes sense, being just 450 kilometres north-east of the Aussie icon by road.

Alice Springs is the Northern Territory’s second largest town and, if you’re keen to beat the heat, the alluring alternative is to soak up its atmosphere by night. As we did.

The first night, we headed along to a nocturnal tour at the Alice Springs Desert Park, where endangered species can be spotted in its Mulga Walk enclosure. Expert guides, bearing torches, helped us weave through the darkened landscape, providing specialist commentary along the way. We spied bilbies and mala (finely built hare-wallabies) scuttling amid the scrub. Many creatures that would have been near impossible to see ordinarily in the wild. Plus, there was just something mystical about seeing the MacDonnell Ranges − some of the oldest mountains in the world − aglow from the city lights.

Our nocturnal adventuring took us the next night on a sunset camel ride with Pyndan Camel Tracks. The tours – on White Gums Cattle Station – are run by cameleer Marcus Williams, who has handled camels from the Simpson Desert to Broome, India, Malaysia and Brunei.

Being camel-riding virgins ourselves, nothing could have prepared us for the shock of taking a seat on the back of a kneeling camel and then having it climb to its feet. It felt impossibly high. But soon, we relaxed into the humpback creatures’ ambling stride. And it was like imagining the Outback through the eyes of the Afghan traders from many moons ago. Later, we got to feed the camels as the sun went down on the family-run camel farm.

Of course, such activity can work up a healthy appetite. So we rounded off the night with a meal at The Overlanders Steakhouse. Feeling brave, my partner tucked into the Drover’s Blowout – a four-course feast, featuring crocodile, kangaroo, emu and camel meat, feeling a tad guilty about the camel part, having just got up-close and personal with the gentle, friendly creatures. I went for a tamer option: bangers and mash.

The next day, we hit the road, heading for Queensland. But, as for our Red Centre adventure, we felt we’d seen, tasted and smelled plenty – a rich smorgasbord. 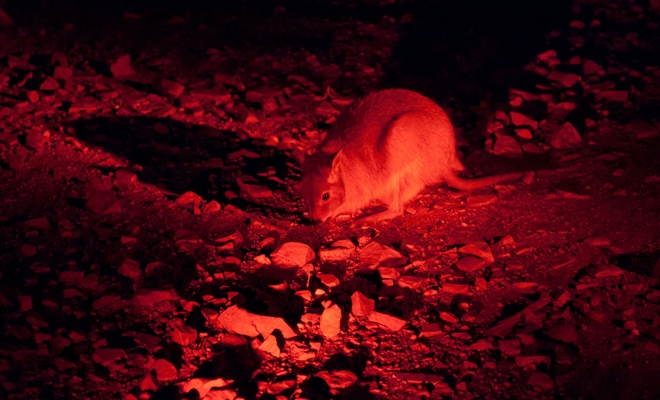 Alice Springs YHA
Alice Springs YHA traveller hostel is built within the grounds of an historic outdoor cinema. Make sure you book your accommodation with us, for nightly movies under the stars!
View Details
Ayers Rock - Outback Pioneer Lodge
Due to the impact of the Covid-19 pandemic, Ayers Rock - Outback Pioneer Lodge is currently closed and will reopen mid-2023. We are sorry for any inconvenience.
View Details