10 signs you're dating an Australian

Australians - those sun-kissed, laid-back, fun-loving folk, brave enough to inhabit a land with the highest amount of dangerous animals in the world, yet soft enough to complain when the temperature dips below 20°C. If you're not from around here and have been lucky enough to fall for an Aussie - or if you are from around here and are dating a non-Aussie - you've probably had a lot of very confused moments throughout your relationship. We're willing to bet at least one of those moments are featured on this list.

1. There's literally always a jar of Vegemite in the house

If you’re from out of town, chances are, you hate this nasty black stuff and have no idea why it's a thing. We get it, it’s an acquired taste. But Australians have grown up with this delicacy and we are very defensive of it. We've spent our lives having it on our toast for breakfast and on our sandwiches in our packed lunches, so it’s part of who we are. If you live with an Australian, you definitely have a jar of Vegemite lurking in the house. Maybe it comes out every day, maybe it comes out once every 3 months, but every Australian knows it’s basically a law to have some Vegemite on stand-by, for emergency cravings. Remember: the golden rule is white toast, lots of butter and a TINY smear of Vegemite! Giant spoonfuls are enough to scar anyone for life - it's not Nutella!

2. You have no idea what they say half the time 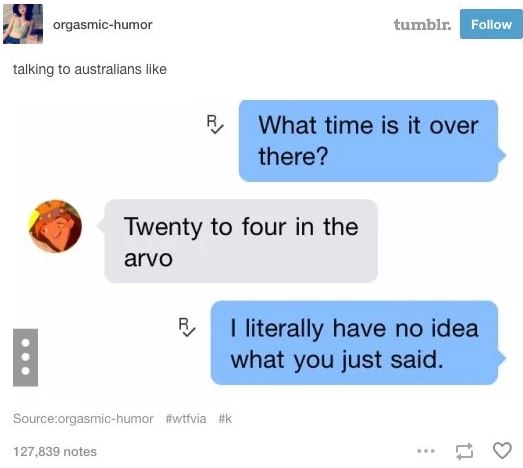 You say gas station, we say servo. You say McDonalds, we say Maccas. You say afternoon, we say arvo. You say duvet, we say doona. You get the picture. Okay, sometimes our version of English is more of a dialect than an accent. We can't help it - we like to shorten things, or rename them so that they're completely unrecognisable (for example: a remote location = "woop woop"). But the more time you spend with your Aussie lover, the more you'll pick up on and appreciate the absolute ridiculousness of Australian English. You'll soon know exactly what your partner means when they say, "Can you hand me my thongs, I need to run to the bottle-o before the sausage sizzle this arvo." Maybe you should start out with this guide.

3. They think they can't get sunburnt

Yes, Australia is hot and we're used to the warm climate. But for some reason, most fair-skinned Australians are under the impression they can spend 5 hours at the beach and apply sunscreen maybe once, and the unforgiving Aussie sun will somehow miss them. Well, as you'll soon find out on your many beach dates with your Aussie, this is rarely the case. No matter how much your dearest love tells you "nah I dont really get burnt, hey" or "I can't get burnt while I'm in the water" you really shouldn't listen to them. But hey, at least you can look forward to the next few days of listening to them complain, rubbing aloe vera on their backs and then seeing them peeling their dead skin off, and enjoying it way too much.

4. Their drinking habits are weird af

Why the F do Australians drink alcohol out their shoe?

We love a drink down under, but that doesn't mean we consume alcohol like normal humans. The Mediterranean custom of enjoying drinks with food over a long period of time and, you know, being able to handle your liquor, is unknown to Australians. Nope, we classify a good time as running to the bottle-o (liquor store) barefoot, pegging a bag of casked wine to the clothesline and spinning it around and sometimes literally pouring a beer into our shoe and drinking it from there. The results of such antics are usually not pretty for anybody involved, yet we continue to do it again and again and again. So when your Australian lover announces that they want to "get on the piss," you should probably run. Or proceed at your own risk...

The craziness of Australian, um, "cuisine" doesn't stop at Vegemite. Fairy bread = hundreds and thousands on buttered bread, an absolute must at children's parties. Pies have meat, not fruit. Burgers come with pineapple, fried egg and beetroot. Apparently it's weird that our national animal - kangaroo - is also a popular meal. You've probably been a mixture of shocked and horrified at some of the things your Australian partner eats, and they've probably felt the same when you tell them you've never tried these insane dishes. They will then proceed to force you to try them all, and tell you you're "doing it wrong" if you say you don't like them. But never fear, Tim Tams - AKA the pinnacle of all treats - are genuinely delicious no matter where you're from. We've done the research.

6. They can apparently do everything barefoot or half-clothed

Visitors to this beautiful country have expressed their concern at the high volume of Australians seen barefoot at anywhere from the supermarket to the voting polls. Australians are also often out and about in various states of undress, due to coming from the beach or it just being really bloody hot outside. We're willing to bet that at some point, you asked your partner why on earth they're going out in public in their swimwear and/or barefoot. It may seem alarming at first but trust us, do things your partner's way for a while and you'll develop soles of steel - very useful when running across piping hot sand. You'll also come to love the less-than-casual dress code when the temperatures climb and you don't want to wear more than a singlet, shorts and thongs (that means flip flops).

7. You can never complain about distance ever again

A flight from New York to London is 7 hours. A flight from Athens to Marrakech is 4 hours. Heck, in Europe you can drive to the next country in little more than hour. Our guess is you found the flight from your home town to Australia a little rough. Now, imagine doing that literally every single time you want to go overseas. Chances are, if you've complained about a 10 hour flight in front of your Australian, they've immediately jumped down your throat about the things they have to do to travel. Look, we're very far away from the rest of the world and it's our right to complain - we would kill to be able to get somewhere in a 10 hour flight. Australian tourists don't hang around in Europe for months on end for nothing. We literally just want to put off that 23 hour flight as long as possible.

8. Your Christmas traditions will change

So, your Australian is the real deal and you've made the big move to be with them. If you're from north of the equator, your Christmas traditions are about to change dramatically. Gone are the days of mulled wine and eggnog by the fire - instead you'll be peeling fresh prawns under the sun with the barbie sizzling away in the background. We can't give you a white Christmas, but we can definitely give you a white sand Christmas on one of our picturesque beaches. It's a big adjustment experiencing Christmas when it's 30 degrees celsius and not 30 degrees farenheit, but we love our summer Christmases down here. Not sure what to bring? We've got you sorted with the ultimate guide to Aussie Christmas foods.

9. They know how to dance the "nutbush"

Okay, bear with us, because this is a weird one - it's something that most Australians are so accustomed to, they think the rest of the world does it too. Are you familiar with Tina Turner’s rendition of Nutbush City Limits? Well, when it was first released, Australia loved it so much that someone, somewhere developed a full on dance to it. The origins of the dance are disputed, but legend has it a sports teacher at a school developed it to teach to their students, and the phenomenon spread from there. Today, there isn't an Australian in the country who doesn't know it, and it often gets whipped out at parties and weddings. If you want to dance the nutbush like a real Aussie, your partner will definitely be able to teach you. You can also learn it here.

10. They think Chris Hemsworth is a god 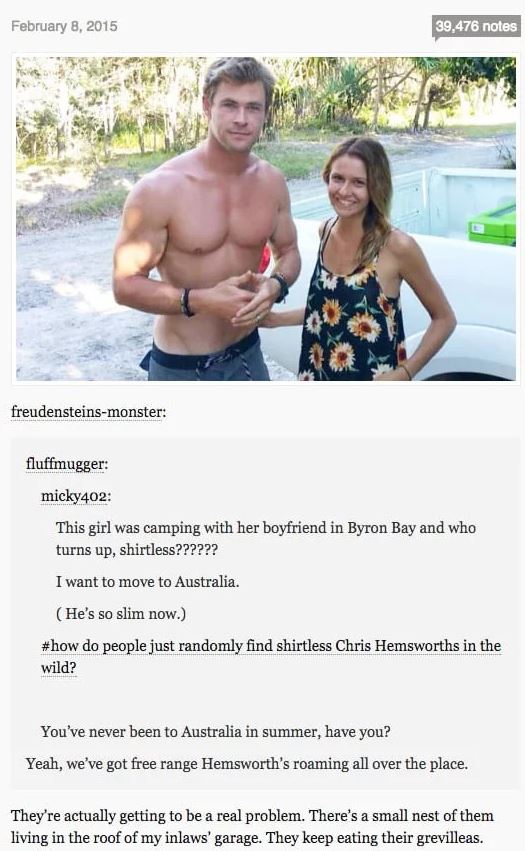 There aren't too many Australian superstars, so you can imagine we basically the worship the ones we do produce - especially the legends like Chris Hemsworth who actually continue to live in the country once they've cracked the big time. Your Australian will get super excited every time you express a liking for any Australian celebrity - and probably tell you all about how they started on an Australian soap like Home & Away or Neighbours. Contrary to the above post, it isn't that common to see wild Helmsworths all over the country, but one lucky backpacker did run into Chris, who proceeded to show him true Australian mateship and fly him to Byron Bay in a helicopter!