Beyond the Great Ocean Road

While many drive the famous Great Ocean Road in Victoria, not as many venture further west writes Bernhard Sayer – to that area midway between Melbourne and Adelaide just made for touring by car.

Koalas everywhere; I can’t believe how many there are.  Every tree I glance upon seems to be home to a small, peaceful, often sleeping, furry ball of cuteness.  I’d never seen one in the wild, but here, they are everywhere.

I’ve come to Cape Otway, the southernmost point on Victoria’s western coast.  For years I’ve promised myself a driving holiday in Victoria, and finally I’ve put the intention into reality. And surrounded by countless koalas, the journey has been worth it for this moment alone.

The west of Victoria is only a matter of a few hours’ drive east from my home town of Adelaide, and of course even closer to Melbourne.  I plan to visit places I didn’t see when on childhood family holidays, and take the roads less travelled.  Thankfully for a trip with these criteria, it’s in a region of Victoria ably supported by wonderful YHA hostels.While many drive the famous Great Ocean Road in Victoria, not as many venture further west writes Bernhard Sayer – to that area midway between Melbourne and Adelaide just made for touring by car. My initial drive from wet and rainy Adelaide is possibly the most zigzagged trip to the Victorian border ever made, but I believe among the most rewarding. The drive to Pinnaroo is justified for the vanilla slice at the bakery alone. I swing south and drive through the gently undulating Ngarkat Conservation Park.In between showers, the park softly shines in the midday light, the mallee scrub preventing the sandy dunes being blown away by the fierce southern winds.

Soon I’m in western Victoria, heading for Edenhope.Sport fans might want to seek this town out as it’s where you can join the Aboriginal Cricket Trail.Australia’s first touring team of cricketers to England were 13 indigenous men from this region in 1868, and the trail has been established to commemorate this significant part of Australia’s sporting history.

An hour later, the Grampians explode into view.By now the sun has broken through and the hills are bathed in rich afternoon light.There is plentiful evidence that the vegetation is recovering after the bushfires of a couple of years ago.The Grampians look as beautiful as ever.

The YHA at Halls Gap is a welcome destination after a long drive. I spend the evening cosily sitting around the lounge room fire with my fellow travellers. 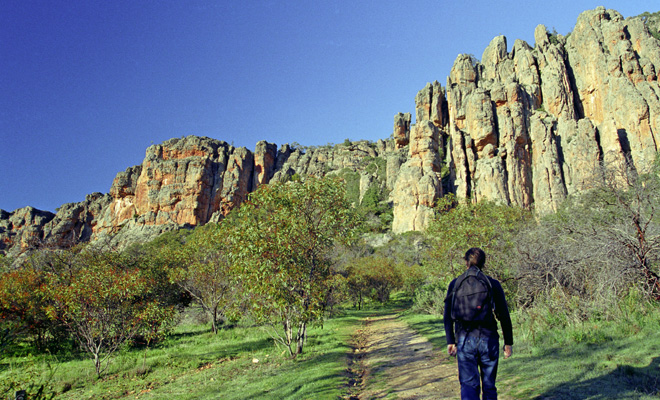 The next couple of days are wet with breaks long enough to allow me to get out and enjoy the outdoor beauty of this area. I head for the Grampians’ northern most peak, Mount Zero.The views are vast, stretching towards Mount Arapiles to the west, and looking over the Wimmera plains to the north. Nearby are the Aboriginal rock art sites at the Gulgurn Manja and Ngamadjidj shelters.The latter is a rare site where white clay was used to depict human figures on the cave walls, whereas the former reveals a beautiful vista over the stretching plains below.

I head south past the volcanic cone at Penshurst’s Mount Rouse to Port Fairy passing through this ordinarily sleepy port on a busy AFL Grand Final day.

The Port Fairy hostel is warm and welcoming, and I decide that I’ll stay here again on my way home.But it’s time to head east. I stop in at the Logan Beach whale viewing platform at Warrnambool and join dozens looking hopefully out to sea, spotting a tail barely a couple of hundred metres off the beach. 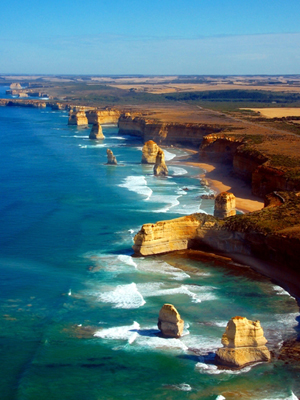 Reaching the Great Ocean Road, like everyone else, I visit the 12 Apostles, although the name is not so accurate anymore, but whatever the number it’s still a spectacular sight especially when it’s blowing a gale. How some people can be brave enough to take helicopter flights over the area is beyond me – I’m happy to stay on solid ground.

And so the road continues to wind, climb and fall until finally I reach Apollo Bay.  At the Apollo Bay Eco YHA I again spend an evening escaping the outside chill by the fire, this time talking to a couple of fellow travellers.  One of them has cycled all the way from Kingston in South Australia’s south east, and the other has just finished a five day trek along the Great Ocean Walk.

Their energy levels inspire me to get out and work the legs. The next morning I head for Sabine Falls, the highest in the Otways at 130 metres, and then to Stevenson’s Falls. I might be in southern mainland Australia, but it reminds me of Europe, with a small forest of pines protecting the entrance to a hidden valley which is capped with the beauty of the falls, cascading with fresh vitality after the recent rains.I could have stayed here all day.

I take Turtons Track to Beech Forest, a sharply winding road that demands slow speeds. One reason is the tightness of the corners but a better reason is the unspoilt majesty of the rainforest that surrounds you. A coffee at the Ridge Cafe, looking over the surrounding forests, is a great place to pause and reflect on the beauty I’ve seen.

Heading for home, I get a phone call telling me that I’ve got a new job. To celebrate, I decide on another koala viewing session at Cape Otway. And this time, among the hundreds of others on display, I find a mother and baby climbing together.The little one looks so young I decide that it must be taking its first independent steps away from mum’s back.It’s a beautiful sight – and the perfect way to wrap up the trip.