As these majestic mammals set off on their epic mid-year migration, Tom Smith discovers the best places to spot them.

“Whale watching is a humbling, emotional experience that you’ll never forget,” says Karen Inglis, manager of the Hervey Bay YHA in Queensland. She’s busy preparing for the stream of visitors that accompany thousands of humpbacks on their migration up the East Coast to Australia’s whale watching capital, 300km north of Brisbane.

Hervey Bay is the final stop on the whales’ 10,000km journey north each winter, when they seek warmer waters to mate, give birth, raise their calves and just chill out. Hervey Bay is also your launch pad for the postcard-perfect K'gari (Fraser Island), which shelters the bay for humpbacks to rest up and raise their young before the long haul back to Antarctica.

“What makes Hervey Bay so unique is the fact the whales are not in transit – the whales come into the bay to rest, play and frolic,” Karen explains to me. “This also means that because they’re relaxed and feel safe, they approach the boats and put on quite a show!”

You only need to stroll around Hervey Bay to see what whales mean to the place. There’s the 14.8m wide, 22-tonne sculpture of ‘Nala’ the whale leaping out of the ground in the middle of town. There’s the nine-day festival each August to celebrate the annual migration. There’s the veritable flotilla of boats coming in and out of the aptly named Whale Bay Marina - the best way to see the humpbacks rolling, spy hopping, and breaching, as well as performing their rhythmic songs to an admiring audience. It's a cruise on one of these boats that'll give you the best shot at getting up close and personal with the majestic animals. Port Stephens is home to 130 bottlenose dolphins all 12 months of the year – but when the big boys roll in during their annual journey up the East Coast in late May, the dolphins know it’s time to shuffle off centre stage.

“During the winter months they take on the role of supporting act for their bigger cousins,” says Bronny Starling from Imagine Cruises, an eco-friendly whale-watching tour operator with over a decade of sustainability certification under its belt.

“There’s nothing quite as spectacular as a 30-tonne animal lifting its entire body out of the water...To see them socialise, travel, and navigate their surroundings is quite special and to see the sheer size of these animals is quite humbling.”

And when you’re standing in a catamaran transfixed as a humpback breaches through the surface of the water then slaps its enormous body back into the sea, it’s hard to disagree. Port Stephens – a region of 26 sparkling beaches just two hours’ drive north of Sydney – will witness 25,000 whales pass their coast between now and November, a humpback population that’s growing almost as steadily as their number of followers.

To accommodate whale watchers, the council has opened a new walking path along the striking Noamunga Headland in Boat Harbour just down the road from the verdant Samurai Beach Bungalows Port Stephens YHA, while Tomaree Head and Barry Park in Fingal Bay both offer sweeping views of the Pacific.

Oh, and whales aren’t the only wildlife you’ll see in Port Stephens. There’s the resident dolphins, a rookery of albatross that come to feed during the cooler months, and a small colony of fur seals that sun themselves on Cabbage Tree Island at this time of year.

But the humpbacks leave you in no doubt about who are the stars of the show. 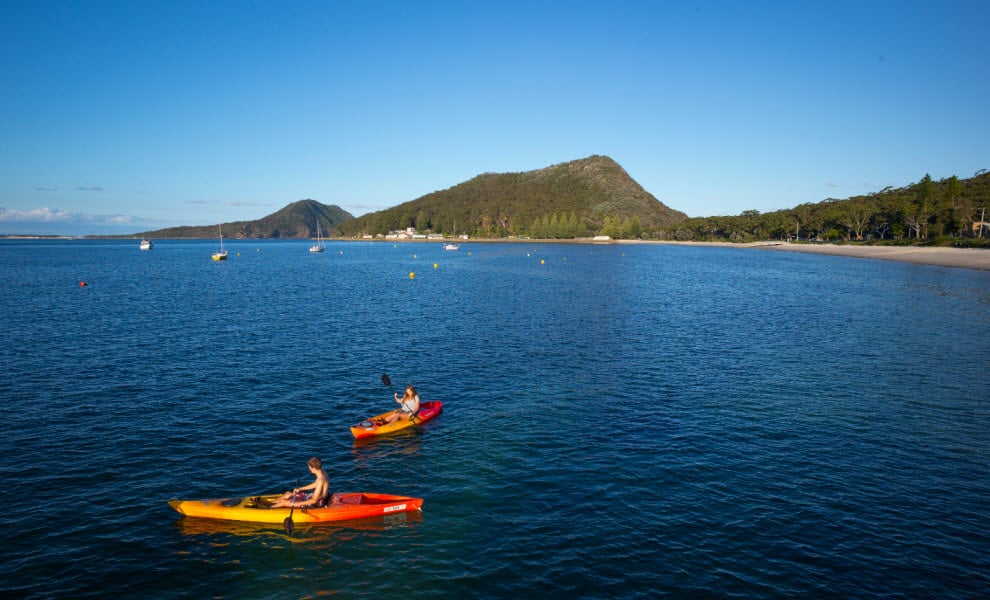 More than 30,000 whales – mainly those acrobatic humpbacks but also the occasional southern right, minke, and blue whale – will migrate past Sydney’s rugged cliffs each season, the biggest mass migration in the world.

The true value of a Sydney whale watching cruise is those epic views of Sydney Harbour you'll be treated to before cruising out to sea for an unforgettable morning or afternoon spotting whales. Once bobbing on the open sea beyond Sydney Harbour, either by experience, vibrations or a difference in currents, the animals seem to know they're near a city and often linger a bit to show off. They certainly know you're there to see them, at the very least.

As you motor back between the heads, it's not uncommon to have dolphins skip alongside your vessel. Seeing the sun fading over the western horizon as you motor back towards the twinkling lights of Sydney at dusk is a particularly special experience, and we highly recommend it.

Stay: one of the great-value YHAs around Sydney

Experience: A morning or afternoon of epic whale watching 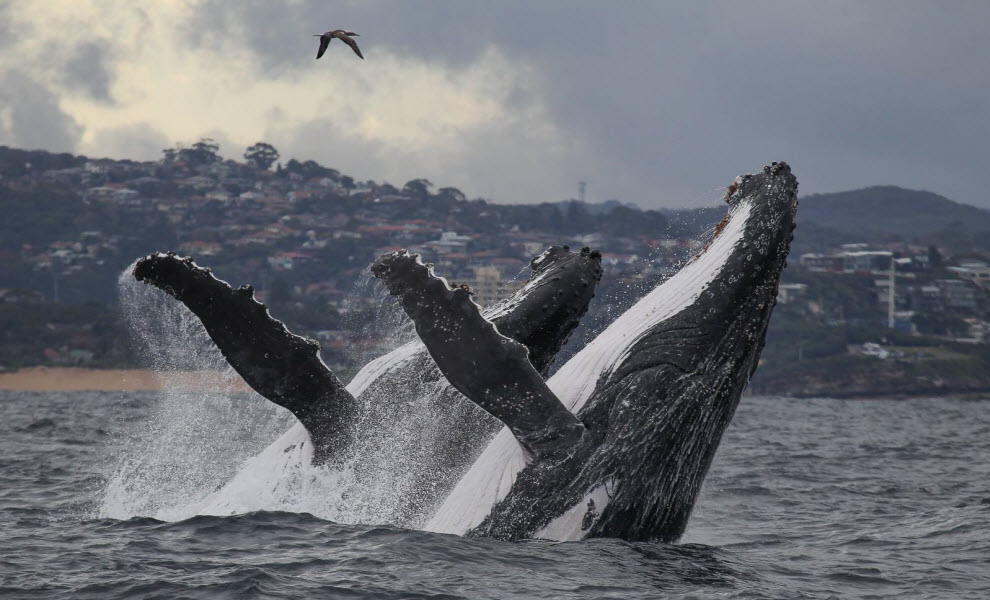 There’s something in the water around Albany...literally.

The spectacular port town – 400km from Perth on the south coast of Western Australia – is accustomed to placid humpbacks and southern right whales floating past between June and October.

But a pod of killer whales? That was always going to make a splash when marine scientists made the discovery in recent years, in Bremer Bay canyon east of Albany.

The rare congregation of orcas was found in a tiny, nutrient-rich patch of water that catches cold, salty currents from the Antarctic for six weeks each summer (February-April), luring up to 100 killer whales – as well as plenty of other marine life for dinner – to the biological hotspot 40km off the coast.

If you’re after something a little more tranquil than a Free Willy feeding frenzy, stick to the whales wandering past Albany, basing your adventure at Albany YHA, a 19th-century property with ocean views from the top floor.

The seaside town is a former whaling port, but the hunters’ harpoons have long been traded for travellers’ long-lens cameras, and the old whaling station has been converted into a world-class museum.

“We recommend it highly to our guests,” says Stefanie Ball, part-owner of the Albany Bayview Lodge YHA. “The area was recently renamed Discovery Bay and many facilities were upgraded. A wildlife park and botanic gardens with only plants native to South West Australia have been included. It is also located in the Torndirrup National Park and is surrounded by many other natural tourist attractions.”

It’s a scenic one-hour hike from the museum to Peak Hill, the highest point in the Torndirrup National Park, which offers panoramic views of the Southern Ocean as the whales seek shelter on their migration to and from the Antarctic.

But be warned, nutrient-rich salty water isn’t the only thing being blown north from Antarctica – remember to rug up to escape the wintry bite of the wind.

Lazy whale watchers, your prayers have been answered.

No need for a tour. No need for a bushwalk. No need to even change out of your pyjamas if you can’t be bothered. The balcony at Port Elliot Beach House YHA boasts 180-degree views of Basham’s Beach, a sheltered bay an hour south of Adelaide, where a pod of southern right whales raise their calves each winter. That means dawn-till-dusk whale-frolicking every day in July and August.

“We have avid whale watchers stay with us every year as one never gets tired of watching these majestic creatures,” says Steve Woodward, who manages the historic and beautifully maintained sandstone lodge.

“To see the southern right whale is quite a rare and special opportunity, and now with their increase in numbers along the southern coast of Australia, they come so close to shore it makes for the perfect opportunity to witness the whales giving birth and spending the winter in the local bays to fatten up their calves.”

The miracle of life is just that – a miracle – when you learn that whaling almost wiped southern rights off the face of the earth in the 1970s. Even the species’ name comes from the fact that their languid nature made them ‘right’ to hunt.

But these days, intrepid southern rights travel as close as 100m to the shore when they’re gliding between Victor Harbor, Port Elliot and Middleton along the dramatic Fleurieu Peninsula, and set up their nursery just 50m from the sand at Basham’s Beach, making it prime whale-watching territory.

Or you can see it all from the YHA balcony in your PJs. Up to you. 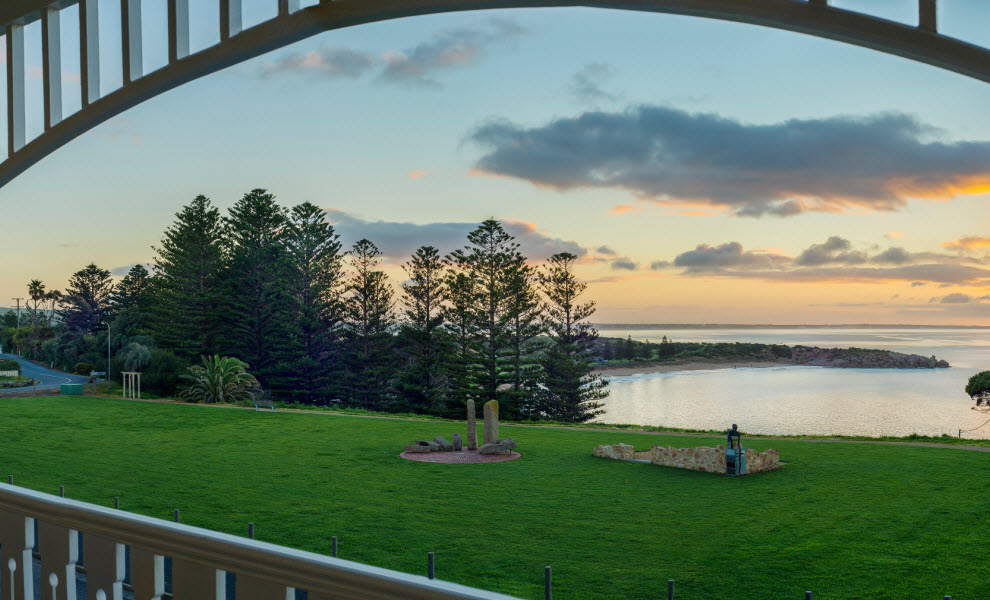 Humpback Whale Swim
From $345
Experience a once in a lifetime swimming encounter in the Ningaloo Reef with Humpback Whales from Exmouth. This unforgettable tour runs in August, September and October.
View Details
Hervey Bay YHA
This multi-award winning hostel in the seaside town of Hervey Bay is conveniently located within an easy walk of nearby beaches.
View Details
Hervey Bay Whale Watch Cruise
From $110
Book this half day whale watching cruise in Hervey Bay for a memorable cruise you won't forget! Hervey Bay is one of the best places in Australia to spot Humpback Whales on their annual migration.
View Details
Port Stephens YHA
Gorgeous beaches, lush bushland, stunning bay and sea views and a great chill-out spot - that's Port Stephens and its award-winning YHA.
View Details
Sydney Harbour YHA - The Rocks
The only hostel in Sydney that has views of Sydney Harbour, the Sydney Harbour Bridge and the Opera House. Sydney Harbour YHA is the best place to stay in Sydney for the New Years Eve fireworks!
View Details
Sydney Central YHA
Our heritage-listed building, opposite Central Station, is ideally positioned near the Sydney Airport Train line, Darling Harbour, Chinatown and the Powerhouse Museum.
View Details
Albany YHA
Located in the historical part of Albany, the hostel dates back to the 1800's. Old world charm cheerfully blends with modern amenities to create a relaxed atmosphere. Magnificent views over Princess Royal Harbour from the top story.
View Details
Port Elliot YHA
Great Port Elliot Beach Accommodation! Port Elliot Beach House YHA, on South Australia's spectacular Fleurieu Peninsula, is in a breezy, historic building
View Details
Brisbane Whale Watching
From $135
Join this 4.5 hour Brisbane whale watching cruise to witness Southern Humpback Whales on their annual migration to and from Antarctica. Soak in the views whilst enjoying a delicious cold buffet lunch.
View Details
Byron Bay Whale Watching Cruise
From just $99.00
Experience a whale watching tour with a difference on this boat cruise in the waters of Cape Byron. Witness these gentle yet playful giants of the ocean as they migrate past the Byron Bay Headland!
View Details
Byron Bay - Cape Byron YHA
Cape Byron YHA is the perfect place to kick back and relax after a day in the surf. Just across the road from the beach - bike and boogie board hire is available.
View Details
Byron Bay - Byron Bay YHA
Looking for the perfect place to relax? Byron Bay YHA is a tropical oasis - central to cafes, restaurants, local bars and Byron Beach.
View Details
Newcastle Beach YHA
Opposite Newcastle Beach, and right in the centre of town, this friendly YHA is perfect for travellers looking for affordable accommodation.
View Details