If you’re a lover of long walks over dunes, along windswept cliffs or with the tide lapping at your ankles, you may have come to the right place. In this article, we've dug up some of the best coastal and beach walks across Australia. We’ve tried not to get too granular, but there’s quite a lot of ground to cover, so grab a hat and sunscreen and let's go get some sand between our toes! 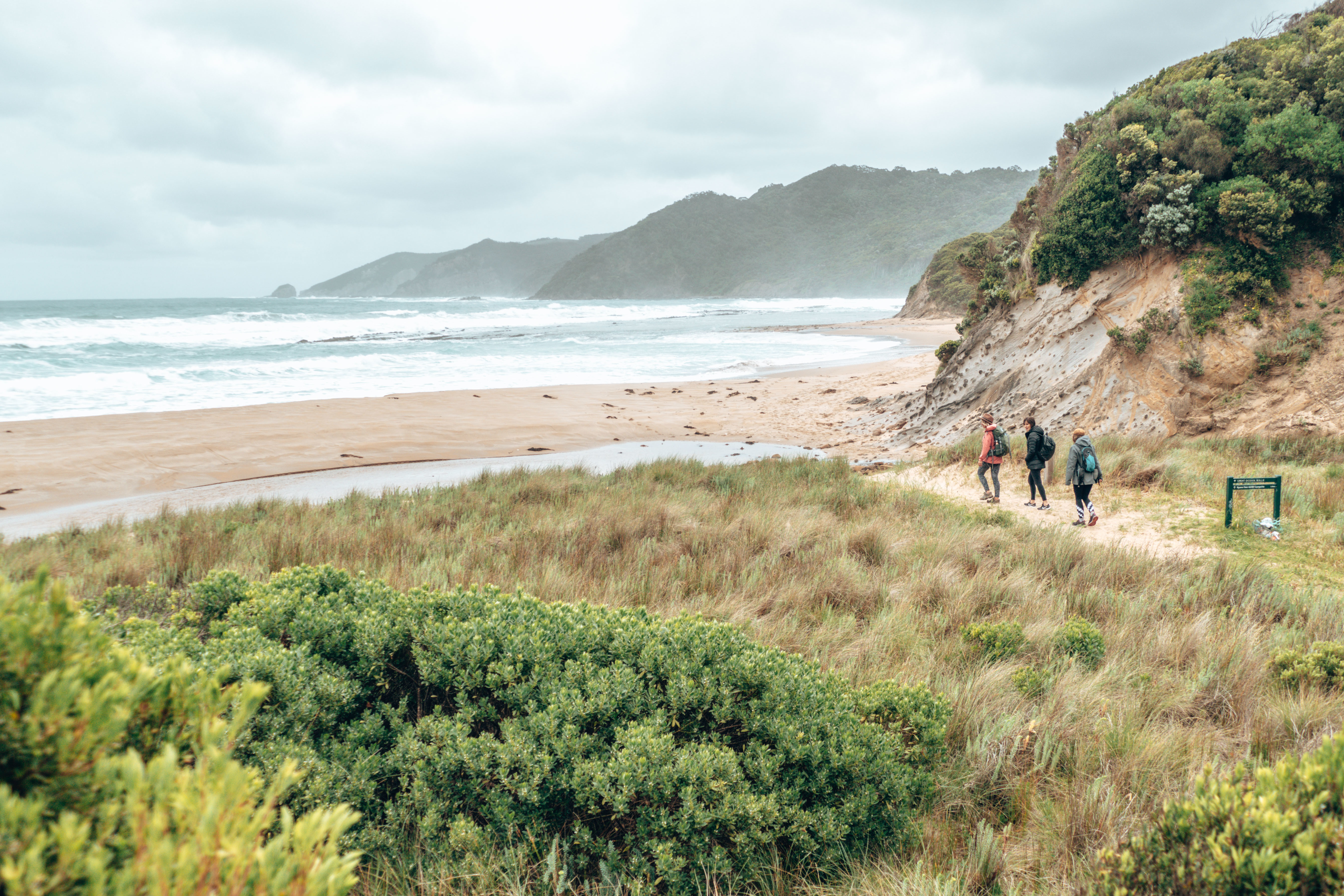 Let's start off strong, with one of the most iconic spots in the whole of Australia. We're sure you've heard of the Great Ocean Road, but the Great Ocean Walk is far-and-away the better way to take in the dramatic coastline of Victoria's south west. The route of the Great Ocean Walk takes you from Apollo Bay, around Cape Otway and into Port Campbell National Park to see check out the Twelve Apostles (and much more) up close. It'll take several days to complete in full, but there are various shorter sections for those whose boots weren't made for walking...

Wending along the south western edge of the Mornington Peninsula, this 30km trail offers a variety of rugged terrain that should satisfy most serious walkers. You'll pass crumbling cliffs and scrubby vegetation in between long stretches of wind-blown beach, all the while taking in impressive views of the Bass Strait. Only the very experienced (and rapid) walkers will be able to complete the whole thing in a day, but there are again shorter sections that can be done as standalone walks if you're not game for the whole thing.

Not everyone has heard of Coogee Beach, but everyone has heard of Bondi, and the paved cliffside walk along the headlands and bays between the two takes you past some of the very best Sydney has to offer. Though only 6km long, you should allow half a day to navigate it due in part to the crowds, and in part to allow for frequent stops to take in the stunning views. We also highly recommend timing your visit for when the Sculpture By the Sea exhibition is on, when part of the walk becomes adorned with all sorts of interesting outdoor artwork. 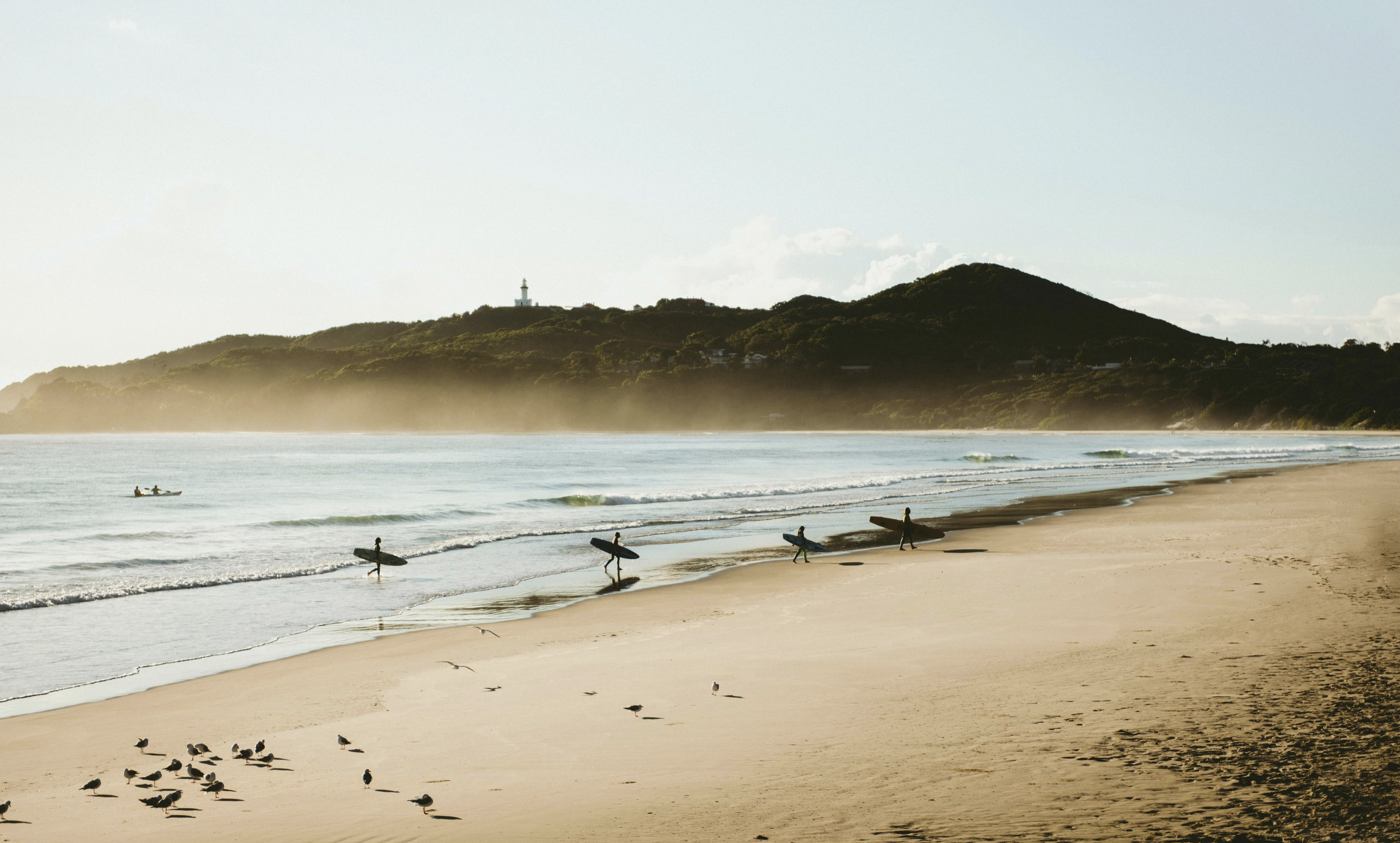 For the purists, who like their seaside strolls consisting of nothing but sand underfoot, Australia has some pretty excellent options. One of the very best is found in northern NSW, where the walk from the chilled out little town of Brunswick Heads to Byron Bay offers a staggering 10km of uninterrupted beach that you can traverse at any speed; from a leisurely amble all the way to a brisk jog. Either way, if you're wearing shoes, you're doing it wrong. 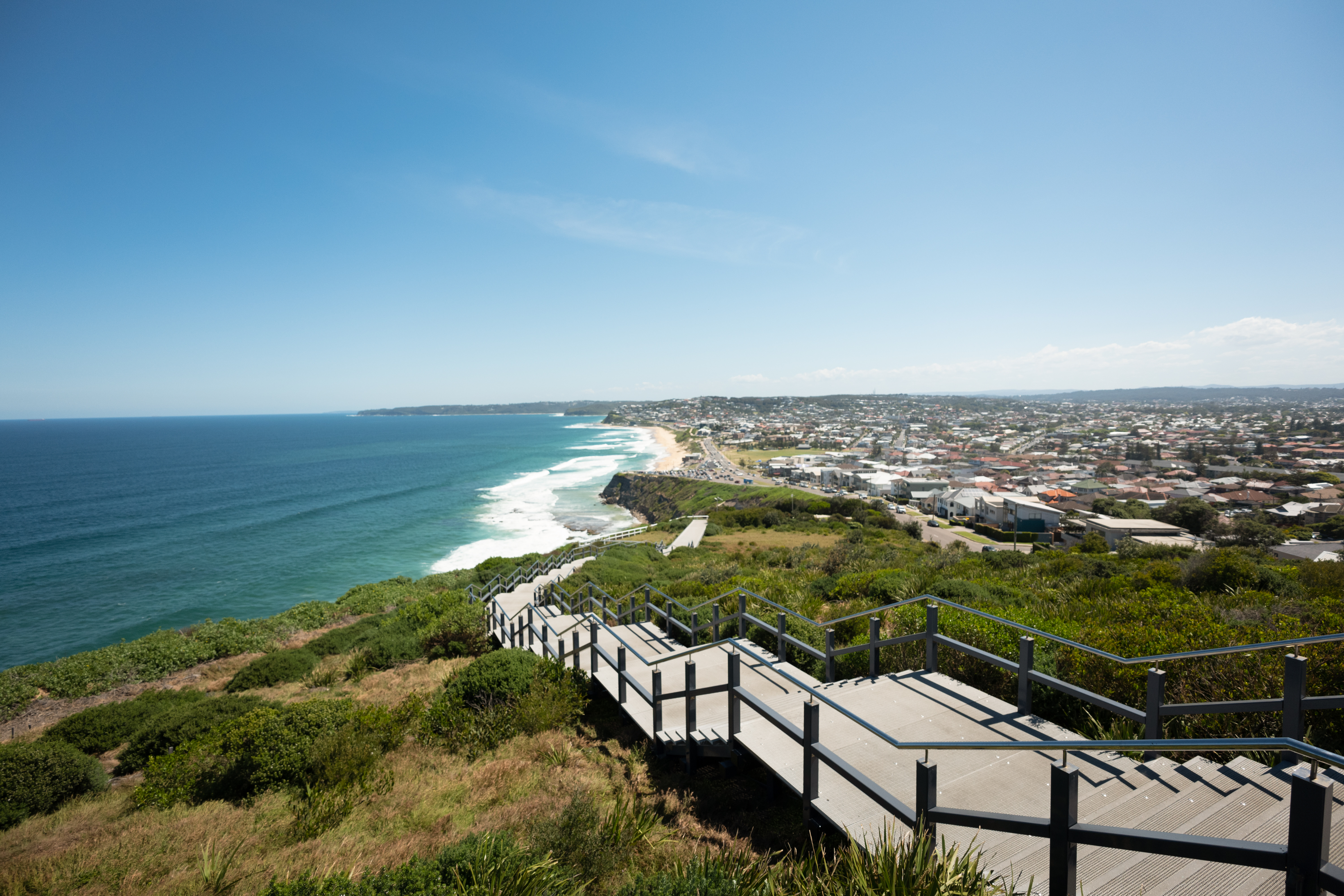 Newcastle is one of NSW's quintessential coastal hubs, with a massive surf culture and a populace that live for the beach despite the area's rapid urbanisation. The 6km-long Bathers Way gives you the perfect snapshot of everything the place is about, taking you from Nobbys Beach to Merewether Ocean Baths (or vice versa), stringing together a number of important local landmarks, picturesque lookouts and military relics. The path is wide and mostly paved, meaning this is a great choice for younger walkers.

Where to stay: Newcastle Beach YHA

Okay, so, we've cheated a bit here. We're not suggesting everyone go and undertake the entire 3-day epic loop around the coast of the stunning Freycinet National Park, but we are suggesting that everyone, at the very least, pick a favourite section and give it a crack. Whether it be wandering along the sand of Hazards Beach, recoinnoitring beautiful Wineglass bay, or taking a detour up Mt Amos to one of the most iconic photo spots in Australia, you'll find some truly breathtaking coastal beauty in this corner of Tasmania. 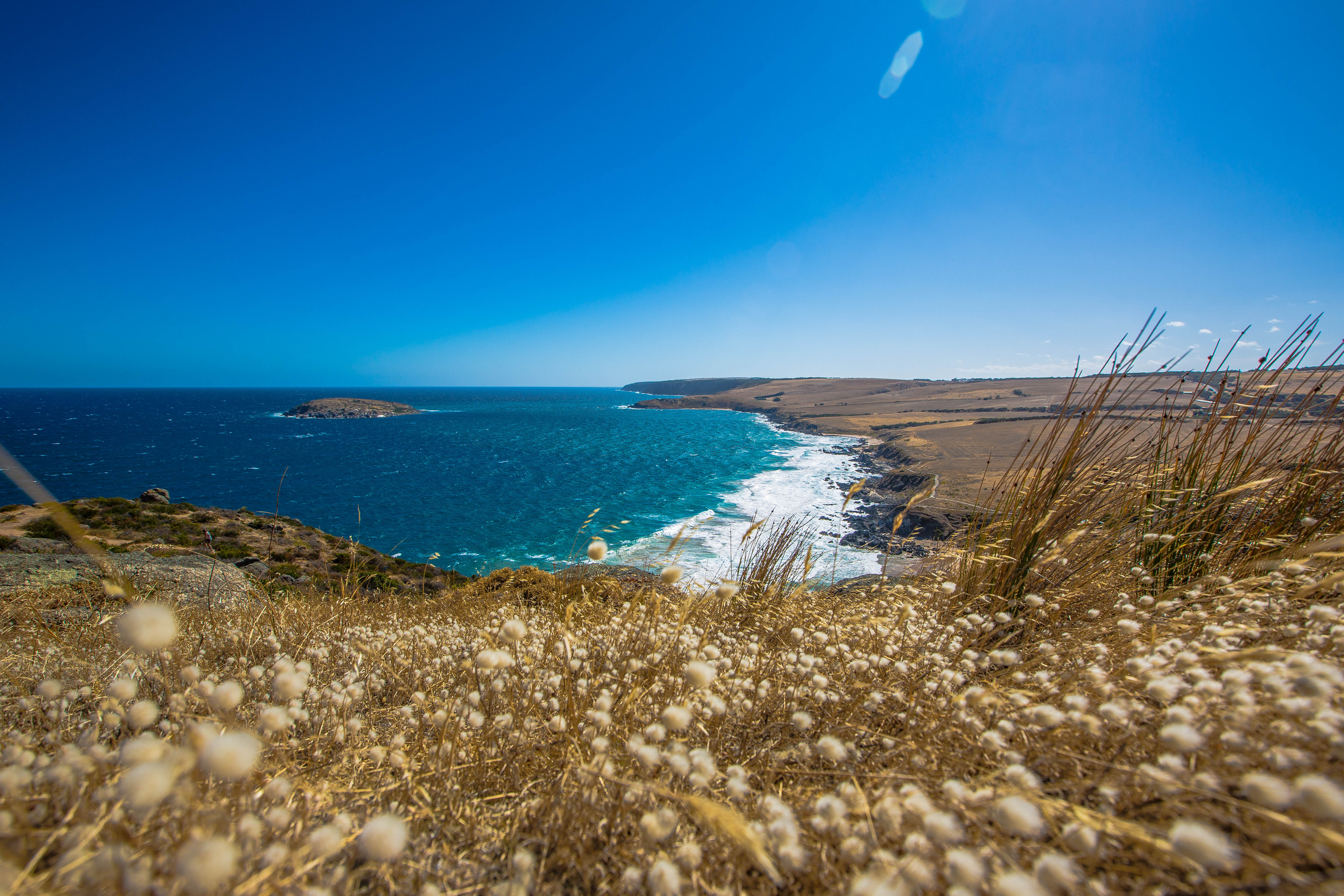 This is another large-scale, multi-day affair, that we nevertheless recommend you try to experience at least part of. With the trail beginning in Cape Jervis and ending in Encounter Bay (pictured), there's a solid 50km of newly upgraded path to tackle along the southern edge of the Fleurieu Peninsula, though you can also choose to join the trail at various points along its journey. This route also forms part of the unbelievably long Heysen Trail, which continues all the way past Adelaide and on to the Flinders Ranges. Maybe skip that one if you just came for the pretty ocean views.

Where to stay: Port Elliot YHA 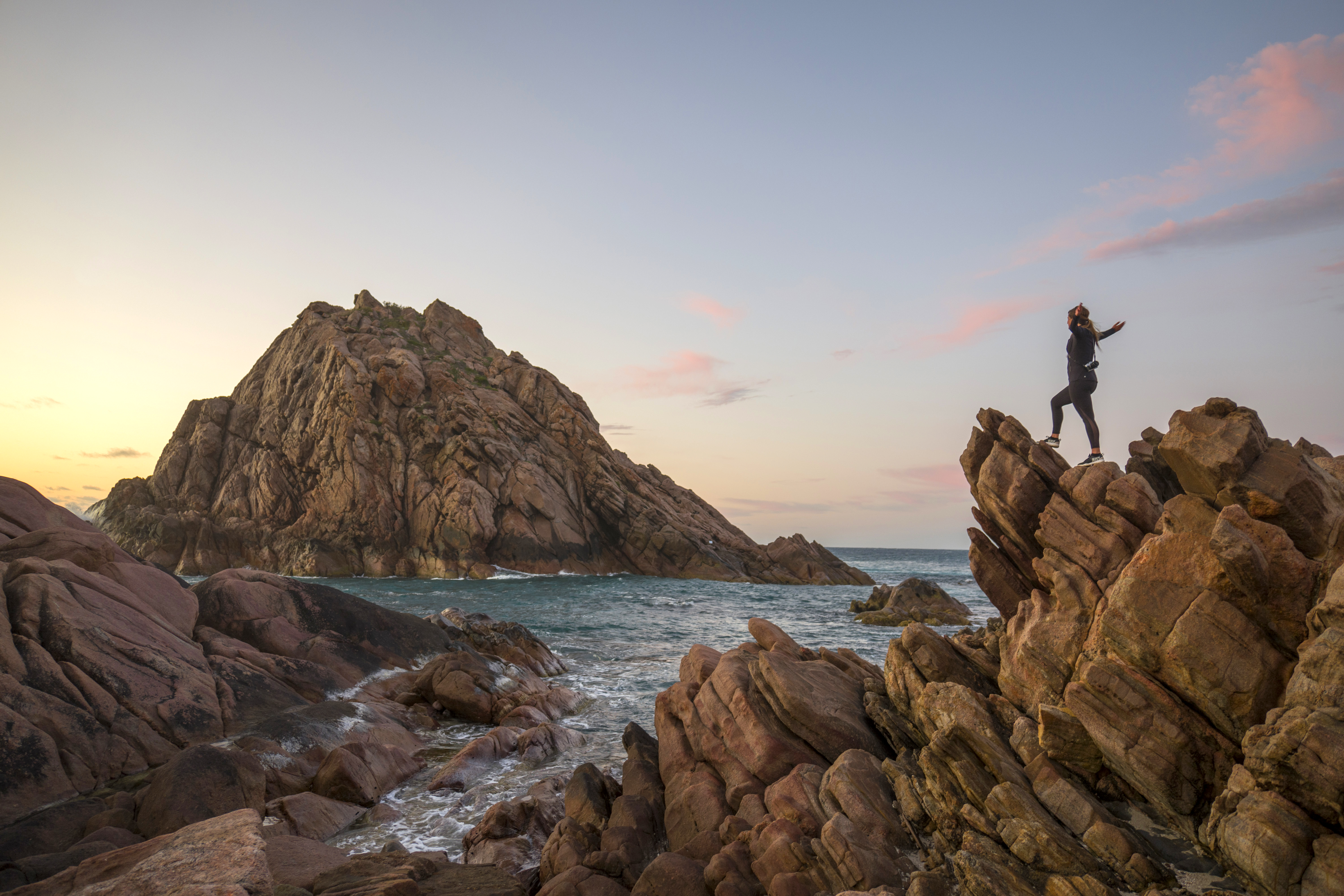 Finally, something a little more laid back! The path from Cape Naturaliste to Sugarloaf Rock along the Leeuwin-Naturaliste Ridge is a wheelchair accessible gem of bitumen and boardwalk that clocks in at around 3.5km in length. Sugarloaf Rock is a beautiful place to see at sunset, and during winter, you might get lucky and spot some whales, or even Orca. There is also the option of continuing another 120km along the Cape to Cape track (which could have made this list on its own) if you're feeling VERY energetic, though the wheelchair access doesn't continue.

Where to stay: Dunsborough YHA Rottnest Island is often known for one thing, and it's usually not its walking trails. But for those with a penchant for coastal capers, the former colonial prison island has much more to offer than just Quokkas. The Karlinyah Bidi, as this route is known, follows the north shore of island from Narrow Neck to Little Armstrong Bay, taking you via some of the most gorgeous beaches you'll find this side of Esperance. It's about 6km in length, so easily done in a morning, and yes, there's a decent chance you'll spot a grinning marsupial lounging out in the sun, too!

Where to stay: Fremantle Prison YHA The Cooloola Recreation Area makes up the southern end of Great Sandy National Park, the northern end of which is K'Gari, the world's largest sand island. Unsurprisingly, Cooloola is also a sand-fest, and the landscapes on offer along the 100(ish)km length of the Great Walk as it heads north from Noosa North Shore to Rainbow Beach are unlike anything else you'll find on this list. Immense sand dunes, natural resevoirs and coastal rainforest abound, though if you can't see yourself doing the full 5 day walk, there's plenty of shorter stretches that'll bring you lots of joy. Definitely aim to go in the cooler months.

Where to stay: Noosa Heads YHA

Apollo Bay Eco YHA
Midway along the famous Great Ocean Road, relax by the wood fire heater, and enjoy ocean views from the rooftop at Apollo Bay Eco YHA.
View Details
Phillip Island YHA
Award-winning Phillip Island YHA is your gateway to one of Australia’s most famous islands. This hostel offers comfortable lounges, a gourmet-style kitchen area and a rooftop deck.
View Details
Newcastle Beach YHA
Opposite Newcastle Beach, and right in the centre of town, this friendly YHA is perfect for travellers looking for affordable accommodation.
View Details
Port Elliot YHA
Great Port Elliot Beach Accommodation! Port Elliot Beach House YHA, on South Australia's spectacular Fleurieu Peninsula, is in a breezy, historic building
View Details
Noosa Heads YHA
This authentic 1880s National Trust and Heritage Listed backpacker hostel is set in the heart of Noosa Heads on the Sunshine Coast.
View Details
Dunsborough YHA
Dunsborough Beachouse YHA is the ideal base to enjoy the attractions of the Margaret River. Close to the vineyards, amazing coastline and unspoiled national parks, you'll love it!
View Details
Coles Bay - Esplanade YHA
Situated in the Coles Bay Township, 1km from the Freycinet National Park, the Iluka Backpackers YHA is over the road from Muirs Beach. On-site facilities at the hostel include tavern/bistro and bakery. There is also a playground for children.
View Details
Melbourne Central YHA
Hip, cool and very Melbourne, Melbourne Central YHA is a trendy travellers hostel located in the heart of the city.
View Details
Melbourne Metro YHA
Only a short free tram ride to the CBD and close to the University of Melbourne and Queen Victoria Market. Melbourne Metro YHA has everything you need for a great stay in cultural Melbourne.
View Details
Sydney Harbour YHA - The Rocks
The only hostel in Sydney that has views of Sydney Harbour, the Sydney Harbour Bridge and the Opera House. Sydney Harbour YHA is the best place to stay in Sydney for the New Years Eve fireworks!
View Details
Sydney Central YHA
Our heritage-listed building, opposite Central Station, is ideally positioned near the Sydney Airport Train line, Darling Harbour, Chinatown and the Powerhouse Museum.
View Details
Byron Bay - Byron Bay YHA
Looking for the perfect place to relax? Byron Bay YHA is a tropical oasis - central to cafes, restaurants, local bars and Byron Beach.
View Details
Byron Bay - Cape Byron YHA
Cape Byron YHA is the perfect place to kick back and relax after a day in the surf. Just across the road from the beach - bike and boogie board hire is available.
View Details
Fremantle Prison YHA
Fancy a historic and unique stay? Fremantle Prison YHA backpackers hostel has what you are after - if you’re feeling brave, sleep in an actual prison cell!
View Details