Get the playlist planned, pull out the old school map, and let's start dreaming of long road trips and all the places to discover!

First thing's first, you've gotta choose your crew carefully.. who can you trust to be your navigator when your phone battery goes dead, who brings the best snacks? Choose brutally, because one person is the difference between the best ever road trip, or listening to 12 hours of country twang. 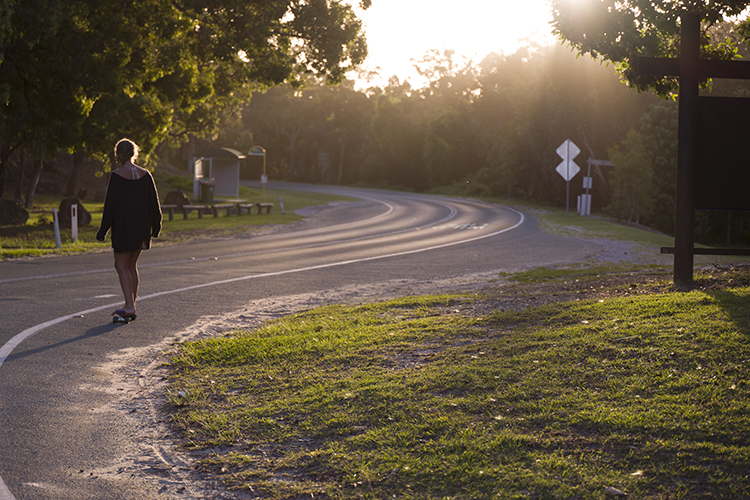 Australia’s most famous touring route straddles the Victorian coast, passing through pristine surf beaches, dramatic clifftops, lush rainforest, and serene seaside towns. Head from Melbourne to Apollo Bay and the Otway Ranges then wind along the Great Ocean Road to the charming fishing village of Port Fairy. The historic port marks the end of the Great Ocean Road but you can continue your journey into South Australia, stopping at the top-rated beachside Port Elliot YHA - with 270-degree ocean views - before finishing up in the great city of Adelaide.

Right to the Middle

You don’t quite realise just how big Australia is until you conquer this pilgrimage from Adelaide to Alice through the continent’s beating red heart, a vast expanse of ochre red dust only interrupted by a few dry shrubs and an endless strip of bitumen known as the Stuart Highway.

Pack plenty of water, some spare fuel, and some energy drink and you'll be crusin' down the highway all night long! Itinerary: Sydney > too many awesome pit stops to mention > Cairns

With 20-odd YHA hostels lining the East Coast of Australia, a road trip from Sydney to Cairns is a ‘choose your own adventure’ scenario.

The beaches of NSW’s North Coast. Hippie hotspots like Byron Bay, Nimbin and Murwillumbah. Surfing on the Gold Coast. Diving on Stradbroke Island. The Great Barrier Reef and tropical islands in North Queensland – we’ve even got an on-site wildlife sanctuary at Magnetic Island YHA packed with koalas waiting for a cuddle.

Hey, there’s so much to do on this route, why not extend your trip out for another week, soak up the sun! There’s no shortage of treats waiting for travellers on the West Coast, either. Head north from Perth to the sandboarding and windsurfing hub of Lancelin, then pop into the iconic Pinnacles Desert on the way to Kalbarri and its arresting national park.

Feed the dolphins in Monkey Mia before stopping in Exmouth for your Ningaloo Reef whale shark experience, then continue north to Broome, the multicultural resort town boasting famous sunsets over Cable Beach. This road trip's a biggie, so if you're a little nervous about trekking across the Wild West of Australia, join our 10 Day Perth - Broome Tour for the ultimate adventure, all planned out for you! Every visitor to Australia has Sydney and Melbourne near the top of their to-do list – and rightly so, too. But flying from one of the country’s two biggest cities to the other skips over stacks of scenic terrain.

Just three hours south of Sydney is Canberra, home to a treasure trove of great (and free!) museums and attractions as well as an increasingly cool food and drink scene, then it’s another three hours to Thredbo, a winter ski resort that’s equally worth a visit in the warmer months for its bike trails and alpine hikes, including Australia’s highest peak, Mt Kosciuszko. Melbourne Metro YHA
Only a short free tram ride to the CBD and close to the University of Melbourne and Queen Victoria Market. Melbourne Metro YHA has everything you need for a great stay in cultural Melbourne.
View Details
Apollo Bay Eco YHA
Midway along the famous Great Ocean Road, relax by the wood fire heater, and enjoy ocean views from the rooftop at Apollo Bay Eco YHA.
View Details
Port Fairy YHA
Port Fairy YHA is a heritage listed cottage situated in charming and historic Port Fairy at the end of the Great Ocean Road. Relax by the open fireplace after a day of exploring a piece of Victoria's history.
View Details
Port Elliot YHA
Great Port Elliot Beach Accommodation! Port Elliot Beach House YHA, on South Australia's spectacular Fleurieu Peninsula, is in a breezy, historic building
View Details
Adelaide Central YHA
Located right in the centre of the city, Adelaide Central YHA is only a 7-minute walk to Adelaide Central Market and a short bus ride to Adelaide Festival Centre and Adelaide Zoo.
View Details
Alice Springs YHA
Alice Springs YHA traveller hostel is built within the grounds of an historic outdoor cinema. Make sure you book your accommodation with us, for nightly movies under the stars!
View Details
10 Perth to Broome Overland Tour
From $2195
Discover desert landscapes, national parks and sublime Coral Coast on this ultimate small group overland adventure. Includes 2 free nights with YHA before and after your tour.
View Details