See, sleep, or stuff your face

Planning your next weekend away? Here are three great getaway ideas in every corner of the country. Batemans Bay on the south coast is home to the most Australian photo you could possibly upload on your Instagram: kangaroos hopping along the sand at Pebbly Beach, itself a gorgeous stretch of coast surrounded by national park. Don’t miss the white sand of Hyams Beach up the road on the way back to Sydney, either.

Stuff your face in the Hunter Valley Two hours’ drive north of Sydney lies Australia’s oldest wine region, brimming with dozens of cellar doors inviting visitors for a world-class wine and a bite to eat. You can stay right in the heart of wine country at Hunter Valley YHA, which even has its own vines. Step back in time to the Roaring Twenties at this immaculately maintained Art Deco property, which still has its ballroom and old sprung-wood dancefloor intact. Located just two hours west of Sydney, this Katoomba hostel is your launching pad to explore the gorgeous Blue Mountains region. If you’ve always said to yourself, ‘Geez, I really should road trip the Great Ocean Road someday’, what are you waiting for? Cruise your way along this dramatic coastal drive and don’t forget to tag #YHAoz on your snaps of the Twelve Apostles and Loch Ard Gorge.

Stuff your face at the Queen Victoria Market Melbourne boasts more fantastic food and drink experiences than it does dodgy hipster man buns, but one of the most special is the Southern Hemisphere’s largest open-air market. The Queen Vic is open Tuesday then Thursday to Sunday, plus hosts a night market seasonally in winter and summer. Weekends away don’t get any more serene than an escape to the Grampians, just three hours’ drive west of Melbourne. Explore the spectacular terrain of the Grampians National Park by day then retire to the purpose-built eco-friendly property at night. The paradise known as Moreton Island is an easy day trip from Brisbane, making for the perfect weekend escape. Explore the golden sand beaches as well as the rusty red ship wrecks on a guided snorkel tour of the photogenic Tangalooma Wrecks.

Stuff your face on seafood The sunshine state is famous for its fruits of the sea, and tropical Cairns is no exception. It seems like every restaurant along the Esplanade is plating up huge seafood dishes – caught fresh that day, of course. Only two hours north of Brisbane, Noosa is a dream place to unwind – especially at this heritage-listed guesthouse dating back to the 1880s, surrounded by acres of luscious forest and home to its own on-site bar and restaurant. The land of the quokka is just a quick ferry from Fremantle or Perth, but this car-free island paradise feels a world away. Rent a bike and pedal between Rotto’s endless trail of pristine white-sand beaches.

Stuff your face at the Little Creatures brewery Historic Fremantle is famous for its prison, its port, and its pints of Little Creatures, poured fresh from the source at this atmospheric converted warehouse set right on the waterfront. Fremantle Prison YHA – a modern hostel in the women’s wing of the old lock-up – is within stumbling distance.

This lively beach house is exactly that – a beach house – enjoying million-dollar views of the waves across its back lawn. Don’t miss Margaret River wine country half-an-hour down the road, either. Perched right on the doorstep of the city, the leafy Adelaide Hills are home to charming villages, gourmet eateries and wonderful wineries. The gentle climb up to Mount Lofty is not only rewarded with panoramic views over Adelaide, but also a visit to Australia’s oldest surviving hostel, Mount Lofty YHA. This rugged corner of SA is home to some of Australia’s finest seafood, including oysters (farm pictured above), prawns, scallops, tuna and abalone reeled in from the region’s waters. You’ll feel like you’re the one on the menu if you’re brave enough to tackle a shark cage dive from Port Lincoln, too.

Just an hour from Adelaide, this stunning sandstone guesthouse offers 270-degree views of Horseshoe Bay, and provides a comfortable base for exploring all the coastal treats the Fleurieu Peninsula has to offer.

Step through history at this this historic convict prison 90 minutes from Hobart. Thirty buildings remain standing as an open-air museum preserving Tasmania’s colonial past, and providing a haunting addition to the craggy coastal scenery.

Stuff your face on Bruny Island Why would you want to stay anywhere else other than this recently renovated property right in the heart of the action, just a couple of blocks’ stroll from Constitution Dock and Hobart’s picturesque waterfront.

See crocodiles up close and personal

Right next door to Darwin YHA – Melaleuca on Mitchell is a slice of the Top End wilderness. Crocosaurus Cove is crawling with six-metre-long salties – and you can stare these enormous crocs in the eye from inside the ‘Cage of Death’, a clear cylinder that’s dunked into the crocodiles’ backyard.

Stuff your face at the Mindil Beach Sunset Markets Authentic Asian food, relaxed vibes, parkland overlooking the ocean, warm tropical weather – conditions don’t get much better for a sunset market than Mindil Beach during Dry Season (May to October), one of the Top End’s top attractions. This hostel began life as an outdoor cinema theatre in the 1940s, but has transformed into the perfect home base to explore Australia’s epic Red Centre, including tours to Uluru, Kings Canyon and Kata Tjuta. These 94 forests of rare, endangered and symbolic trees from across Australia and throughout the world are still maturing, but the National Arboretum’s 250 hectares of botanic beauty already provide a striking landscape for visitors to walk, drive, cycle or even horse-ride around. Coffee snobs will suffer no shortage of places to get their caffeine fix in the nation’s capital, particularly along Lonsdale Street in the Braddon precinct and around leafy Manuka. This modern property has plenty of private rooms for your weekend away in the capital, as well as an uber-central location that makes it a breeze to get around town. 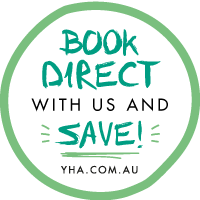 Book Direct and Save

Booking directly on yha.com.au gives you various advantages such as best price guaranteed, more room choice and much more!