11 Most Australian Things That Happened in 2019

From kangaroos harassing paragliders, to dads in their undies scaring away home invaders armed with didgeridoos - we provide a little insight into the year that was in Australia.

In March this year, a paraglider had been, well, paragliding, for two hours near Canberra when he eventually made a safe landing…or so he thought. Footage shows a kangaroo bounding towards him as soon as he lands. Making polite conversation, the paraglider enquired “What’s up, Skip?” only to be charged at twice. However, apparently they seemed to respond to his confident rebuffs of “F*ck off!”, so you can always keep that in mind should you ever encounter an unfriendly kangaroo in the wild (don't worry though, they'll usually leave you alone unless you get too close!) What really makes the video, though, is his mutter of “f*cking kangaroos” when the roo eventually goes away. Hey, they outnumber Australia’s residents nearly 2 to 1. An irritated mutter of *f*cking kangaroos* is basically an Australian proverb at this stage.

McLaren Vale is a beautiful wine region in South Australia, surrounded by stunning bushland and abundant with Aussie wildlife of all sorts. In March this year, a McLaren Vale winemaker left his car’s doors and windows open, should his dog wish to get out and wander while he was attending to some business. He got an interesting surprise when he returned to his car, to find a koala had made itself at home in the air-conditioned vehicle. He appears to be getting to know his dog, and enjoying the cool air. It took some convincing – especially when the koala decided he wanted to ride shotgun – but eventually the little guy was coerced out of the vehicle and bounded back towards the trees, probably to sleep for another 18 hours.

Another koala checks out a family’s CD collection

“Got any Acca Dacca, mate?” An Adelaide Hills family was startled awake at 2am on a hot January evening, by scratching noises coming from their living room. Terrified there may be a burglar in the house, they approached with caution, flipped the light on…and couldn’t believe what they were seeing. A koala had apparently taken advantage of the open back door, invited himself in and took it upon himself to examine the family’s CD collection. Apparently, he was unimpressed by the lack of Aussie rockers represented, and then turned his attention to climbing all over the tables and chairs. After 20 minutes, the family managed to usher him out the door from whence he came, and he quite happily found a tree to settle in after his late night outing. There’s a very valuable lesson in this: if you live near the bush in Australia, always be prepared for a koala to judge you on your music collection.

An Adelaide dad ran down a home invader in his undies, armed with a didgeridoo

You read that right…the headlines truly write themselves in this country. A suburban Adelaide father went viral in June this year when he shared his story of catching a home invader in his house. Dressed in nothing but his undies, he chased the culprit onto the street brandishing his weapon of choice…a didgeridoo. He and a few of his neighbours managed to detain the invader until police arrived, but what really makes this story is the fact he very kindly re-enacted his epic pursuit for several news organisations. He became an internet sensation, and even starred in a fruit shop ad for a local Adelaide store. You’ll also be relieved to know that after 13 years of keeping it open, this incident has prompted the hero to lock his front door at last. Ah well, live and learn…

Yep, this one is exactly how it sounds. It was a quiet January afternoon in Brisbane’s west, when a woman went into her bathroom to use the toilet. She didn’t turn on the light. She sat down to do her business, until a sharp pain in her backside caused her to jump up with shock. To her horror, she saw a 1.6 metre carpet python sitting in her toilet, who was clearly not happy to have its afternoon chill-out sesh rudely interrupted by someone relieving themselves ("mid-stream" was the word used). Thankfully, carpet pythons are completely non-venomous, and all she needed was a bit of antiseptic spray applied to the small puncture marks on her…yeah. Snake catchers were called to the bizarre scene without incident, the snake was evicted from the toilet and the lady vowed to always turn her lights on, and check the toilet, from that point on. Don’t worry, this isn’t a common occurrence in Australia – but if this ever happens to you, don’t flush!

In September this year, the Federal Government of Australia was faced with their most pressing challenge yet. The Parliament House in Canberra was being overrun by magpies swooping everyone during their nesting season, as well as a huge boom of ducks defecating wherever they pleased. The experts tried everything from flying a kite shaped like an eagle, to playing intimidating bird noises over the speakers – all to no avail. So what did they do? They brought in three predatory birds to form a police force of sorts: consisting of a peregrine falcon named Floyd, a barking owl named Wot and a goshawk named Tilley. Their collective presence has proven successful in chasing the unsavoury birds away, and the clothes (and hot chips) of Parliament House employees and tourists are safe once again. We think the best part of this article is the fact it was filed under “Politics”.

Alexa, play “We’re Not Gonna Take It” by Twisted Sister. One of Australia’s plentiful sulphur-crested cockatoos made headlines in July, when it was captured successfully removing anti-nesting spikes on a building in the Blue Mountains. Bird experts weren’t surprised at this behaviour - cockatoos are not only extremely intelligent, but notorious for taking delight in causing mischief. Unlike koalas, the food cockatoos eat is also highly nutritious and easy obtainable, so basically they have a lot of spare time to wreak havoc any way they can. Rumour has it this particular cockatoo is a regular in the Katoomba area, whose favourite hobby is conning tourists out of their food, just down the street from the scene of the crime. Also, in true Aussie fashion, the video was titled “F*ck the police” when it was initially posted to Facebook.

A Tasmanian home is placed under siege…by little penguins 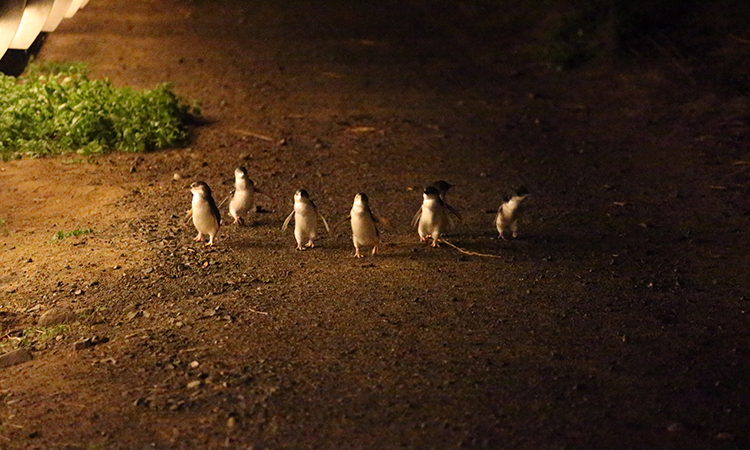 Cockatoos aren’t the only Aussie birds who like making a scene. A Tasmanian couple shared one of the most wholesome news stories of the year this January, when they revealed that hundreds of little penguins have set up camp in the backyard of their coastal home. During breeding season, the couple have become used to finding penguins under their car, pressing their beaks against the windows and literally knocking on the door every night. The little guys spend the day fishing in Bass Strait, and then clumsily return to their “home” at night, making a huge racket in the process. On one occasion, a guest was visiting the couple at their home, and two penguins decided his shoes would be an excellent spot to mate. If being surrounded by penguins sounds like a dream, you can see the famous penguin parade on Phillip Island, and see if any follow you back to Phillip Island YHA!

We threw a birthday party for quokkas, because of course we did

When you have a native animal this cute, it’s important to celebrate it! With the “happiest animal on earth” being credited for driving tourism numbers to Western Australia, the weekend of September 13 to 15 was declared the inaugural “quokka birthday party.” It was a three day celebration of all things quokka, which is also set to become an annual event and a highlight on the Rottnest Island calendar. Everyone was invited to celebrate the smiley critters, with the festivities involving walking tours, scavenger hunts, a special movie screening and most importantly, the opportunity to learn everything there is to know about quokkas from the experts. Quokka selfies were taken, plenty of fun was had and it was an overall fabulous weekend. If you want to get amongst the action next year, first read about quokkas here, then book your stay at Fremantle Prison YHA!

One of Australia’s most popular TV shows of all time centres on an eccentric Aussie mother and her grown daughter living in suburban Melbourne. The show, which shines a spotlight on everything ridiculous about Aussie culture, quickly became a cult hit – not just in Australia, but around the world. There was even an attempt to make a US version of it – but it’s that dry, Aussie humour that really makes the show iconic. In July this year, Aussies rejoiced when all seasons of the show were put on Netflix, and we were able to relive the very moments when terms such as “hornbag,” “ravishing,” “foxy” and “gropable” became staples of Aussie lingo. So, if you’ve got access to Netflix Australia, fire up Kath & Kim for a…unique insight into what it means to be Aussie. P.S. - You’ll also spot a glittering array of Aussie guest stars, such as pop princess Kylie Minogue, actor Eric Bana and iconic cricketer Shane Warne.

A kangaroo broke into a Canberra home to steal Vegemite

We had to finish off this list on a high note with one of the most ridiculous stories to come out of 2019. At the end of September, a new mother kangaroo (with joey in tow) decided to break into a family’s holiday cabin in Canberra. In possibly the most Australian thing ever, the kangaroo took several swipes at a jar of Vegemite on the counter, and actually got a grip on it before knocking it down to the floor. It then proceeded to try to steal some Smith's Salt & Vinegar chips, an Aussie snack featured prominently at most parties and BBQs. Eventually, the intruder reluctantly left without incident, so we’ll never know her thoughts on Australia’s most iconic spread. Possibly the best part of this story, is that the family was hosting a German exchange student at the time...who then had to be convinced that this definitely is not a regular occurrence in Australia!