Bangkok Engulfs But Never Sleeps - We Discover How To Find Peace Among All The Energising Excesses! By Ewen Bell 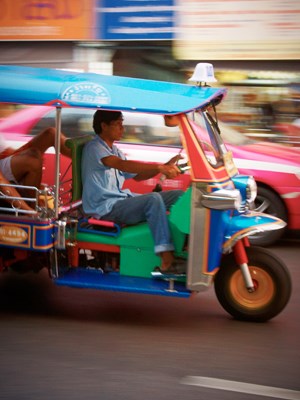 My first visit to Bangkok was after crossing the border from Cambodia, with our bus crawling into town late on a Friday afternoon. Greeted with gridlock it took two hours to reach the hostel. This is the city I learned to love above all others in Asia, just not so much the traffic.

The Chao Praya River is the key the character of the city, the heart of Bangkok's charm. Getting up and down town on the river is still the preferred mode of transport. The clogged city streets were once a massive network of khlongs that fed off the Chao Praya, and to this day the buses and trains still link in with the express ferries.

A few of the old khlongs are still open and navigable, often providing a faster route for racing across the city than even the most insane of tuk tuk drivers. And they are insane. Motorbike taxis are more reliable, more honest and a lot cheaper than most tuk tuks.

Every aspect of the city can be seen from the river, including temples, produce markets and family homes. Children dangle fishing lines in the same spot they scrub the laundry. Seafood on the streets of Bangkok is almost as fresh as if it had been pulled out of the river. Every morning boats come up stream to unload their catch from the Gulf of Thailand.

For just over AUD$1 you can feed up on rice or noodles for breakfast, lunch or dinner. Savoury and spicy suits the steamy climate at any time of day. Prawns, squid or crab meat are matched up with coriander, chili and fish sauce plus any number of traditional cooking ingredients. Fast food is good food in Bangkok, good for you and filled with salty flavours that replenish your body.

Food comes naturally to the Thai, like breathing or walking, and travellers get spoiled night and day as a consequence. After dark the street corners fill up with tables and smoke fills the night air. Eating on the street delivers a varied seduction at budget prices. Seafood, vegetarian and fresh produce are all in abundance around Khao San Road, Siam and anywhere along the river side.

If you're visiting Chatachuk weekend market then keep an eye out for the Northern Thai style kitchens too, serving super spicy dishes and lots of coriander. Stay cool as you shop with frozen soda sticks at the market for just 2 cents a pop. 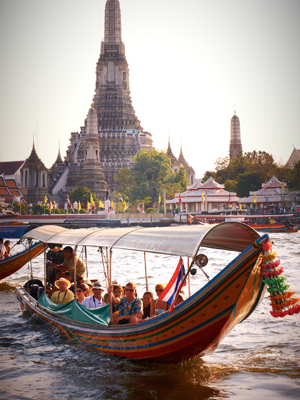 The Chao Praya also divides the city of Bangkok from the old capital of Thonburi. This is where you'll find the ‘Temple of the Dawn’, Wat Arun, a short ferry ride across the river from Wat Pho and the Royal Palace. It's a golden mile of ancient treasures with reclining Buddhas, gilded temples and a massage school in every direction.

$5 worth of traditional massage treatment goes a long way around here, lasting an hour but leaving a few muscles in pain for the whole day. It is good karma for the girls training for better paid work, and anything that hurts this much has to be good for you too.

The best bargain in town is the number 53 bus that connects Wat Pho with the night life on Khao San Rd. Look for the blue and white banner above the driver and ride the bus for free. Every second bus on route #53 is free for everybody, and the others cost 10 Bhat, about 35 cents.

Between Wat Po and Khao San Road the #53 passes the mayhem of Bangkok's Buddha Market. Monks come here to shop for amulets of their most revered teachers and images of the Buddha. From the street it looks like a traffic jam, but head down the sheltered lanes and you enter a world of Buddha abundance. Many vendors sell genuine antiques, but you'll also find mountains of tiny treasures that are both light and enlightened.

There's a river ferry stop at the Buddha Market too, called Tha Chang Pier, which can get you back up town in style if the bus route looks a little busy. It can cost two to three times a bus ride but you get the river views for free. 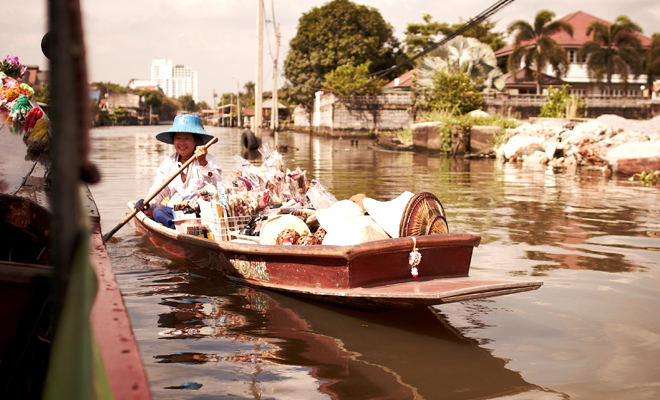